Other than the steeply-raked rear cutaway, which allows the Challenger X-Treme to negotiate steep inclines without dragging its tail, the exterior is otherwise conventional – ribbed silver aluminium cladding over a meranti timber wall frame with styrene foam in between the batons for insulation. Look underneath and you’ll be impressed by the galvanised, one-piece under-floor; the water tank stone shielding; the standard gas barbecue bayonet; and the sturdy Al-Ko offroad corner stabilisers.

With an RRP of $66,990 plus on-road costs, it is priced about $15,000-$20,000 less than you would expect to pay for a similarly-specced van of its size from one of the established offroad specialists. 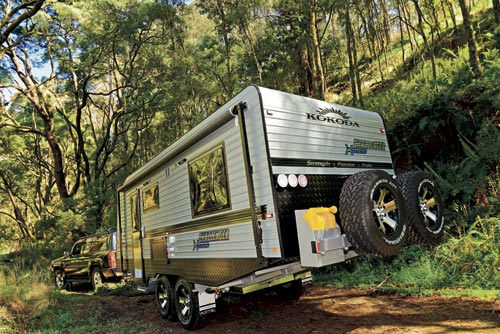 Looking at the spec sheet, it’s hard not to be impressed with the Challenger X-Treme – particularly with all the usual ‘extras’ which are include at the price.

For a start, it has two of all of the important offroad things, such as tandem axles with twin shock absorbers for each 16in alloy wheel; twin 95L water tanks, each with its own external filler waste pipe and pump (so that you can fill them separately to increase or relieve towball load); dual 110A deep-cycle batteries; dual 150W roof-mounted solar panels with a 30A regulator; twin rear jerry can holders; and dual 16in spare wheels with 275/75 section General Grabber AT2 offroad tyres on its galvanised steel rear bumper.

The van has a good-sized front boot behind black checkerplate stone protection but there’s no tunnel boot because of the van’s front ensuite but, instead, there is a good-sized checkerplate-lined locker on the front offside corner which is ideal for holding all manner of things, including a generator. There’s also an external shower on the rear offside corner – something that’s usually an extra-cost option at this price.

Inside, the bed lifts up on hinges but, because of the van’s sharply-raked rear end, usable storage is really limited to the front section.

Inside, the Challenger X-Treme shows reassuring attention to detail and some innovation.

Entering through the front door and the separate shower/toilet ensuite is immediately to your left. There’s a short wardrobe/linen press next to the Thetford swivel toilet, while the fibreglass shower cubicle opposite is separated by a vanity unit with a ceramic washbowl and the 2.2kg top-loading washing machine is hidden under a hinged benchtop lid.

The 175L 12V Waeco fridge/freezer is opposite the door, next to a café-style dinette with its tri-fold table.

The kitchen along the nearside wall has good bench space, a large home kitchen-sized stainless-steel sink with a separate tap for filtered water, a combo four-burner cooktop with gas grill below and a microwave at a safe, sensible height.

In the rear of the van, you’ll find an island north-south queen-sized bed with mirrored-door robes each side, large overhead clothing cupboards and bedside tables. Further examples of attention to detail include the Challenger’s piano hinges on all cupboards – important for a van likely to be subject to offroad corrugations – while the floor is ‘floating’ one-piece vinyl.

Many manufacturers are adding more features to their vans and giving them all-road capabilities to make them more attractive in what has become a very competitive $60,000-plus marketplace, but the Kokoda’s toughness genuinely looks built in, with a lot of thought given to detail.

Let’s just say that, at its price, it ticks all the right boxes.