Ride in comfort with a pop-top Prince Caravan Review

Given the current economic scene, the pickings are getting better for those who are looking around to get a new caravan. The packages are getting more attractive as manufacturers put more features in for even less money. If you can find a caravan that’s been on the block for a few weeks, there’s a chance that you could secure a really good deal.

On the other side of the equation, with the falling Aussie dollar, imported items are becoming more expensive, and because many components in caravans are sourced from overseas, costs are rising. You may need to move smartly to find a van that was built before the cost of imported components went high and financials went wobbly.

An example of excellent value for money is Coronet’s Grand Prince pop-top Shower Van (Coronet’s Grand Prince models are those with a shower and toilet compartment). For less than $44,000, here is a tandem-axle pop-top van that would suit a couple planning their long-term circuit of Australia – provided that they stay on reasonable surfaces as this van isn’t intended to be a bush-basher. 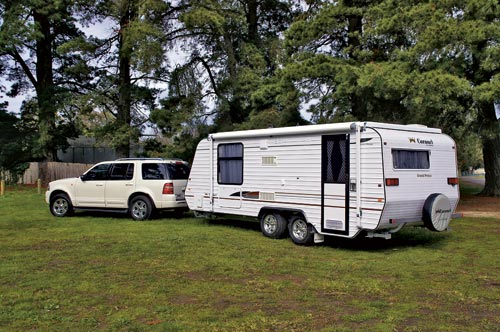 Although the package comes in at a quite attractive price, there are no obvious indications of skimping on quality or features. In fact, the van has pretty much all that a couple intent on highway cruising and beachside holidaying would wish for.

Using a conventional 100mm chassis, the caravan is supported on tandem beam axles with six-leaf springs, and rolls on smart-looking, alloy, five-stud, 14x6 wheels fitted with Maxway 195x14 eight-ply-rated tyres. During my crawl under the van I noted that the wiring to the 10in electric brakes was properly secured to the backing plates – a hint of care that’s sometimes missing in today’s market. Because the unit has an ATM of 2140kg, it is fitted with emergency electric brakes that operate if the van breaks away from the tow vehicle. There’s a single spare wheel mounted on the rear bumper.

Up front on the A-frame a pair of 9kg LPG bottles with quick release clamps sit just behind the jockey wheel clamp. There’s a brass bib water tap on the offside of the A-frame – a convenient idea which might benefit by having a stone protector in front of it. The front of the van has a stylish rake to it, with a big boot and a hinged stoneguard to protect the bedhead window.

The 12V electricals are located in the boot. The charger is a quite adequate capacity and well-designed, three-stage, switch-mode, 20A appliance to top up a single, 105Ah, zero-maintenance battery. Having a light in the boot is a sensible provision and there’s even a 240V powerpoint in the boot. Inside the caravan, the low-voltage lighting consists of three ceiling fluorescents that have good light distribution. There are halogen lights beside the dinette table and at the bedhead. The stove and adjacent work area depend on the lighting from the rangehood; the large sink and sideboard gets its own fluorescent.

As indicated by the floor plan, the kitchen and food area is toward the rear of the van. The sink and the wide benchtop either side have plenty of light from the rear window. Cooking activities are on the nearside.

A Swift 500 cooker with three gas burners and one electric hotplate, supplemented by a gas griller underneath, are all standard fittings. An enormous pot drawer is located below the griller, and no less than six additional storage drawers are fitted below the bench and a couple of small ones above it.

The reverse air-conditioner outlet and a 23L Samsung microwave sit side by side above an elevated 121L three-way Dometic refrigerator. The refrigerator is superbly positioned for those sitting at the dinette to reach across and take out any cool drinks to use at the table. By anyone’s reckoning, there’s enough food storage space to keep two people going for at least a month!

Included in the Grand Prince package is a remote-controlled JVC entertainment unit with AM/FM/CD/DVD capability. This unit, which is the signal source for the 17in flatscreen TV and the ceiling speakers, is mounted at the rear in the eye-level cupboard above the sink. It is conveniently possible to view the TV while in bed, but who would be as decadent as that?

Also included is one of those Winegard rooftop antennas that is controlled from inside the van – how easy can life be? Other creature comforts are a Heron 3kW reverse-cycle air-conditioner for climate-setting inside the van, and the Dometic Sunchaser awning for outside relaxing.

A drop-down table under the awning provides an alternative to getting lawn clippings on the bottom of your chardonnay glasses as you watch the sun set over the bay in the evening.

Excursions away from civilisation would be possible as the van has plenty of gas for cooking, refrigeration and hot water, plus a water capacity of 160L courtesy of two metal-protected tanks with a remote water level indicator.

The dinette arrangement is entirely satisfactory for meals and playing cards, but for TV viewing and general lounging about, some may see it as restrictive. Although four people can sit at the table, the wheel box intrudes into leg space, and there wouldn’t be a rush to sit next to the window because of that.

What does impress is the cabinetwork and the remarkable amount of storage. Drawers and doors have push buttons with handles, so they are easily graspable. The apparent size of the wardrobe on the offside is deceptive because some space is stolen by the air-conditioner. But then there are no less than 10 overhead cupboards in this van and mirrored doors on the robes, and there’s no sense of being cramped anywhere.

The only item I spotted that could do with a little re-design was the shower door. Water running down the inside of the door could drip onto the floor. By fitting a 10mm spoon gutter on the door inner surface near the bottom, this water would be collected and drained onto the shower floor. It’s a very small point. The review van was part of a new exercise by a new contract builder for Coronet, so they may have picked up on this point before this review was published.

All in all, at $43,990 as reviewed, this van has to be a top contender in the value-for-dollar stakes at present. How long it will be before prices must rise is anyone’s guess, but it’s not likely to stay at the current price for long – quite simply, this offering has too many goodies to last.