WHILE IT MAY BE easy to say that all caravans of a given length are much the same, that proved to not be the case when we took a close look at the Karijini from Western Caravans. One of four models in Western Caravans' Park Range, this 5.94m (19ft 6in) caravan has some very likeable features.

The Park Range has been developed as a smaller, lighter and more economical alternative to the larger luxury vans in the Homestead Range. The standout feature of the smaller range is that despite modest size, space has still been found for a bathroom.

Western Caravans is a WA company and it has named each Park model after national parks in the state. The Serpentine is named after a park in the Darling Range south of Perth, and the Tuart is named after the Ludlow Tuart Forest NP near Busselton in the south-west. Both are 5.64m (18ft 6in) vans with a small combined shower and toilet in the rear offside corner. The 5.94m (19ft 6in) Ningaloo, also with a rear corner bathroom, has two bunks in addition to a double bed.

UP-SIZED
The Karijini is the only Park model with a full-sized bathroom, which extends across the rear. This roomy bathroom has a full fibreglass shower cubicle, Thetford china bowl toilet, vanity basin with plenty of surrounding bench space and cupboards above and below. Space has even been found for a small Lemair washing machine. There is a hatch with exhaust fan above the toilet and shower.

The bathroom looks very functional and the rest of the interior of the Karijini is in the same vein - unfussy, with clean lines, careful attention to detail, and a lot of thought put into the layout design. For its size, the caravan feels very spacious. White walls and neutral colours for the laminate benchtops, curtains and bed cover contribute to the open, airy feel.

BEDDING DOWN
The north-south double bed at the front of the van takes up less room than you would expect since it can be pulled out at night to its full length, with a bolster cushion taking up the slack against the wall. The bed has posturepedic slats which can be adjusted at the lumbar position in the centre of the bed. There is ample room to walk around and a good-sized half-wardrobe, drawer and cupboard on each side, three overhead cupboards and standard underbed storage. A long mirror on the wall next to the door is a nice touch.

Storage space in the rest of the caravan is also very generous. There is a pull-out pantry in the narrow cupboard that forms an island between the entrance door and the dining area, and five cupboards, each with two shelves, above the lounge dinette.

The kitchen is well-appointed with a Spinflo four-burner cooktop and grill, a Sharp microwave, and a 128L three-way fridge, which has been raised off the floor a few inches. Two double powerpoints allow for the use of a kettle, toaster and two other gadgets at the same time, if needed. A fluorescent bulb beneath the overhead cupboards provides a well-lit workspace.

As you would expect in a van of this size, there is not a lot of bench space. But the laminated shelf on top of the fridge looks like a convenient area for putting items while preparing meals. The cooktop also has a cover to increase bench space when not cooking.
Again, there is plenty of storage space with three overhead cupboards in the kitchen, two pull-out drawers for pots and pans under the cooktop, and two cupboards and five drawers under the sink. The sink has a mains water tap and a pump tap connected to the water tanks. Both water supplies are filtered.

The lounge dinette comfortably seats four adults and there is space for more chairs if entertaining guests. The table folds down at one end for easy access.

Halogen spotlights provide lighting for reading at the lounge and in bed, and three double fluorescent bulbs in the roof mean the van will always be well lit. There is even LED mood lighting in the ceiling - a feature of the latest model Dometic air-conditioner.

ON THE OUTSIDE
There are two lights in the awning area, a 240V/12V powerpoint, and a TV antenna socket. Other features on the exterior include the mains water tap on the A-frame, convenient jack points just in front of the mud flaps, lockable water fillers, and easy access to the toilet cassette. The caravan also has LED traffic lights, a grab handle next to the Camec triple-lock security door, and the roof is slightly domed to assist rain water runoff.

The galvanised lockable storage boot at the front has plenty of space for an optional battery. Solar panels are also available as an extra, as is a flatscreen TV. You can also choose your own interior colour scheme from light, medium and dark wood, 40 laminate colours and 60 fabric options.

THE BOTTOM LINE
This is a well designed caravan with a light and airy interior and a very liveable feel. You could comfortably travel around Australia in this, mostly staying on the bitumen, or use it for shorter breaks. It is not too long and is light enough to be towed by a medium-sized 4WD or family sedan.

Those clever people at Western Caravans have found a way to make the interior of what is actually a smallish caravan seem a lot bigger than you would expect. 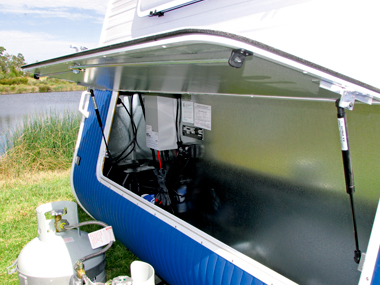 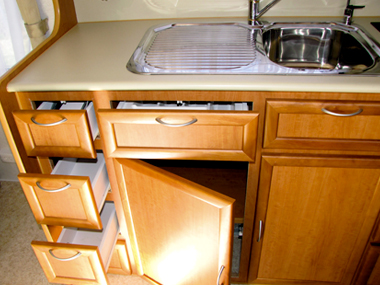 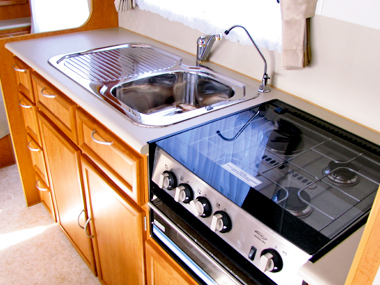