When fifth wheelers began to make their mark in the Australian RV market, various manufacturers and importers adopted different strategies. Some were built locally, some were fully imported (especially the large US variety) and some were a mixture of overseas and local assembly, especially of those items requiring compliance certification.

Venture Fifth Wheelers, based in Toowoomba, Qld, went for the latter strategy, which included making its rigs suitable for utes and the like. One of its latest models, the VSX 760, shows that experience gained has been put to good use. One of the most obvious external changes to its previous models is that the earlier, somewhat square look of the front has been reworked for a much more streamlined and visually pleasing appearance.

MADE FOR AUSSIE UTES
With an ATM of 2950kg and a Tare of 2400kg, the VSX 760 has plenty of load capacity. It is also a reasonable proposition for a number of tow vehicles. In our case, the Nissan Navara dual cab had a towing capacity of 3000kg (no GCM given), making it a suitable candidate for the job. Some care needs to be taken with the 810kg Navara load capacity, once the loaded pin weight (480kg at Tare) and any other load (including passengers) in the Navara are taken into consideration.

The 126kW 2.5L turbodiesel engine had no trouble coping with the load and hitching up was not a problem: the Navara came with a Venture-fitted Hijacker double-pivot hitch.

In terms of construction, the VSX 760 has a hot-dipped galvanised chassis that rides on tandem-axle Al-Ko IRS suspension. All wheels have electric brakes controlled by a standard Tekonsha unit fitted to the tow vehicle. Above the chassis, the aluminium frame is clad with moulded fibreglass or styrene sandwich panels integrating the insulation.

Although the door is a Camec security door, it’s wider than usual and you’ll quickly appreciate the difference. Windows are Seitz doubled-glazed acrylic hoppers with integrated blinds and flyscreens, which are on the ceiling hatches as well.

External bin storage is not always easy to provide in smaller fifth wheelers but, in addition to the gas bin containing two 9kg cylinders, the VXS 760 has a front tunnel boot that’s large enough to stash quite a few items.

The mid-nearside bin is for essential items like the 240V and 12V sockets, TV antenna connection and flatscreen TV mounting bracket. Alongside is the gas connection for a barbecue.

LIVING QUARTERS
Fifth wheeler layouts tend to follow a basic arrangement and the VSX 760 is no exception. Occupying the front overhang is the main bedroom area. Close by on the offside is the bathroom and adjoining wardrobe.

Fitting into the nearside is the kitchen bench with the rear area being devoted to lounging and dining.

Stepping away from North American design, the interior has a light timber stained hue with Euro-style, curved cabinetry. There are no curtains but the windows all have blinds fitted.

The ceiling height in the overhang bedroom of fifth wheelers is an interesting subject of debate, with views depending, in part, on whether you have a caravan or motorhome background. Not all fifth wheelers have a full-height bedroom ceiling, but most are high enough so that you only have to bend over to get into bed and not climb and crawl in like you sometimes do with Luton peaks in motorhomes. If you come from a motorhome (Luton peak bed) background, then the ceiling height looks good. If you come from a caravan background and are used to a full-height ceiling, it might seem low.

Measuring 1.04m (3ft 4in) I reckon the VSX 760 has good bedroom ceiling height and it’s possible to sit up in bed without difficulty. Getting in and out isn’t too awkward, either, and two large steps, complete with storage areas, are easily negotiated. Between the steps and the entry door, a cabinet with a glass door offers convenient storage for small items.

Behind the queen-size mattress is a bedhead with a couple of small cupboards and reading lights. Overhead lockers are fitted along both sides and all the necessary fittings for a flatscreen TV are installed in the offside corner near the foot of the bed. Ventilation is handled by windows on both sides and a large ceiling hatch.

Mostly white in colour, the bathroom has a separate shower cubicle, Thetford cassette toilet and washbasin. The latter is part of a moulding that includes a cupboard underneath and two cabinets above. Both have clear doors but the mirror and powerpoint are mounted on the wall. Ventilation and natural light are supplied by a roof hatch and window and towel rails are fitted to the door.

The kitchen area has three drawers, two cupboards, four overhead lockers and a couple of floor lockers, and the bench has extensions at both ends. A three-burner cooktop and stainless steel sink with drainer, both with glass lids, are also found. Fitted under the cooktop is a convection microwave. A conventional oven is an option. Not to be forgotten, the 184L three-way fridge is mounted opposite the kitchen bench between the wardrobe and dinette seat.

In the rear, two leather-upholstered lounges invite you to sit down and relax with your legs outstretched. Windows on three sides provide a good view of the surrounding countryside. A hinged table in this area can be used as a drinks and nibblies shelf, or as a full table. For storage, there are areas under the seats and all-round overhead lockers.

Substantial-looking speakers are mounted under the lockers in the rear corners.

The forward-offside locker door hides the mounting panel for the hot water controls, water tank gauges, battery monitor and AM/FM radio/CD player. Under that same locker is a mounting point for the flatscreen TV, which comes complete with DVD player.

In addition to the previously mentioned technology, the VSX 760 comes with 200Ah deep-cycle batteries that are charged by both a 25A smart charger and 260W solar panels. An inverter is available as an option.

THE BOTTOM LINE
There’s not much doubt that the new VSX 760 is several steps ahead of previous Venture models. It certainly looks the part and is appointed with plenty of interesting features.

The other asset, of course, is that it suits a good selection of tow vehicles.

Price as shown: $93,500 (drive-away, Qld); price includes all the necessary gear for the tow vehicle

Thanks to the Warrego Winery, corner Warrego Highway and Seminary Road, Marburg, Qld, for providing the location for the photography. For more information, visit www.warregowines.com.au 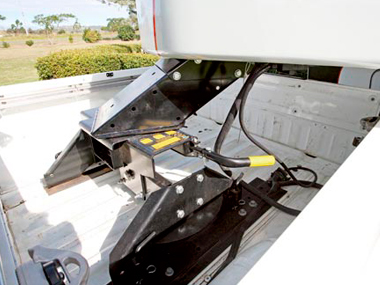 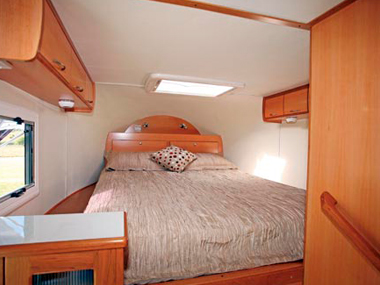 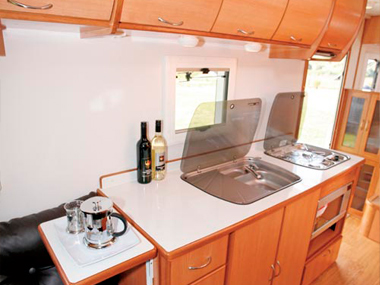 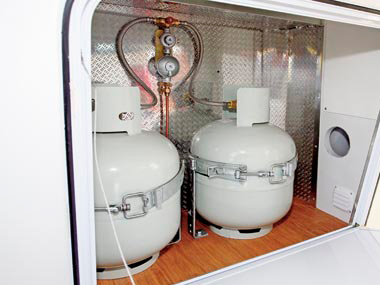 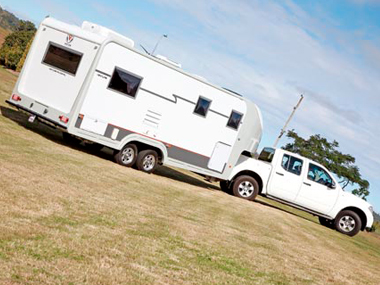 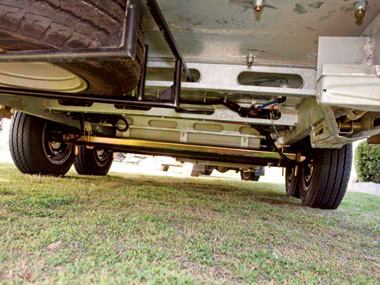 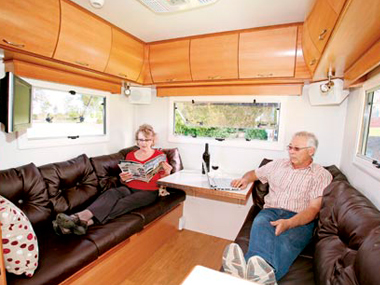 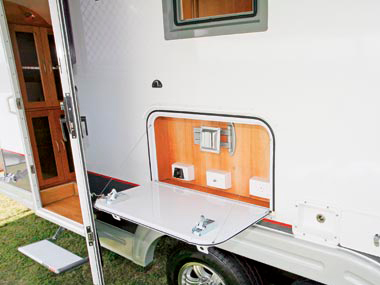