Roma has a surprisingly long history - one that dates back to 1928. In that time, it's stayed in the same family. Not many other manufacturers can claim that.

In south-east Qld, not so long ago, Woombye dealer Caravan World took on the Sovereign and Elegance ranges of Roma vans. We looked over the first of the new arrivals, a 7m (23ft - external body length) Elegance.

MODERN INTERIOR
Our Elegance came with a somewhat familiar layout, but with several features that make it stand out from the crowd. Reflecting contemporary layout design, the Elegance has a large rear bathroom and a front bedroom, with the dinette and kitchen filling the middle. A high gloss, black marble laminate and a "burnt orange" timber stain dominate the interior look.

Each of the Seitz hopper windows came with integrated blinds and insect screens; curtains were fitted, too. Additionally, both the front bedroom and bathroom windows have lace curtains.

Powerpoints and light switches were mounted seemingly everywhere and in logical places. As were all the light fittings - a mixture of halogen and fluorescent.

Undoubtedly the surprisingly large kitchen will be of interest to the caravan chefs among us. It has a long bench back from the door along the nearside and a second smaller bench on the opposite side between the 175L fridge and dinette seats. Above, the microwave is set at a lower height than the overhead lockers, making it readily accessible.

Making use of the corner against the rear bathroom and thereby saving a bit of space, the stainless steel sink avec drainer is set an angle. Tank and filtered drinking water are both on tap. Adjoining the sink is a Swift four-burner cooktop/grill/oven. It comes with a flush-fitting laminated top, thus adding to the already generous benchtop space.

In many vans that have a full-width rear bathroom, given the space constraints, the kitchen design is often a bit 'squeezed'. This is not the case with the Elegance: there's plenty of space for storing things on both sides, including five cupboards, six drawers of various sizes, four floor lockers and five overhead lockers.

The forward end of the kitchen also happens to be the entertainment centre with an AM/FM radio/CD player fitted into the overhead lockers, and on the wall underneath a TV antenna connection is positioned. It's quite a good location for a swivel arm-mounted flatscreen TV - it can be seen from both dinette and bedroom.

TIME TO DINE
In keeping with current design trends, the leather upholstered dinette has it all - tri-fold table, bookshelf and powerpoint under the table, padded wall cushions and underseat drawers on both sides. The only trend items 'missing' from the dinette are foot rests, which would cause a conflict with the drawers (but said drawers could open into the dinette). Above the dinette, the lockers have frosted glass doors.

To digress: it's not immediately obvious, but one of the photographic advantages of low and large windows, like those on both sides of the bedroom, is that interior shots can be taken from outside the van, thus giving the photographer a bit more latitude. On a more practical level ­- and what you, the reader, are probably more interested in - is that those same windows, not to mention the front window, give the bedroom a very spacious feel. In conjunction with a Four Seasons hatch, they also supply good ventilation.

Measuring 1.85x1.52m (6ft 1in x 5ft) the innerspring mattress sits on a metal-framed, posture-slat base that can easily be lifted to access the storage area underneath. With side mirrored-door wardrobes, bedside cabinets with small shelves and overhead lockers, the bedhead has a somewhat familiar look. Under the window is a relatively narrow back-of-bed shelf.

The bathroom, across the rear of the van, has the full kit with separate shower cubicle on the nearside and Dometic cassette toilet on the offside. Because neither of those items are quite in their respective corners, there is room for a Lemair top-loading washing machine behind the toilet and a linen cupboard in the space behind the shower cubicle. The apparently 'unusable' space below the linen cupboard makes an excellent external bin. Filling the mid rear wall is a substantial vanity cabinet with washbasin above and a two-door cupboard and four drawers below. The large wall mirror should suit most requirements.

A window is fitted above the toilet on the offside wall, but I have been reminded on hot days about the crossflow benefits that come with having a window in the rear wall - it then doesn't matter which way the van is facing. This design would, of course, create a problem with the wall mirror…

Constructed in a fairly traditional manner with timber frame and aluminium cladding, our Elegance had a 150x50mm-railed DuraGal chassis. Up front, the similarly dimensioned drawbar rails run back to the front suspension mounts. The suspension is a tandem axle, leaf spring, load sharing setup fitted with alloy wheels. Two 95L water tanks are fitted between the chassis rails - fitted to the offside rail on either side of the wheels are alloy boxes for the 100Ah batteries.

On the drawbar, behind the two 9kg gas cylinders, a mesh rack offers storage space for water hoses and the like. External storage space is certainly a feature of this van - in addition to the front boot which houses the battery charger and fuses, there is a front tunnel boot and a largish storage bin at the rear nearside.

THE BOTTOM LINE
With an ATM of 2900kg and a Tare of 2300kg, the Elegance isn't a particularly light caravan, but it does have a very good load-carrying capacity. More than that - it is fitted with enough mod cons and other goodies for pleasurable touring around much of Australia. 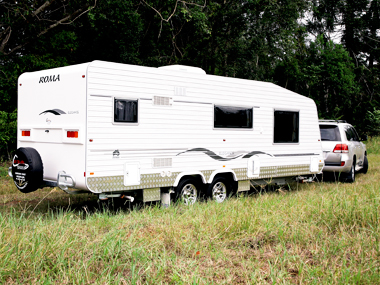