WITH SINGLE-CUBICLE shower/toilet vans becoming somewhat rare in new Australian vans, Gateway Caravans' Gary Merlo knew that if he wanted to bring out an upgraded van for his company's 25th anniversary, he would have to offer a full ensuite.

"The other [combo shower/toilet] vans are getting harder and harder to sell," he says.

Starting life as a Javelin SP, the upgraded Gateway 25th Anniversary LE, as it's officially known, is a 6.1m (20ft - internal length) Olympic with not only a rear ensuite, but also that other lately in-demand feature: a washing machine.


The plan was to offer a caravan with these extras without adding length, and Gary and the crew at Gateway and Olympic have done just that.

UNDERNEATH
The Olympic's timber frame sits on a 100x50mm (4in x 2in) SupaGal chassis. The unit rolls on dual axles with 15in alloy wheels and eight-ply light truck tyres as standard. Fitted in front of the axles are two 60L water tanks. The suspension is a Rocker-Roller leaf spring setup.

The A-frame, which goes all the way back to the first axle, sports an 8in jockey wheel and a handy tap for mains water. The front of the van also carries two 9kg gas cylinders and features mesh on the A-frame for added protection from the road.

While the Olympic doesn't offer too much in terms of outside comforts - there is no external barbecue, shower, etc., - it does have some features that are well appreciated.

A large roll-out awning with a centre support cradle is easily set-up and gives plenty of shade and space outside the van. The awning also comes with LED lighting, and a fold-out picnic table on the side of the van provides an easy serving space during happy hour.

While Gary made some points on the problems of having an external barbecue (slopping grease, unpleasant smell, etc.) and/or a fridge (some people prefer the space for storage), I would have liked something more by way of features on the outside of an upgraded "anniversary model" van. That said, it has all the essentials covered, including a fibreglass stone guard for the front window. The lockable front boot is easily large enough to hold the jockey wheel when travelling, plus a lot more, and the spare wheel is kept at the back of the van, attached to the large rear-bumper.

EASY LIVING
A definite highlight of this Olympic is its liveability. As well as the ensuite, the dinette/kitchen area is very well done.

On gaining access through the rear entry (which features a screened security door), the van's 175L Dometic fridge is directly in front of you. The location of the fridge is important, according to Gary. He said feedback from customers suggested having the fridge at the opposite end of the kitchen bench, near the bed, made the van's interior space seem a lot tighter.

A light, polished wood interior adds to the sense of space, and in this van worked well with the plush navy blue of the dinette. It should also be noted that there are several interior décor options, including leather seats.

There is a good amount of kitchen bench space, with inset covers for both the Swift four-burner cooktop (with grill and oven) and stainless steel sink. Despite the increased space these covers offer, one complaint was that the cooktop cover didn't sit completely flush with the rest of the benchtop, creating a slightly uneven space that didn't look quite as neat as it should. A smooth grey finish gives the kitchen a modern look.

The kitchen comes with plenty of storage above and below, with three overhead storage lockers and five drawers underneath the bench.

Having a café-style dinette in his vans is one of Gary's particular interests. Removing the need for a fixed table that often comes with an L-shaped lounge, the café-style fits a very handy tri-fold table that leaves more living space when folded away, while retaining the larger dining option. The separate seating, which easily seats four adults, is made more comfortable through the use of collapsible footrests at the end of each seat. Putting the feet up and watching the (optional) 19in flatscreen TV is a very comfortable exercise.

Each dinette seat comes with standard storage underneath, as well as some nifty extra drawers below the footrests. Another neat component is a set of powerpoints in a cabinet below the tri-fold table, which have been added primarily for laptop use. That gets a tick.

ENSUITE STYLE
One of the major features of this upgraded model is the rear ensuite. With a separate shower and toilet, vanity and Lemair washing machine, it has pretty much everything you would need.

The offside Thetford cassette toilet and nearside shower have more than enough room (and a vanity) between them, but I especially liked that the washing machine, which was completely unobtrusive under its benchtop cover (our photographer almost left without photos of it because he didn't know it was there!). With the cover down there is plenty of bench space next to the vanity and it is a plus that the washing machine doesn't protrude from its cabinet, so it doesn't get in the way when you're using the toilet.

In the bedroom, the innerspring mattress comes with cabinets on each side, as well as small wardrobes with mirrors. The bed comes in at a shade under a queen size, measuring 1.88x1.48m (6ft 2in x 4ft 10in), but is still comfortable for a couple. One thing to note is the large shelf running behind the bed, underneath the window. This could act as a handy extra space for books, etc., when the van is staying put for a while. There is the standard storage area under the lift-up mattress.

With windows all-round, the bedroom sees plenty of natural light, and that can be increased with the use of the Four Seasons hatch directly above the bed. A 12V light sits above the bed, and reading lights on each side cater for both sleepers.

THE BOTTOM LINE
While it won't blow your mind with special extras on the outside, this upgraded Olympic is a very comfortable van that provides loads of interior space, and the luxury of a separate shower and toilet, plus a washing machine. In making very efficient use of the available space, Gateway Caravans has done a great job of offering an ensuite van at a very good price.

For anyone who likes to have a few interior comforts on the road, this van would be a great choice. 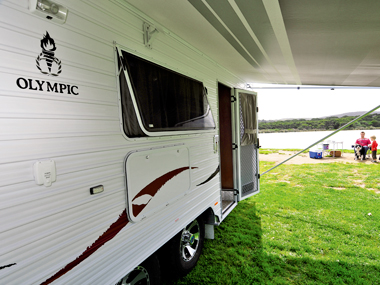