It’s very easy to be captivated by giant caravans with every conceivable bell and whistle. But fantasising aside, some owners neither need nor realistically want the so-called flagship model in a manufacturer’s range. In fact, sometimes the entry level offering can surprise with the simple good sense of it all.

Looking one-sidedly, bigger vans mean greater purchase and service bills, a larger and thirstier tow vehicle and reduced manoeuvrability or suitable parking space at caravan parks. Little wonder then that many still consider smaller vans the best way to go. In Nova Caravans’ new Revivor, which the manufacturer calls its 16ft 6in model (5m – internal length), we have a fine example that good things – with plenty of features – can come in small packages.

The biggest headline for this van is its ATM of just under 2t. That means towing is possible with Australia’s two most popular large cars: the Holden Commodore and Ford Falcon, as well as mid-size 4WD vehicles. This is a real boon for those who want to get into caravanning but don’t want the hassle or expense of also buying a large 4WD specifically for the job.

The Revivor’s weight is kept low, but the quality of its standard features is pleasingly high with an all-important shower and toilet room that rivals pricier vans. With a good-looking interior and an emphasis on build and quality of finish, it’s little wonder that the Revivor is already proving to be a best-seller for Nova.

GOOD IDEA
Our test van was from Nova’s Adelaide dealer, Maytow Caravans, where Ben May explained the concept behind the Revivor: “Rob [Robert Cataldo, managing director of Nova] and I worked really hard to come up with the ultimate van for the weight and at an affordable price. It was very hard to do and it took a long time, but with my design input and Rob’s know-how we have certainly succeeded.”

The team at Nova have been producing its own brand of caravans since only late 2005. But with decades of prior industry experience behind them, they’ve quickly become a presence in the market, with innovative design and value for money. Recognising the need for a small van like the Revivor in its range is a wise step and offers some pretty stiff competition to its rivals in the sub-$50,000 price range.

For the money, the Revivor features traditional aluminium cladding over a meranti frame, built atop a 6in SupaGal chassis. It is a single-axle unit rolling on 15in wheels and low profile tyres, while the suspension is a leaf spring offering. While it’s not something you’ll want to hit serious offroad tracks with, the van will be very comfortable when in its usual stomping ground of asphalt roads and easily-accessible caravan parks and sites.

EXTERNAL FEATURES
With Maytow’s vast caravan experience, our test van has had some well thought out options specified to make it more practical for holiday excursions. To keep costs down, the Revivor’s standard spec is decent if not extravagant, so there is opportunity to tailor the caravan to your individual needs.

Externally, Maytow went for a tap on the A-frame and a Winegard antenna. Preparing for some outdoor living, there’s a picnic table, external TV point and outside hot and cold shower. There’s also a couple of 9kg gas cylinders on the A-frame, while underneath are two 60L water tanks.

Included in the base price are the Dometic awning, heavy duty bumper bar, and a front boot that houses the electrics as well as ample space for cargo. “We can now also offer a variation on this Revivor design with a tunnel boot rather than a front boot for those who would prefer a larger, 150L fridge inside,” says Ben May.

MOVING IN
The Revivor’s exterior isn’t flashy but rather shows European influence in its subtlety. The same applies inside the van, where modern-looking and stylish finishes are on show throughout. The laminated cupboards are pleasingly light in colour, and with a mixture of halogen and fluoro down-lighting it is very bright and welcoming. The marble-effect finish for the tables, kitchen and bathroom also shows an eye for style.

Inside it does feel a bit small at times, but this has to be the case when a van of this size includes as much as the Revivor does. As standard it features a double bed, but Maytow has optioned in a queen-size bed. Although the larger bed will be appreciated when sleeping, it does take up some valuable space.

The L-shaped lounge and pivoting table are generous in size for two or even three travellers, and the lounge’s suede-style finish looks and feels superb. Whether it wears or shows stains more than an alternative cloth or leather finish is open to debate, but it suits this van very well. A well-placed powerpoint under the lounge is handy for using a laptop computer at the table. Of note, a cafe dinette arrangement is an option for the Revivor if preferred.

It’s all very nice having a huge double fridge/freezer and oven substantial enough to prepare a feast for 20, but how often are they really required by two people caravanning? The motif of modesty continues in the Revivor with its 104L Dometic fridge and a Swift 500 Series gas and electric cooktop with grill. Again, a larger fridge can be optioned if you feel you’ll need the extra space.

The van’s built-in microwave will no doubt prove handy for extra cooking needs, but it is mounted a bit high for the shorter among us. That said, the van does leave plenty of useful cupboard space down low and combined with the other cupboards and drawers throughout the main living area, I feel there is enough storage space for two people to comfortably enjoy an extended period away. Sensible use of space has clearly been a prerequisite in the design.

ROOM TO PAMPER
In a small van like this, having any sort of ensuite is a huge bonus – so if it feels a little cosy in the shower and toilet area, it’s to be expected. That said, it’s not cramped and having a fibreglass moulded shower in place is excellent for a van of this size and price.

The under-sink cupboard encroaches on the toilet a tad, but there are neat shelves on offer and ample storage. I would, however, like a slightly larger wall-mounted linen cupboard included, if having one wouldn’t add significantly to the overall weight of the van.

THE BOTTOM LINE
If it’s a small and easy-to-tow van you’re looking for, Nova’s Revivor ticks a lot of boxes. The time and effort in correctly developing the package is very evident as it’s well laid out, nicely finished without being unnecessarily opulent and successfully squeezes in the all-important ensuite.

At $48,594, Maytow’s price for the van we tested is certainly competitive, and it’s possible to get this price even lower if you forego some of the cost options seen here. For true comfortable caravanning, however, this setup certainly appeals. A good price, a sub-2t weight and very well specced: the Revivor shows that bigger isn’t always better. 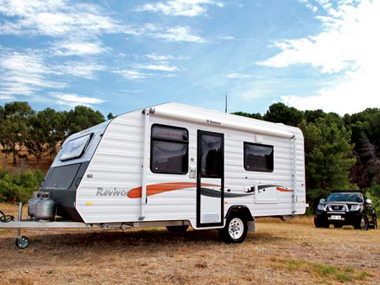 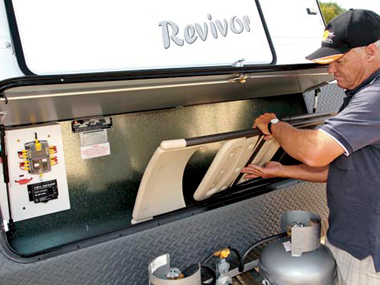 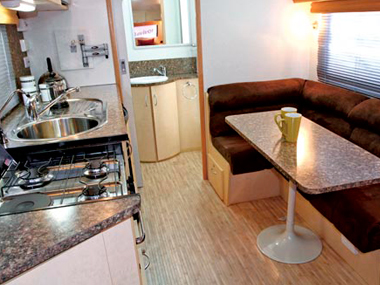 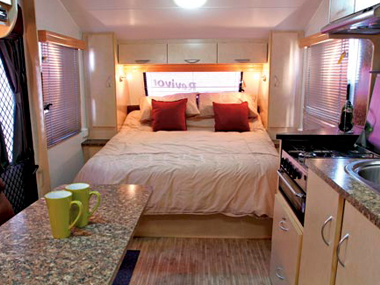 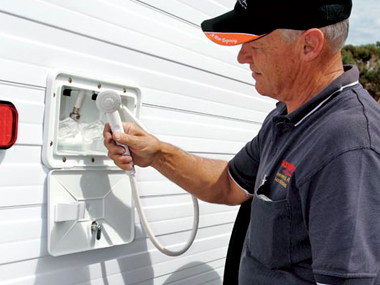