IT WOULDN'T BE unreasonable to suggest that many of the vans made in Melbourne, Australia's caravan manufacturing capital, often look pretty similar. So it's quite refreshing so see something a little different, like the New Age Little Joey 15 Series.

From the outside, the differences are not immediately apparent apart from the rear-wall entry, but on the inside things look quite distinctive. For a start, there's no 'timber finish' to be seen. Instead, in our van's case, white (walls and ceiling) and dark grey (cupboard and locker doors) were the interior colours. All the hopper windows had insect screens, but also came fitted with slimline venetian blinds. Plus, despite measuring just 5.26m (17ft 3in), this Little Joey has separate shower and toilet cubicles.

The van has a front island bed, mid-section offside kitchen, nearside dinette and a nearside shower cubicle with the toilet opposite. It might sound a bit cramped, but having the bathroom cubicles in the rear gives the rest a spacious feel.

THE INTERIOR
Starting in the bedroom, the innerspring mattress measures 1.93x1.4m (6ft 4in x 4ft 6in) and sits on a posture slatted base, which is easily lifted to access the conventional storage area underneath. The bedhead comes with side wardrobes, cabinets (sans drawers), overhead lockers and halogen reading lights. Windows all-round give plenty of natural light and ventilation. There are shelves instead of any foot-of-bed corner cabinets.

Given the size of the van and everything fitted inside, the kitchen was never going to be large (which may not please everybody), but it is still big enough to contain a Spinflo four-burner (three gas, one electric) cooktop/grill alongside a stainless steel sink. Fitted under the grill, and a little low to the floor, is a Sanyo microwave. Taking up most of the remaining space is a Dometic 90L fridge. General storage space consists of one cupboard, two drawers and a selection of overhead lockers, some with a second shelf. Mounted on the end of the overhead lockers, thus able to be seen from both the bed and the dinette, is a mounting bracket for the 19in flatscreen TV.

A double powerpoint and water tank gauges are fitted at the rear end of the kitchen bench, while the main 240V circuit breaker and hot water switch are in an overhead locker at the other end.

Built in a style usually seen in more expensive vans, the dinette has a multi-functional tri-fold table with a small cupboard underneath. Both seats have storage beneath with access via a locker door. A radio/CD player is fitted at the rear end of the overhead lockers. The reading lights are halogen, but there is no nearby powerpoint.

Having a rear-wall entry makes the separate shower and toilet possible. Ventilation in the toilet, which also includes a corner washbasin, is provided by an exhaust fan and small window. The shower cubicle has both a variable height faucet and extraction fan, but no window. The size of the van means the cubicles aren't luxurious in space, but they are still very usable.

ON THE OUTSIDE
The Little Joey is built conventionally, on a DuraGal chassis with timber frame and aluminium cladding. Polished alloy checkerplate is used for the side skirts and front stone guard. External storage is limited to the front boot, but it's relatively spacious with only the 100Ah battery and charger inside. Our review van came with an "Off Road Pack" that included torsion independent suspension, instead of leaf springs and alloy wheels.

Fitted to the front drawbar were a 9kg gas cylinder, jerry can holder and mesh rack between the rails. It's not in an obvious position, but the spare wheel is centrally mounted underneath the chassis, just in front of one of the two water tanks, both of which are protected by galvanised sheeting.

A common problem with rear-wall entry vans is where to put the awning, but New Age has solved this by having a conventional side awning and another above the rear door. Fitted to the nearside of the van are a picnic table, powerpoint, TV connection and 12V socket. Also fitted are a roof-mounted Aircommand air-conditioner and a Suburban 23L water heater.
As you might imagine, with a Tare of 1720kg and a load capacity of 300kg, the Little Joey is very easy to tow by a wide range of vehicles, and our 4WD had no troubles.

THE BOTTOM LINE
One of the attractive features about the Little Joey is its individuality. Not everyone is going to like the rear-wall entry, but it does allow for layout variations that would otherwise not be possible. And not everyone is going to like the internal décor, but I would look at it as a nice change from the industry standard. Overall, it's is a great little van that's very functional and doesn't require a large tow vehicle. 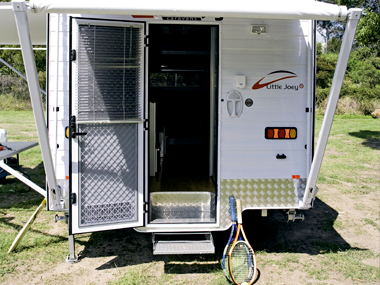