WHEN BRISBANE-BASED Lifestyle RVs recently decided to add Millard caravans to its range, the company wanted to take the renowned manufacturer in a different direction. Millard is best known for its on-road vans, but the team at Lifestyle decided to fit them with Cruisemaster independent suspension, among a number of other items, to create the Outback range.

For this review, Lifestyle gave us a 4.42m (14ft 6in) pop-top. As an 'offroad' van this length is a little unusual, but it's fully equipped for outback travel. Its shorter length and width of 2.2m (7ft 3in) are assets for narrow and undulating outback roads, and the fact it's a relatively small van means another attractive feature - an ATM of 1796kg, allowing for a wide range of tow vehicles.

"This is the best little offroad van available. We reckon we've found a market niche," Lifestyle RVs' Bill Creswick says.
My tow vehicle was a Kia Sorento Platinum powered by a 2.2L/145kW turbodiesel, which supplied a very generous 436Nm of torque (always a figure to pay attention to when towing, as is the maximum towing capacity - in this case 2000kg). The six-speed auto gearbox performed very smoothly and there were no dramas on my excursions along rough tracks and around the Brisbane suburbs.

THE BUSINESS END
Underpinning the Outback is a 150mm (6in) hot-dipped galvanised chassis and drawbar of the same dimensions running back to the suspension mounts. The Cruisemaster suspension setup is fully independent with trailing arms, coil springs and shock absorbers. Two 60L water tanks are mounted between the rails fore and aft of the wheels. Somewhat surprisingly, though, this van's drawbar has a standard ball coupling, rather than 'offroad' coupling.

The front of the van also features two 9kg gas cylinders and a centre-mounted jockey wheel. With no front boot, the alloy checkerplate toolbox is very handy, as is a front tunnel boot and small door at the nearside rear that gives external access to an inside cupboard. None are large enough for a spare wheel, but that is mounted on the rear bumper along with two jerry cans.

With the roof raised, the ceiling height is a very acceptable 2.08m (6ft 10in), and although the wall windows aren't particularly big, the gusset windows help with natural light and ventilation.

A double bed sits across the front of the van, which allows for an offside kitchen bench, nearside dinette and the shower cubicle in the rear offside corner. Fitting a shower/toilet cubicle into a van of this size requires some design gymnastics, but the result here is quite workable. Lighting throughout is a mixture of fluorescent and halogen.

COMPACT LIVING
Measuring 1.9x1.38m (6ft 3in x 4ft 6in), the innerspring mattress occupies the entire front end and, being an east-west arrangement, means the inside sleeper has to climb over to get out. Windows all-round give good ventilation and the bed lifts up for access to the storage area, part of which is occupied by the tunnel boot. There are also standard overhead lockers.

There's a surprising amount of benchtop space in this kitchen, but that has been achieved via a compromise - the cooktop and sink are a combo unit so there is no drainer or griller. A microwave sits at very a user-friendly height where a griller might otherwise be. Forward of the microwave is a 90L Dometic fridge, and behind are cupboards of various sizes and a small, wire-basket, slide-out pantry that's supplemented by a good-sized drawer under the microwave and overhead lockers. Powerpoints are fitted at either end of the benchtop.

Occupying most of the nearside between the entry door and the rear is the dinette, with two single seats and a table. It can also be made up into a bed measuring 1.5x0.85m (4ft 11in x 2ft 9in). Drawers are fitted underneath the seats and there are more overhead lockers.

Yet more storage is squeezed into the rear of the van, between the bathroom and nearside wall. This comprises a top-hatch storage compartment in the corner and a wardrobe in the middle.

The Outback's shower/toilet cubicle has solid walls and a curtain for the 'pop-top' area. Inside are a flex-hose shower, Dometic cassette toilet and small corner washbasin. A fan is mounted in the ceiling.

THE BOTTOM LINE
The Millard Outback is a good example of a compromise van. This might sound like a negative comment, but it's not meant to be.

What's been achieved here is a relatively small van (and all the advantages that brings) designed for rough-road use, yet with an interior that has all the essentials.

The interior is where compromises are made, which is something the customer has to take into consideration. But the result is a livable van that can be taken places bitumen tourers can't. 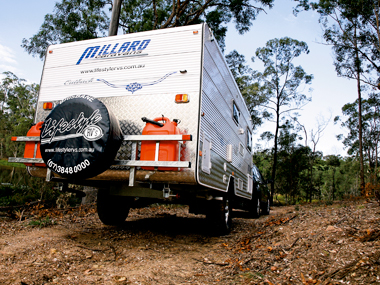