It’s not easy to make a caravan look a little different and stand out from the crowd, but Lotus has achieved that in some ways with its Trackvan Extreme. The black-anodised checkerplate around the lower sides, for instance, distinguishes it from the usual white van bodies, but there’s more.

After spying the Trackvan at the Brisbane caravan show, we thought it worth a visit to the premises of Caravan World (the dealer) at Nambour, Qld, for a closer look. Since Brad Pendleton took the helm of this dealership a few years ago, there’s no doubt that things are on the up and up. The Trackvan is probably a good match for the Caravan World team: it’s excellent for exploring some of those exotic outback Qld locations.

SENSE OF PURPOSE
The Trackvan Extreme has a certain purposeful air about it. That’s partly caused by the aforementioned black checkerplate (not everyone will like it but it does stand out), partly by the raked appearance of the front of the van and partly by the large, bubble-style, hopper windows. 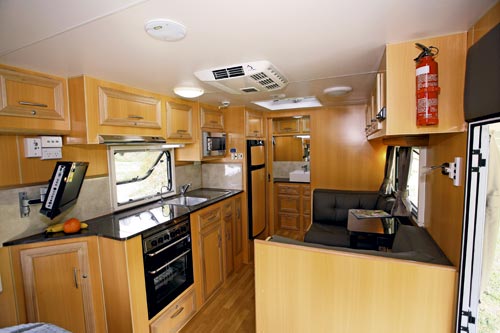 Unpinning the Trackvan Extreme is a hot dipped galvanised chassis. It’s built as a double rail arrangement, the lower one incorporating the drawbar being 150x50mm (6x2in) and the upper being 100x50mm (4x2in). For those rough roads, Simplicity load sharing suspension is fitted, as are 12in brakes for the alloy wheels.

Two 95L, gal sheet-protected water tanks are fitted fore and aft of the wheelbase. Still underneath the van, two battery boxes with 100Ah batteries in each are fitted to the front offside chassis rail– out of the way but still reasonably well protected.

Tubular brush bars (also black) are fitted along both sides of the van. Further protection is offered by the stoneguard on the drawbar and the front-fitted, heavy-duty mud flaps, while ground clearance really isn’t going to be too much of a problem.

The aluminum-clad body is insulated and has a timber frame. A little differently from most RV manufacturers, Roxite polyplastic windows are used. They are double glazed, tinted and in most cases quite large.

There is no front boot on the Extreme; instead, a front tunnel boot and a separate toolbox (black checkerplate of course) are fitted to the drawbar.

INVITING INTERIOR
Inside the Trackvan, several features stand out. Up front the quite large windows give a very spacious effect in the bedroom; to the right of the doorway the leather-upholstered dinette looks quite inviting; and the kitchen looks worth investigating. Out of sight but not out of mind, is the bathroom in the rear.

The ‘timber look’ dominates in this van but the hue of the stain chosen is not overpowering and, in fact, quite pleasant. A mixture of halogen and fluorescent light fittings are used and there’s no shortage of those.

COMPLETE BATHROOM
In keeping with current trends, the bathroom takes up a fair bit of space and has the full monty in terms of its fit-out. That includes a shower cubicle in the nearside rear corner, Dometic cassette toilet opposite and a vanity cabinet taking up the rest of the wall area and upon which sits a large, square washbasin. Hiding under the benchtop in the offside corner is a Lemair top loading washing machine.

That still leaves enough room for five drawers and a soap container in the under-bench area plus a selection of overhead lockers. In between is a large wall mirror lit by an under-locker fluorescent light. Both toilet and shower have fan-assisted vents and there is also a small window above the loo. All can be closed off from the rest of the van by a sliding door.

KITCHEN
A large bathroom usually results in the kitchen area in particular being ‘squeezed’ a bit, particularly the benchtop. That’s true in this case but there is still room for a Swift four-burner cooktop, grill and oven, stainless steel sink with drainer and a large Dometic fridge. The cooktop does have a flush-fitting top, which creates a bit of food-preparation area.

The microwave oven has been set lower than the overhead lockers, thus making it user-friendly. General storage consists of two cupboards, two floor lockers, one cutlery drawer and an assortment of overhead lockers.

The technology controls are fitted at either end of the bench. To the right, the fridge wall has the hot water switch, water tank gauge and light switches. In close proximity are a powerpoint and Winegard TV antenna in the ceiling. At the other end of the bench, behind the swivel arm-mounted flatscreen TV, are a powerpoint and antenna/12V/DVD connections. Above that, in the overhead locker, are the 240V ACB and solar panel regulator for the two 80W solar panels– another indication that this van is totally self-contained.

LOUNGING AND SLEEPING
The dinette ticks just about all the boxes with its trifold table, under-table cupboard, halogen reading lights and overhead lockers. The front under-seat area is drawer-fitted while the back seat has a locker door for access. There isn’t a powerpoint, and if I was keen to put my feet up, I might be looking for hinged footrests, given the wall seatbacks.

Above the front seat in the overhead lockers is the AM/FM radio/CD/DVD player. It’s quite easy to get at and includes a 3.5mm socket for something like an iPod, but the only place to sit the MP3 player is in the adjoining locker unless you have a long cable.

The large windows on either side of the bedroom mentioned earlier give excellent cross-flow ventilation– there’s probably no need for a roof hatch, although you might like one if you have security concerns. There is always the roof-mounted air-conditioner in that case.

Surrounding the 1.85x1.55m (6ft x 5ft 1in) innerspring mattress bed is the usual bedhead of side wardrobes, bedside cabinets and overhead lockers. The posture-slatted bed base can be lifted to get to the under-bed storage area, which is only half the size it might normally be because of the tunnel boot– just a bit of space trading, really.

Something a little different are the taller than usual window pelmets that are actually small overhead lockers– not particularly large, but handy for smaller items that can get lost in larger cupboards.

THE BOTTOM LINE
On the road this 7.9m (26ft) van tracked along very nicely behind our LandCruiser. It really wasn’t working too hard which made it a good combination, and the weight-distribution hitch kept things on the level, minimising any rock ’n’ roll.

This Lotus Trackvan Extreme is built to handle some of the rough stuff of Australia, yet it offers that happy combination of a van that is neither too long nor overly heavy (for what it is), while still offering most of the comforts and essentials that outback explorers desire.