KINGDOM CARAVANS IS a relatively new player on the Australian RV scene, but in a short space of time its products have impressed many, including Sydney dealer Fulcher's Caravans.

According to dealer principal Alan Fulcher, Kingdom Caravans was just what he was waiting for.

"For a little while, and certainly since we moved to Camden, we'd been looking for something to complement our existing van range, and Kingdom Caravans seemed to fit in nicely for us," he said.

In case you've not been to Fulcher's Caravans, the new premises it recently moved into is mostly undercover - something a little unusual in the caravan scene and certainly an asset in very warm or wet weather.

When we review caravans manufacturers tend to offer up their latest and greatest (think full-width bathrooms), but given that most ranges have something to suit most budgets, CW doesn't necessarily always want to inspect offerings from the top end of town. So when Alan almost apologetically pointed me towards a Kingdom Memento, sans bathroom, I accepted his offer with enthusiasm!

NEAT AND TIDY
Hailing from Melbourne, the Kingdom Memento is built upon a box section DuraGal chassis that rides on tandem-axle, load-sharing, leaf-spring suspension. An on-the-knees look under the van reveals all the piping and cabling to be strapped up out of the way, with the galvanized-sheet-protected 80L water tank mounted in front of the axles. Al-Ko drop-down corner jacks are fitted all round.

Two 9kg gas cylinders are mounted on the drawbar, as is a mains tap and all the towing essentials - ball coupling, handbrake and centre-mounted jockey wheel. Behind the gas cylinders is one of those handy little mesh racks - good for hoses or firewood. Naturally there's a front boot, this one just containing the caravan battery and charger. The boot also has a centre-mounted light, which is handy for after-dark access.

The body structure is fairly standard - timber frame, insulation and aluminium cladding. Aussie Traveller supplied the security door and the windows are all tinted hoppers - the one beside the door being slightly restricted when the door is open. Alfresco living items are quite simple - a Sunburst Eclipse awning, mid-wall powerpoint and two external lights. Like many a caravan, all the running lights are LEDs.

Not having a bathroom can be an advantage. You either end up with a smaller van (which might be of benefit when towing) or one that has a bit more internal living space. Being nearly 5.8m (19ft - internal) long, this Memento ended up with the latter. Inside, it features a front bedroom, nearside kitchen and a lounge/dining area that fills an equal amount of the both the rear and offside walls.

The light-hued timber look employed for both the cabinetry and the walls is quite prominent, although it is offset by the much lighter ceiling. Both full and net curtains cover the windows and the window tinting is very effective. Ventilation is supplied by a forward Four Seasons hatch, a rear marine-style hatch and a roof-mounted Ibis air-conditioner.

PUT YOUR FEET UP
One of the top features of the Memento is certainly the rear corner lounge. With both seats being 1.7m (5ft 7in) long, there is enough space for four people, but - even better - there's room for two to put their feet up. But the lounge setup makes watching the TV a little difficult. The TV is mounted on the end of the overhead lockers facing the bed - it can be swung around, but those with eyesight problems might prefer an alternative location.

A pole-mounted table sits along the offside seat and can be lifted out of the way if necessary, but I wonder if a free-standing, fold-up table would work better in this arrangement. There's plenty of storage around the lounge area with an end cabinet, overhead lockers and underseat areas but, apart from a single floor-locker door, the latter is a bit awkward to access. Powerpoints are also located at each end of the lounge - the offside one is hidden between the adjacent cupboard and the overhead lockers.

Designed with a built-in angle, the kitchen bench is a little shorter than you might expect in a van like this, but it does of course have a four-burner cooktop/grill and a stainless steel sink with drainer. The cooktop is fitted in the angled section and includes a benchtop flush-fitting lid. Above are two lockers plus the microwave and below are three drawers and four cupboards, one with a wire basket.

Additional cupboard space is provided opposite and it's at the same height as the adjoining Thetford fridge, thus providing either good food or general storage space. Having a floor locker under the fridge does mean it's set up off the floor, which we like. Above the fridge, in a locker, you'll find the 12V master switch, the water tank gauge and the AM/FM radio/CD player.

Across the front of the van the bedhead has shelf space, side wardrobes, bedside cabinets and three overhead lockers. Halogen reading lights are fitted, as are single powerpoints on both sides. The bed itself has a 1.85x1.55m (6ft 2in x 5ft 1in) innerspring mattress that sits on a metal-framed, posture-slat bed base. Lifting the bed base reveals the usual storage space, which is divided into compartments. Half-height diagonal cupboards are fitted in both corners off the foot of the bed, as is the aforementioned TV on the offside.

In the towing department, this Memento weighs in with an ATM of 2240kg, putting it just under the Ford Falcon's towing limit. That's good news for sedan owners, but I'd suggest they load their rig very carefully. Certainly in this road test the van towed without any dramas, following our tow vehicle in a well-behaved fashion.

THE BOTTOM LINE
It was thoroughly refreshing to review a van without a bathroom. Such a caravan might sound like something of a backward step, but I'm well aware there are plenty of travellers who are happy to stay in caravan parks who simply don't need on-board bathroom facilities.

If that's you, inspect this Kingdom Memento -  it has all the other bases covered, and at an affordable price, too. 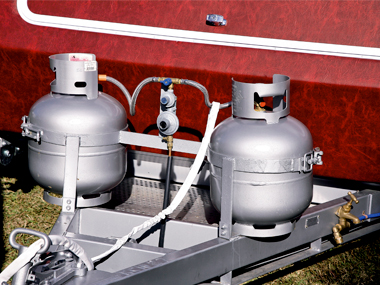 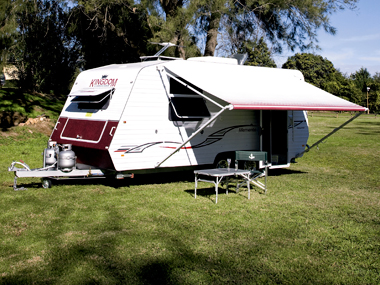 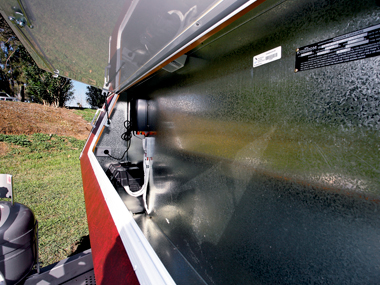 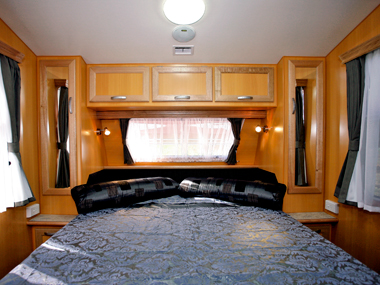