THE GENERAL TREND over the last decade has been for longer and heavier vans, but quite a few manufacturers do have a range of smaller vans available.

Jayco recently re-introduced its Starcraft pop-top range. Apart from being relatively small, the other characteristic is that the vans have their door at the rear, which has several advantages for the interior designer.

Jayco Sydney's David Carrick has several of the Starcrafts in stock and lent us the double-bed model for a look-over. "It's Jayco's budget model," he told us, "but it is also a very light van making it suitable for a good range of sedan vehicles." He added that its external length of 3.83m (12ft 6in) means it is also a very easy van to store and park.

We'd have to agree with that. Our tow vehicle, a Jeep Cherokee, was overkill in the towing department and proved the point that a larger tow vehicle is not needed. With a Tare of 922kg, a load capacity of 300kg and a ball weight of just under 100kg, our Starcraft wasn't much heavier than some camper trailers we have seen (with the advantage of course that the pop-top van has considerably less canvas to flap around). We should also mention that the pop-top has a very low towing height of just 2.1m (6ft 11in).

CONSTRUCTION
Built very much in the Jayco tradition, the Starcraft has a hot-dipped galvanised chassis that rides on leaf spring suspension and alloy wheels. Above, an aluminium frame supports the alloy-clad walls that come with tinted hopper windows and a triple-locker security door. Slightly differently from the walls, the pop-top roof is a fiberglass composite structure that gives both light weight and mechanical strength.

Given that the Starcraft design has a rear-door entry, there is no bumper bar and the spare wheel is mounted on the drawbar. There is also no conventional front boot; instead, there's front tunnel storage. It's not particularly large (in keeping with the rest of the van) but will certainly take essential items like folding chairs and a camping table.

SETTING UP
Setting up the Starcraft does not take long at all: it's a matter of unclipping the four pop-top clips and stepping inside to raise the roof, using the lifting frames at either end. That gives a respectable internal height of 2.02m (6ft 7in).

There is a point I should mention here: the lifting frames have a little plastic clip that has to be rotated to lock the roof in position. If you happen to forget, the roof will usually stay in the raised position until you put the awning out. In which case you might get a little surprise...

Speaking of the awning, it's conventionally side-mounted but of course does not cover the rear entry door. There's not much doubt in my mind that with a van of this size, outdoor living is going to be on the agenda and some sort of awning over the rear door would be a desirable option.

LAYOUT
Inside the Starcraft, the layout is uncomplicated with the double bed taking up most of the front half, a kitchen bench on the rear offside and a small dinette filling the nearside corner. It might sound cramped but it's not really - large front side windows and screened openings on all four gusset walls aid light and ventilation very well.

Is the kitchen compact? You bet! That would be essential but it certainly has all the necessary items. Fitted in are a Smev four-burner cooktop/grill with Sanyo microwave underneath. Alongside is a stainless steel sink with drainer, and underneath that, in the corner, is a 90L three-way fridge. In addition to the single overhead locker, there are two drawers, two floor lockers and a soap container under the sink bowl.

There's a TV antenna connection in the corner next to the powerpoint, which looks a little oddly placed until I figured out it's as good as anywhere with this layout.

Opposite the kitchen bench, the dinette is definitely for two people and has both contoured squabs and seat backs - a definite improvement on earlier flat cushions. Both seats offer the usual under-seat storage areas with floor locker and ply hatch access.

Up the front, the 1.83x1.32m (6ft x 4ft 4in) foam mattress bed has a metal-framed, contoured body slat bed base. It lifts to get to the storage compartment underneath - reduced slightly because of the front tunnel boot and the battery compartment.

Despite the van's size, it has a conventional bedhead complete with overhead lockers, side wardrobes and bedside cabinets. Both the latter have drawers behind the cupboard doors.

Electrics are straightforward. The lighting is a mixture of halogen and incandescent. In addition to the kitchen powerpoint, there is another beside the bed and an external one at the rear nearside. One near the dinette would certainly be useful.

THE BOTTOM LINE
This Starcraft might be described as a "back to basics" van. Many vans in today's market have everything possible on board, which can increase both weight and length considerably. The little Starcraft certainly does not have everything that opens and shuts but it does have all the essentials for comfortable caravan travel, combined with a low weight which means a wide range of tow vehicles and economical travel.

That can't be too bad in today's carbon-conscious world. 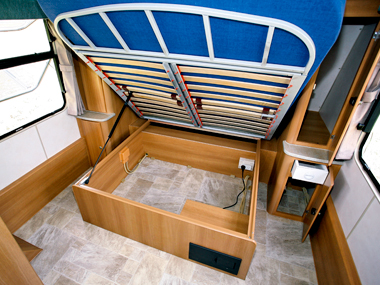