IT'S INTERESTING THE names that are given to caravans. Take the subject of this review, the Imperial Terminator. It sounds like something out of a Star Wars movie.

However, instead of being used to travel with a wookie at the controls through hyperspace to defend the galaxy, the Imperial Terminator can be used to transgress some of the rough roads in Australia with you at the controls.

Back on earth, the 18ft (5.5m) Terminator is built by Melbourne-based Imperial Caravans. It's much like other Imperial-built caravans at the Sydney Caravans sales yard but, as Paul Hutchinson says, "It has a few extra modifications that make it more suitable for offroad use."

What makes this van different from most offroad vans I cast my eyes over these days, is that it doesn't have an on-board bathroom, thus keeping both the price and weight down. Civilisation as we know it is not lost though, as it has an external shower and room for portable toilet storage. It also has a pop-top roof, which minimises travelling height, and will help you avoid low hanging tree branches.

LOOK THE PART
Quite a few of the van's aspects are more conventional though, like the hot dipped galavanised chassis, built with 6in x 2in (150mm x 50mm) rails. It's not a flat chassis, but one which rises at the rear to give a good departure angle - necessary when escaping enemy starships. Like many vans built for some rough road use, this one comes with independent suspension fitted with coil springs, shock absorbers and trailing arms. Quick-drop stabilisers are located at each corner of the chassis.

Up front, the drawbar is fitted with a Treg hitch. While the polyblock coupling works very well, it's only disadvantage comes at hitching-up time, as the tow vehicle and van have to be carefully lined up, both horizontally and vertically, to secure the connection.

Also fitted to the drawbar are two 9kg gas cylinders and a centre-mounted jockey wheel. The metal frame for the former was a tad close to the winding arc of the latter, resulting in scraped knuckles, but I'm sure that will be fixed in future models. Underneath the gas cylinders, between the drawbar rails, is a handy mesh hose and firewood carrier.

A look inside the front boot reveals a good amount of storage space, the battery and a three-stage charger. Fitted to the end wall is handy boot light.

Around at the rear, the bumper bar has a very businesslike look about it. Not only is it fitted with the spare wheel but it also has two jerry can holders. This adds nearly 600mm to the van's length, and given the chamfered design of the rear end, the spare wheel sits higher than it usually does. Large LED tail lights are well protected under a slight overhang of the caravan's body.

Body wise, the Terminator is conventionally constructed with a timber frame and white aluminium cladding. The lower waist of the van is covered by aluminium checkerplate. Tinted bubble-style hopper windows are used all round and the door is a Camec triple locker.

Setting up the Terminator is a matter of unclipping the pop-top roof, remembering to set the awning to "open", and lifting the roof from the inside. Given the height of the van, shorter people might find a small step useful for reaching the roof clips.
The ceiling height with the roof raised is a credible 6ft 9in (2m) and even with it lowered, it is still 5ft 9in (1.7m), so it's still usable for a quick roadside stopover.

OPEN PLAN
Because of its pop-top roof and the omission of a bathroom, the Terminator has a very open feel on the inside. An island bed is located in the rear, the galley is split across the middle and an L-shaped lounge sits across the front and offside walls - a very straightforward layout.

All the lower windows have a full set of curtains and the upper gusset ones have a zipped flap. The van's solid walls are predominantly timber, but that's offset nicely by the lighter colours of the gusset walls and ceiling.

One of the benefits of the L-shaped lounge is that it gives a bit of space for two people to put their legs up for a rest. There are handy small cabinets at both ends of the lounge for cups and glasses if the table is not being used. Alongside the offside cabinet is the 110L compressor fridge and above that is shelf space, which could easily be used for a TV, given that the powerpoint and antenna connection are close by.

Above the lounge on both walls are overhead lockers. Because they're fitted in a pop-top, they're at eye height for most people and smaller than those in a full van. To make the most of available space, Imperial has built in an L-shaped kitchen, which matches the lounge shape.

The galley comes complete with a Swift four-burner cooktop and grill alongside a stainless steel sink avec drainer with Samsung microwave above - set nicely at eye height, we note. The sink is on an angle and the benchtop area is minimal; however, the cooktop does have a flush fitting lid. General storage isn't too bad, with four drawers of varying sizes, three cupboards and an overhead locker.

Towards the rear, the island bed measures 6ft 3in x 4ft 6in (1.9m x 1.4m) and has an innerspring mattress. It's surrounded by the usual bedhead of side wardrobes, bedside cabinet and overhead lockers. There are small diagonal cupboards in each corner at the foot of the bed. You have to step over part of the wheel arch to get to the side of the bed.

Electrically speaking, this van is quite self-sufficient. Most of the lighting is either energy efficient halogens or fluorescents, and in addition to the mains charger, the battery is charged by two 80W panels.

THE BOTTOM LINE
One of the interesting features about this Imperial Terminator starship is that at 18ft (5.5m) in length, it's a relatively short van compared to many on the market these days, and with a single axle, it's going to have a good degree of manoeuvrability. With an ATM of just over 2000kg, it's also going to suit a wide range of motherships... or tow vehicles, making it suitable for exploring many a galaxy. 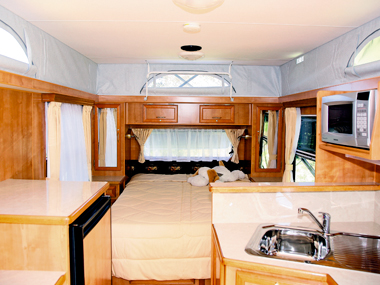 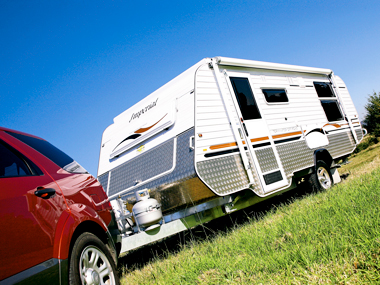 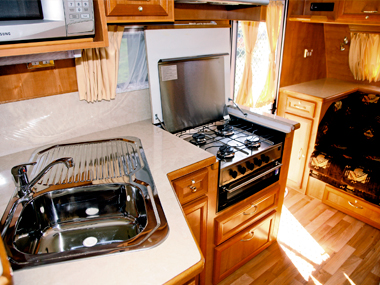 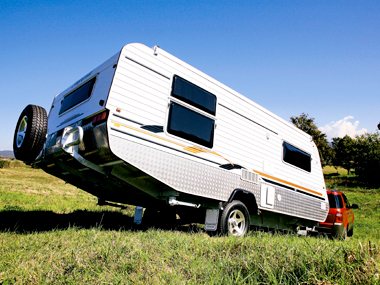 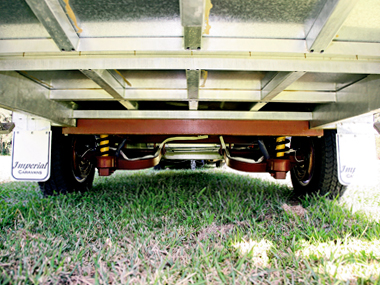 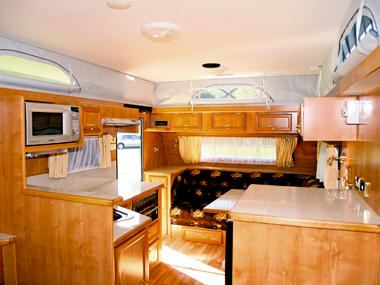