There's a considerable number of variants of what might be described as the ‘original’ caravan, i.e., those with hard walls and a solid roof. These days, there are pop-tops, camper trailers, caravans with slide-out walls and a variety with fold-out ends.

To the newcomer, this might seem a bit confusing, but it means that there is something for everyone. One of the champions of the something-for-everyone notion is well-known caravanning identity Gary Kratzmann.

Never one to stand still for long, Gary introduced the Sonic model in his Franklin range. The Sonic has both a pop-top roof and fold-out ends, meaning the van expands both upwards and outwards. For travellers with lighter tow vehicles, this setup is particularly advantageous.

Additionally, the Sonic is available with the optional Cross Trail pack, and it’s in this form that we put the Sonic 15ft 6in through its paces. While no-one is suggesting that the Cross Trail pack makes the Sonic an offroad caravan, it does allow the opportunity for off-the-bitumen travel into national parks and the like.

SETTING IT UP
Each van in the Sonic range is built on a SupaGal chassis with 6in rails. The larger vans come with 15in alloy wheels, and in the case of the Cross Trail Pack, with all-terrain 4WD wheels and tyres, along with shock absorbers for the leaf spring suspension.
Fitted just in front of the axle, the galvanised-sheet-protected water tank has a capacity of 80L.

The frame is built from meranti timber covered by aluminium cladding for the most part, but the front and rear fold-outs are moulded fiberglass. Given the design, there are front and rear tunnel storage bins in lieu of a front boot (the rear tunnel boot can be accessed from the inside).

Our Sonic had a Tare of 1610kg and an ATM of 1905kg, giving a load capacity of nearly 300kg. Its external length of 5.02m (16ft 6in) makes the Sonic a respectable towing proposition for a number of vehicles.

Once parked, setting up the Sonic is a matter of opening the fold-outs, which hinge upwards, and then lowering the bed bases into position. At the rear, the spare wheel bracket has to be released and lowered. Both bed ends are surrounded by screened walls.

There is also, of course, the pop-top to be unclipped and raised into position. Don’t forget to open the awning so that the roof rises easily. Once all that is done, it’s just a matter of arranging the bed mattresses.

In both bed-ends, roof tensioning poles have to be placed in position. The internal mounting points are in the small overhead lockers (yes, there are some) across the front and rear of the Sonic. Although it all looks slightly complicated, it isn’t. In fact, it works quite well.

THE LAYOUT
With the beds at both ends, the layout of the Sonic is simple but effective. The kitchen in particular adheres to what seems to be one of the ‘laws’ of RV design: that the size of the kitchen shall be the inverse of the overall size of the RV – i.e, big RVs often have small kitchens and small RVs have large kitchens. The Sonic’s kitchen is split across two sides of the van, with the nearside bench containing the four-burner cooktop/grill, a stainless steel sink and drainer. It’s also fitted with cupboards and drawers, including a wider-than-usual, slide-out, wire-basket pantry.

The opposite bench is not only aesthetically pleasing but quite practical. Underneath the benchtop is the Dometic 121L fridge. Beside the fridge, the bench is recessed lower, an arrangement that looks good and works well. In the space above the benchtop are the eye-level microwave and the split system Aircommand Heron air-conditioning.

The dinette is between the kitchen bench and the front bed. It will seat four people and can be folded down for a bed. In addition to the under-seat storage areas are the overhead lockers (smaller and set lower than in a conventional van). Halogen reading lights are fitted above each seat.

Both the front and rear beds have high density foam mattresses measuring 1.83x1.5m (6ft x 4ft 11in). Fly-screened walls are fitted all round and, usefully, the flyscreens attach by Velcro for easy removal and cleaning. Both beds have one reading light in the offside corner.

Some might perceive general storage to be an issue in a van of this size, but it’s not in the Sonic. In addition to the (almost) all-round overhead lockers there is a full and half-height cupboard in the front nearside corner and a full-height wardrobe in the rear offside corner.

In addition to the AM/FM radio/CD player, there is also a flatscreen TV that is mounted on the cupboard by the door and can easily be seen from the dinette.

THE BOTTOM LINE
So how does the Sonic shape up? If you want a family van that offers some internal living space while being a reasonable towing proposition, then I’d have to say it shapes up very well.

With the beds at both ends, the Sonic offers some ‘separation’ for parents and children, and the optional Cross Trail pack will extend your range of travel. 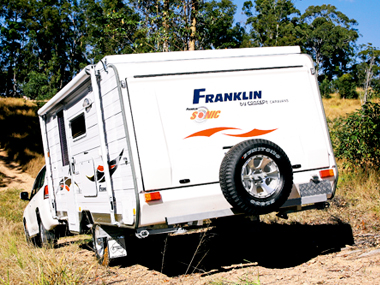 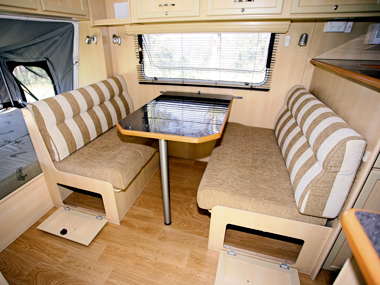 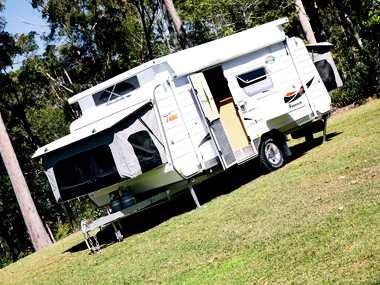 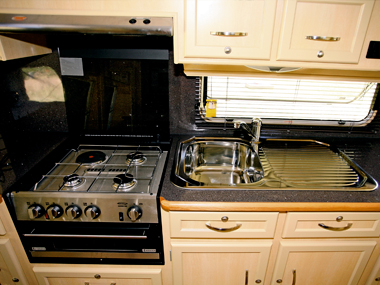 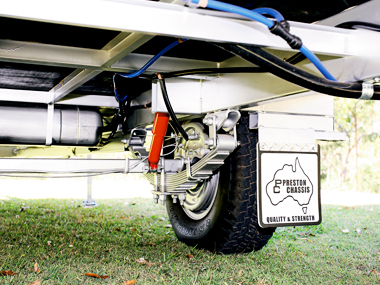