Generally speaking, any mention of US-sourced RVs includes the words “large”, or even “very large”, at least for most of them seen in Australia. So it was with some surprise at the Qld caravan show earlier this year that I saw a distinctly US-looking caravan of a very diminutive size.

Called a Wolf Pup and built by Forest River, the van certainly demanded further investigation. I learned that it and a number of similar designs were being imported into Australia by a company called EnergyTech, under the direction of Paul Davy. Once I could get my head around the size of the Wolf Pup, as well as what was inside, a longer review was definitely on the table.

Forest River is a well-known US manufacturer of caravans, fifth wheelers and motorhomes. Like a few other US manufactures, the onset of the Global Financial Crisis has seen the company take more of an interest in overseas markets and the relevant compliance items (like entry doors on the correct side).

This is usually my first question with imports not seen before, and Paul Davy told me that he had jumped over and through a range of hurdles and hoops to achieve the necessary compliance, particularly with the gas and electrical systems.

TOWING AND STRUCTURE
What makes the Wolf Pup distinctive, apart from its size and rounded front shape, is that because of its external body width of 2.03m (6ft 8in), it has box trailer-style mudguards. The towing weight is also of interest. With an ATM of 1572kg, it’s ideal for vehicles like the Ford Mondeo – an interesting alliance of American and European for a towing combination.

A short word on the Mondeo. While the 2L 120kW turbodiesel engine with a tow rating of 1600kg which I used is okay, the 2.3L 118kW petrol model, with a paltry 1200kg rating, is not. It’s an important distinction (if you are pondering ownership) that might have something to do with the maximum torque figures of 208Nm for the petrol engine and a much livelier 340Nm for the diesel. I understand that it has much to do with the price of diesel (a mystery in itself), but why diesels are not more popular in such a long distance-travelled country has long puzzled this writer.

Structurally, the Wolf Pup is a very familiar arrangement – powder-coated steel chassis, timber frame and aluminium cladding. The windows are sliding glass and the door has a separate (non-security) insect screen. At the rear, our Wolf Pup came fitted with an optional fold-out bed end. The US term for this is “spare room”, but I suspect for parents with children, it might well be “main room”. Given this Wolf Pup layout can easily be used by a small family, I’d reckon the fold-out end to be a definite option, especially as it improves space perceptions no end. Also fitted externally was a fold-down luggage rack at the rear.

EUROPEAN METHOD
Inside the Wolf Pup are a number of surprises, the first of which is the décor – what you might call “toned down American” – which is more acceptable to Australian eyes. Secondly, those used to large areas of empty space in US-sourced RVs will be interested in the very European approach used here. This 4.32m (14ft 2in) rig has two bunk beds, a toilet/shower cubicle, a kitchen and a dinette that can be folded down into a bed. Naturally, everything is modestly sized but it’s a point of note about what can be achieved.

Starting at the front, there are two bunk beds, with the top one at 0.72m (2ft 4in) wide narrower than the bottom one at 1.15m (3ft 9in). Both are 1.9m (6ft 3in) long and feature a reading light. The top bunk suffers slightly from the curving ceiling but would suit a small child or be a good storage area. The lower bunk also gets a window at the foot of the bed.

At the other end of the van, the fold-out bed measures 1.78x1.22m (5ft 8in x 4ft) and comes with fly-screened windows all round. To gain access the table either has to be folded out of the way each night or the dinette seats have to be climbed on.

The dinette can also be used as a bed – it does of course have to be made up every night. Maybe I like my comforts, but the mattresses on the fold-out bed and the bunks were on the thin side and I would definitely be considering the innerspring option.

Although this van does have sleeping accommodation for a family of five or six, the dinette is probably only going to seat four in any sort of comfort. The freestanding table can be folded away when not being used. On both sides above the dinette are overhead lockers. There are windows on both sides, the nearside being a slider but the offside is a US-style emergency exit.

IN THE KITCHEN
As you might expect in a caravan of this size, the kitchen is quite compact. Nestling alongside the entry door, the kitchen bench contains a Suburban two-burner cooktop alongside a US-style sink sans drainer. A microwave resides underneath the cooktop. The seldom-seen Suburban cooktop sits proudly on the benchtop. I did wonder, however, given the almost non-existent benchtop area, whether a model with a flush lid might be a better option. General kitchen storage consists of two overhead lockers and a drawer almost at floor level. The area underneath the sink is just an open area with a net front. Undoubtedly the surprise in the Wolf Pup is the size of the fridge – a two-door Dometic 186L three-way. Often in vans and camper trailers the fridge is 100L or less, making this one more than adequate.

Squeezing a bathroom into a 4.32m (14ft 2in) caravan is quite a design feat, but it’s been achieved in the Wolf Pup. Naturally the toilet and shower cubicle are combined, with the toilet being raised slightly off the floor. Height is going to be an issue for taller people, but the recessed floor and a vent that you can get your head into improve the situation.

THE BOTTOM LINE
The Forest River Wolf Pulp proved to be a very interesting little caravan with quite a few features (mostly size related) not usually associated with US-style RVs. It is certainly a different to most designs that you see in Australia, but I reckon the Wolf Pulp will be of interest to either families or couples who don’t have a large tow vehicle or to those who simply desire a small, well-equipped caravan. 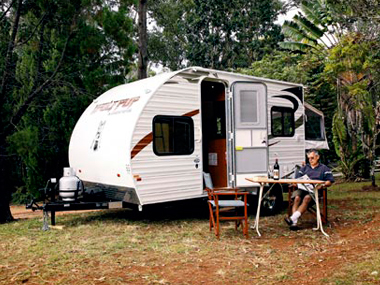