Any RV offers advantages and disadvantages, and fifth wheelers are no different. Compared to caravans they offer more interior space for the same towing combination length, and they’re more stable on the road. Compared to motorhomes, they offer greater flexibility, in that – like a caravan – you can separate your tow vehicle once you’ve parked, making lighter work of local exploration.

However, a downside is that here in Australia we don’t have a particularly wide range of tow vehicles, and that’s especially the case when it comes to fifth wheelers. It’s a problem that Nick Oliver at Cut Loose RV has attempted to address with his range of rigs.

In terms of size, all the Cut Loose RV offerings are designed for ute/tray vehicles that are quite common in Australia– and he’s done a considerable amount of research to get this right. 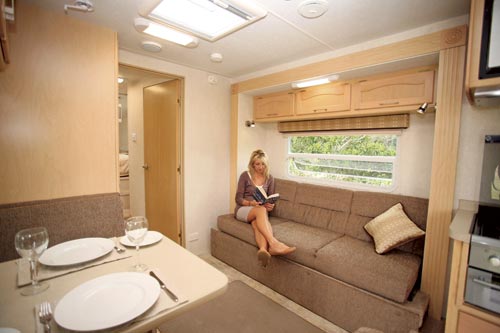 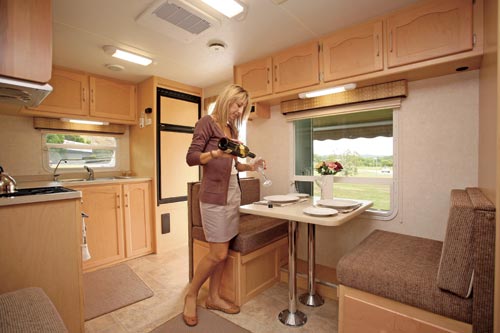 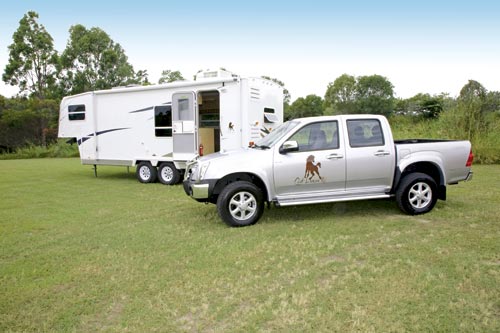 It was therefore with interest that I recently took a look at the largest and latest of the Cut Loose fleet, the Investigator RK. With an external length of 8.33m (27ft 4in), it offers a considerable amount of interior space, although it does come with a Tare of 2850kg and an ATM of 3620kg. That, along with the Tare pin weight of 400kg, means careful consideration is needed when it comes to choosing your tow vehicle.

In our case I was using an Isuzu D Max, which has a GCM of 5900kg and a load capacity of around 1045kg. The dual cab has a Tare of around 1845kg, and while it is certainly capable of towing the Investigator without trouble, it should be loaded with care.

AUSSIE APPROVED
In common with quite a few US-sourced fifth wheelers, the Investigator has a powdercoated 6in railed chassis. It rides on shock-absorber-fitted Equa-Flex leaf spring suspension and 15in wheels. Up front, the Hijacker double pivot hitch is fully ADR compliant.

On the compliance subject, it is my observation that Nick also goes to some trouble to ensure that both the actual fifth wheeler and all the fitted appliances have the necessary Australian approvals. That includes full 240V cabling to Australian Standard 3001.

Above the actual chassis, the body has an aluminium frame, fibreglass composite walls, a moulded fibreglass nose cone and an EPDM rubber roof– one strong enough to walk on to carry out essential maintenance like cleaning the solar panels and roof hatches.

Slightly wider than usual, the Challenge door has a non-security insect screen fitted. Windows are glass hoppers, and mostly only allow the lower third to open. The rear offside slide-out is also worthy of note. Like most, it slides out less than 460mm but it adds greatly to the interior space.

For a fifth wheeler with an external height of 2.89m (9ft 6in), the Investigator has a surprising number of external bins (the lower the height, often the lower the bin capacity). There’s the usual under-overhang bin, two directly behind it for gas cylinders (offside) and battery/electrics (nearside), a large one (washing-machine size) at the offside rear and a smaller one in the rear wall for a slide-out barbecue. A benefit of the under-overhang bin is that you’ll stay dry if you rummage in there while it’s raining!

Internally, Cut Loose has opted for a standard fifth wheeler layout with the bedroom in the overhang. Directly next to that is the bathroom area, with the lounge/dining area and kitchen filling the rear space. There’s a bathroom door which keeps the front area private from the rear.

In the décor department, Cut Loose has definitely moved away from the US look with a light, easy-on-the eye hue for the cabinet work. Lighting, too, has moved from the US preference for incandescent fittings to much more eco-friendly fluorescents and LEDs.

SPACE: THE FINAL FRONTIER
Starting at the front, the bedroom– with its ceiling height of 1.35m (4ft 5in)– requires three easy steps to get in or out of. Some fifth wheeler bedrooms are awkward to use, but not this one. The bed measures 6ft 3in x 5ft 1in and it has bedside cabinets and reading lights on either side. There’s also a very neat-looking bedhead, complete with a third light set in the nose cone. Windows on either side deliver good cross-flow ventilation.

Good use has been made of the large step, with non-symmetrical wardrobes on both sides offering good hanging space. A large, marine-style hatch immediately above this area offers good natural light for both it and the adjoining bathroom.

Having the wardrobes offset from each other allows a vanity cabinet and shower cubicle to be fitted into the nearside wall of the bathroom, in turn allowing a separate cubicle (always a good idea) for the toilet opposite. It comes with a Sealand, foot-operated toilet, a large window and a vent hatch.

The quarter-circle shape of the shower cubicle works quite well, and the vanity area has both an under-washbasin cupboard and a shaving cabinet. However, the size of the basin does result in minimal shelf area.

LOUNGE AND DINING
You could have a sideways-facing lounge opposite the dinette without using a slide-out, but there’s no doubt that it adds considerably to interior space. Three people can sit at the lounge, or more likely two with their feet up. A large window behind and roof hatch above provide plenty of natural light, backed up by a fluorescent light and two halogens.

The dinette, however, is definitely for two people only. Like the lounge, it comes with flat cushions, overhead lockers and additional underseat storage in the form of convenient drawers.

The L-shaped kitchen bench looks a bit cramped but in fact offers just about everything you might want. Located in the corner beside the door and mounted quite high off the floor is a two-door, 190L Waeco fridge. The under-fridge area is used for the external slide-out barbecue.

In the rear wall section of the benchtop is a stainless steel sink with drainer, with both tank and filtered drinking water. With the four-burner cooktop and grill set on the offside wall, there’s a reasonable amount of working space and a good-sized cupboard/drawer/overhead locker area. Often with a corner kitchen bench, the under-bench corner area is difficult to use in a practical way, but Cut Loose solved that by using it as an external bin.

THE BOTTOM LINE
Be aware that the Investigator’s weights make it a marginal proposition for ute-sized vehicles. The advantage of being the largest of the Cut Loose fleet is that it offers plenty of interior space to play with, and the result is that the bedroom, bathroom, living and kitchen spaces are all very liveable without there being too much of a compromise in any one area.

All round, the Cut Loose Investigator RK is a good addition to the growing number of fifth wheelers available in Australia.