UNTIL RECENT TIMES in the Australian RV industry, there hadn't been a great deal of design influence from RV developments overseas. Of late, most such influences have come from Europe but one significant design trend, the fifth wheeler, has come from the US.

The latter has in the past caused some problems associated with compliance and suitability for Australian road conditions. However, much of that has changed, and I was reminded of this when I visited Gympie, Qld-based Performax International to have a look over one of its latest CrossRoads Cruiser fifth wheelers, the CF29CK.

Mike Doyle, the manager of importer CrossRoads RV, was keen to point out that all Australian-approved appliances are fitted locally, and 240V Australian cable is sent to the US for fitting. Quite a number of compliance matters, including a layout that is correctly orientated to a left-hand-side door, have obviously been attended to.

BUILT TOUGH
Construction-wise, the Cruiser is built on a steel chassis, the main components of which are two 200mm beams. In the suspension department, Trailair Equa-Flex (load sharing) suspension is used but it's beefed up by locally fitted leaf springs. Above the chassis is a 14mm ply tongue and groove floor, together with an aluminium frame that supports the Lamilux fibreglass walls, EPDM rubber roof and moulded fibreglass nose cone. Fibreglass insulation is used throughout the walls, roof and floor. To comply with the maximum width requirement of 2.5m (8ft 2&#189;in), the Fiamma F65 awning is mounted above the wall, not on it.

All the windows and door are Hehr items, with the former being tinted glass. External bins are located at the front, with one under the overhang and a right-through bin further back - drainage valves and water connections are found behind the offside door. Larger items will fit easily into the through bin but care should be taken around the plumbing.

Immediately behind the overhang is the bin for the two 9kg gas cylinders (on the nearside), and the compartment for the 100Ah battery (on the offside).

One of the things that prospective buyers find a little daunting is the size of some US-built fifth wheelers. Certainly the tow vehicle is an important consideration but, as we discovered on our test drive, driven with care larger fifth wheelers do handle well.

Our Cruiser actually has an external length of 9.6m or 31ft 6in ("29" refers to the internal length), an unladen pin weight of 703kg, a Tare of 3800kg and an ATM of 4490kg. That leaves a load carrying capacity of nearly 700kg, but this rig has some very large water tanks - fresh at 220L, grey at 302L and black at 152L. If they were all full, then that would leave almost no load carrying capacity, so I'd suggest you fill the freshwater tank and empty the waste at the same time in order to still have adequate capacity for other items.

With the ATM being under 4500kg, it also means the Cruiser doesn't need air brakes to be fitted, but it does still require a substantial tow vehicle. In our case, a Chevrolet Silverado with a maximum trailer rating of 6168kg and powered by a 6.6L 272kW/660Nm turbodiesel engine provided us with plenty of capacity.

Performax not only sells fifth wheelers, but also a range of left-to-right-hand drive converted GMC, Chevrolet and Ford vehicles. Just for the revheads, that not only includes SUVs but also 'little' runabouts like 373kW Corvettes and Shelby Mustangs. As I waited for the Cruiser fifth wheeler to be hitched up, I wandered around and had a bit of a drool…

The entry door of our review Cruiser is located mid-nearside and neatly 'divides' the Cruiser in two: lounge/dining and kitchen to the rear, bathroom/bedroom to the front.

Internal decor is definitely 'US' but, I should note, items such as the upholstery have been toned down when compared to other imports we have seen, to something more acceptable to Aussie eyes.

The Cruiser has three slide-outs, one on either side at the rear and an offside one for the front bedroom area, which means a bit of care has to be taken when parking for the night.

With all the slide-outs open, interior space is definitely the feature, with room to swing several cats. Built into the nearside slide-out are much of the kitchen facilities, with a Swift cooktop, grill and oven, Dometic 186L fridge and LG microwave all in attendance. Given the space available, the microwave is set alongside the fridge, not above it. Also fitted into the slide-out are a full-height pantry with multiple shelves, and four decent-size drawers.

An L-shaped island bench makes up the rest of the kitchen. It's designed to separate the kitchen from the general living area and comes fitted with a twin-tub sink (sans drainer), cupboards accessible from either the entry side or the kitchen side, and an extension. Given the space available, the bench could've been made a bit longer.

Filling the space between the kitchen and door is a cupboard with room for hanging up your clothes.

SPACIOUS INTERIOR
Opposite the kitchen, the offside slide-out contains a two-person lounge and a freestanding table with four chairs. Supplementing those are two easy chairs with ottomans. There are windows all-round in this area, so watching the world go by is quite easy but, although there is plenty of natural light inside, the window openings are relatively small.

Mounted in an end cabinet against the bedroom wall is a large flatscreen TV, along with a DVD player that can be seen from the forward-facing dining chairs and the rear easy chairs.

There's also plenty of room for storing a stack of DVDs and CDs.

One of the advantages of having a larger RV is that the bedroom and bathroom areas can be divided from the general living area. As is the case here with the Cruiser, the front half serves as both bathroom and bedroom. Going through the doorway and up a step reveals the toilet cubicle to the left and the shower cubicle to the right. Like quite a few US fifth wheelers, the shower (with frosted glass) has a large skylight above. Alongside the shower cubicle is a vanity unit with shaving cabinet above. A concertina door can be used to separate the bed area from the bathroom.

Another step leads to the main bedroom area where you'll find a queen-size bed with innerspring mattress set into the third slide-out. There are no bedside cabinets but a couple of bedside shelves are conveniently placed.

Bedroom storage is quite generous and includes a full-width wardrobe (complete with mirrored doors) across the front wall. A shelf on the offside will accommodate a second TV.

THE BOTTOM LINE
There isn't much doubt that the CrossRoads Cruiser is a relatively large fifth wheeler and that has to be considered when parking for the night, not just when driving - not all tourist parks will be able to accommodate a rig of such length. However, the benefits of a large RV are clear: serious and comfortable travel.

For couples who like lots of space around them, the Cruiser is certainly going to provide. 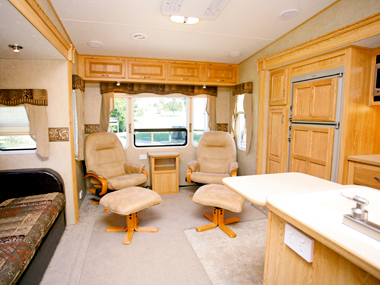 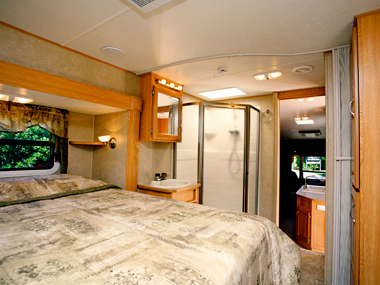