A’van has become known for its innovative range – everything from the original folding camper to B and C class motorhomes. In between of course are conventional caravans and pop-tops. Similar layouts are available in both and the Jack MkII is a good example of the pop-top range.

Our review Jack MkII came from NSW A’van dealer Caravan &amp; RV Central, and sales manager Ken Gooch had one ready to roll when I arrived. “We’ve had a bit of interest of late in single-bed layouts,” he told me.

The attraction of a pop-top is of course a lower towing height and more cross-flow ventilation in the top of the van. Some think that pop-tops are lighter than their full caravan counterparts but a quick glance through the A’van specs for similar layouts reveals them to be almost the same. 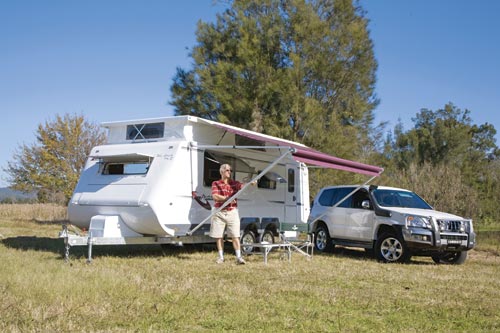 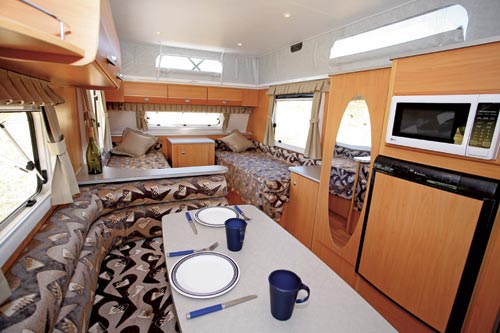 CONSTRUCTION
Like most of the A’van fleet, the Jack MkII is built on A’van’s Centurion chassis. That means a hot-dipped galvanised steel chassis with 100x50mm main rails and punched steel cross-members. That arrangement gives the required strength but keeps the weight down somewhat. The punched holes in the cross-members can also be used to pass cabling and plumbing lines through.

Fairly conventional is the tandem-axle, load-sharing, leaf-spring suspension fitted with shock absorbers, but our review van came with the optional underslung arrangement (axle under the springs) which gives more ground clearance for the van. The 95L water tank sits above the axles.

BODYWORK
A little different from many caravan manufacturers, A’van designs do not have a frame. Instead, a vacuum-bonded, sandwich-panel wall construction is used. A’van reckons the benefits are 25mm of styrene foam insulation, two layers of ply and an aluminium finish which is both easy to clean and dent-proof. The streamlined ends are moulded of course.

The Jack II comes with a front boot – an empty one at that because the 4kg gas cylinders are stored under a protective cover on the drawbar while the spare wheel would normally be fitted on the bumper bar at the rear (the bumper bar had yet to be fitted to our particular van).

Not coincidentally I suspect, given A’van’s heritage, the double glazed windows are made by Dutch company Horrex and include integrated insect screens and blinds. The Hartel door is a stable-door arrangement, the top half having a window and the bottom a moulded-in garbage bin. For keeping insects out, a sliding concertina screen is fitted inside the van. It works quite well but obviously is not a security door, and in a van like this with low, large front windows (i.e., easily accessible) there’s not really much point.

Raising the pop-top roof is a simple matter of undoing the four corner clips, setting the awning for ‘open’ and stepping inside to literally raise the roof.

BATHROOM AND KITCHEN
One of the features of the Jack MkII is that it has an on-board bathroom. That’s a bit of a tricky feat in a pop-top but the top third of the shower cubicle on the interior sides has been fitted with a partition that rises and falls with the pop-top roof. Taller persons have to duck their head to get into the bathroom but there is plenty of head height inside. The rear wall is mostly fibreglass moulding that includes the Thetford bench cassette toilet, fold-down washbasin and shaving cabinet. The washbasin shares its tap with the flexible hose shower.

Having an offside rear corner bathroom invariably means a split kitchen. In this case, a kitchen bench runs across the rear wall, and the Dometic 90L fridge with microwave above are set on the other side of the bathroom cubicle. Built into the rear wall bench are a Swift four-burner cooktop/grill alongside a stainless steel sink/drainer with a smoked glass lid flush with the benchtop. Powerpoints and light switches are fitted to either side of the kitchen bench.

Under-bench storage consists of a large pots-and-pans drawer, two cupboards – one with fitted drawers, a wire basket slide-out pantry and a floor locker. There’s one overhead locker with the rest of that area being occupied by the rangehood and 12V control panel and tank level indicators.

SEATING AND SLEEPING
Designed for two people, the L-shaped dinette has contoured cushions and a pole-mounted table. A shorter person than this writer did find the table set a tad high and it’s also fitted fairly close to the seats on both sides. The shelf on the partition between the dinette and nearside single bed is a welcome feature, as are the two shelves at either end of the overhead lockers. There is some under-seat storage but it’s slightly limited by the wheel arch. Floor locker doors are fitted to both ends of the seat.

In a world where people aren’t the same heights, the beds in this van aren’t either: the nearside one is longer at 2.01m (6ft 10in) and the offside one is 1.88m (6ft 2in). Both have innerspring mattresses and both have LED reading lights and a rear bed shelf, as well as a common bedside cabinet in the middle. Large windows on either side give good ventilation.

Under-bed storage, accessible from both floor lockers and top hatches, is available under both beds but the offside area is fairly busy already with the hot water heater, battery and 12V Electroblok power supply/charger. In our van, the latter was not screwed down for some reason and the cable connections could have been neater.

Fitting in between the offside bed and the fridge are a good-sized wardrobe with oval-mirrored door and a half-height cabinet complete with a wall mirror (no shortage of those). Above this cabinet are both a powerpoint and TV antenna connection.

TOWING
On the road, our Jack MkII was a well-behaved little van. I was using a Toyota Prado but with an ATM of 2010kg, it’s going to be happy behind Commodore or Falcon tow vehicles as well as a good selection of soft roaders.

THE BOTTOM LINE
Like most pop-tops, the Jack MkII has a light and airy interior. Even with a bathroom in the corner it feels like a spacious van and the single beds offer a very versatile interior. And if you don’t like single beds, there’s a considerable variety of similar length layouts available in the A’van range.

For more information, including your nearest dealer, visit www.avan.com.au