It has to be said that the fifth wheel scene in Australia has moved rapidly over the past five or six years. For many, the only image of a fifth wheeler was a large US import that had the door on the wrong side, and required a pick-up to tow.

Well time, tide and tow vehicles have moved on. Yes, there are large fifth wheelers still available, but companies like Australian RV Specialists now have rigs such as the 7.62m (25ft) Drifter, which are suited to a range of locally available utes and twin cabs.

Drifter fifth wheelers are built by Play-Mor Trailers, a US company based in Missouri. According to Australian RV’s Peter Dyer, they fully comply with Australian Design Rules. 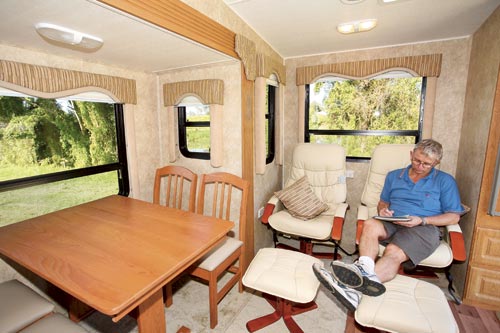 “We get all our fifth wheelers built to Australian specifications, including to the maximum legal width of 2.5m [8ft 2.5in] and with the entry door on the nearside,” says Peter.

ANOTHER POINT OF VIEW

Looking a little different to those on local RVs, the Drifter’s chassis is built using two 20mm (8in) ‘I’ beam rails and rides on Equa-Flex rubber suspension and 225/75 tyres with 15in wheels. The Equa-Flex suspension was a bit new to me but it’s just a standard leaf spring, beam axle setup, except that the Equa-Flex connects the leaf springs together to create a load-sharing arrangement.

For the bodywork, timber is used in the frame and fibreglass covers the exterior walls, with the roof being EPDM rubber. Everything including the floor is insulated and the glass windows are tinted.

Something not to forget is the slide-out at the rear offside.

External bin storage consists of the bin under the overhang, small lockers on either side at the front, and behind those, a right-through tunnel boot. None are particularly big, and the under-overhang bin already has two 9kg gas cylinders and the house battery in residence. Actually, the front bin isn’t too bad for the gas cylinders – when it’s raining they can still be opened and closed without getting too wet.

Our Drifter came with a rear-door entry and featured a layout with a rear kitchen/dining/lounge area, a mid-section bathroom and a front bedroom in the overhang. It’s very hard with US imports to get away from the typical US-style decor, but the interior of the Drifter isn’t too bad, and most of the irritating tizzy-looking features aren’t there. With the slide-out opened up (just a push of a button), there is plenty of space in the rear. Although the windows are quite large and thus give a reasonably spacious feel, the openings are not, which limits the potential air flow. Internal ceiling height in the living area is 2.11m (6ft 11in) but in the bedroom area it reduces to 1.52m (5ft).

The slide-out contains a free-standing table and four chairs, while along the rear wall are two leather upholstered easy chairs complete with foot stools. They are conveniently placed within plain view of the 66cm flatscreen TV mounted on the opposite wall. The rest of the entertainment section – AM/FM radio/CD player, DVD/video player – and several cupboards are in the same cabinet as the TV.

Most of the kitchen bench area sits between the entry door and the bathroom further forward. That contains a twin enamel sink without drainer, Stoves four-burner cooktop/grill and microwave in the overhead lockers above the cooktop.

For storage, there is one overhead locker and one cupboard, augmented with six good-sized drawers and full-height, multi-shelf pantry. A twin-incandescent light fitting illuminates the sink area and there’s a single powerpoint.

Not mentioned yet is the good-sized Dometic 175L fridge in the rear nearside corner above a couple of drawers, well positioned within arm’s reach of the easy chairs.

The bathroom and bedroom areas are partitioned off from the living area with a step and a doorway. The bathroom is split, with the shower cubicle on the offside (behind the entertainment unit) and the toilet cubicle opposite. A small vanity unit with washbasin, cupboard and drawers sits outside the shower cubicle. A large skylight illuminates the shower.

There is also a large wardrobe with drawers underneath, installed alongside the toilet cubicle.

From the bathroom area, two more steps lead up to the centrally located queen-size bed. It sits off the floor and there is a bedhead of side wardrobes and overhead lockers but no reading lights. There are windows on either side (lower part opening only) and a ceiling vent. There is also a curtain that can close off the bedroom area from the bathroom.

There are plenty of appropriately placed light fittings (apart from the bed) but they are all incandescent rather than the more energy-efficient variety. The 12V power comes from two 100Ah deep-cycle batteries. The 240V powerpoints and cabling have all been modified to meet Australian standards.

There are some US-style layouts that don’t sit well in Australian eyes, but this one is certainly more compatible and has a few features of interest. It’s quite a spacious unit, both in the living and the bedroom/bathroom areas, and it can be towed by a reasonable selection of vehicles.