I have often wondered why just about every fifth wheeler I’ve ever seen has tandem axles. I understand there are good engineering reasons for this, but I also know there are plenty of single-axle caravans around.

There are some good reasons for having tandem axles, but what if a smaller rig is desired? Well, Andrew Brennan, Winjana RV principal, decided to find out. The sidebar to this story is it happened accidentally. A customer of Andrew’s had a slide-on camper but was a bit unhappy with the slightly top-heavy ride. The base structure of the slide-on was sound, so the Winjana RV team decided to add an overhang and an axle… and the Strzelecki 520 was born! 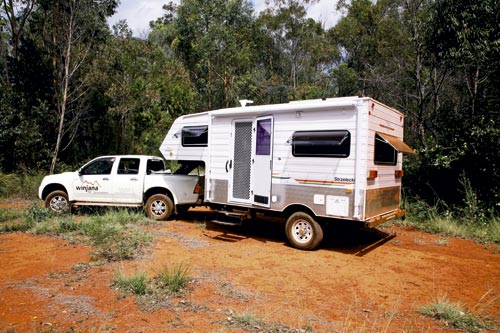 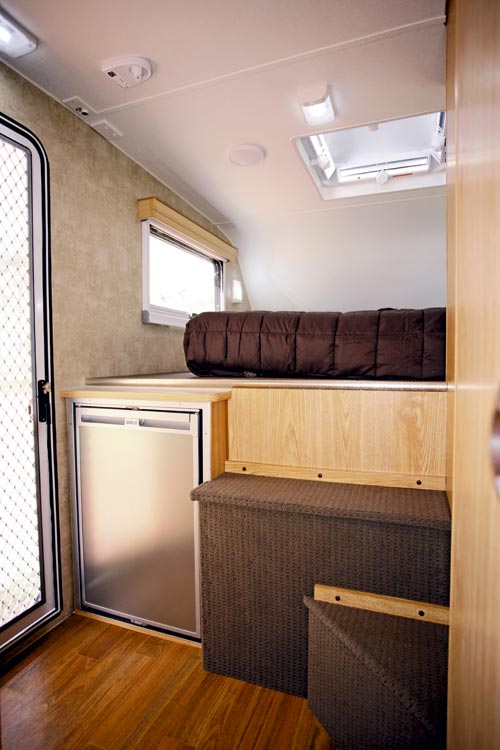 This rig is well-suited to people who want a short van that can handle undulating terrain. I experienced these two benefits first-hand during a tow test in the back country around Toowoomba. This rig’s other asset, I discovered, is that sharp corners are more easily handled.

Like the rest of the Winjana fleet, the Strzelecki is built on a powder-coated 150x50mm steel chassis. Being a fifth wheeler, part of the chassis design includes the overhang structure for the pin hitch which, in this case, is external to the bodywork. There’s nothing wrong with this, and it does give a neat mounting point for two 9kg gas cylinders. Al-Ko torsion-style independent suspension is fitted to the single axle, along with shock absorbers and 16in wheels shod with offroad tyres.

The ‘landing gear’, (the front jacks) for lifting the 520 off the tow vehicle, is manually operated and quite easy to use.

Unlike the time-honoured meranti timber that many RV manufacturers use for their framework, Winjana RV imports Canadian spruce and used 1½x1in pieces for the main frame and three-quarter-inch ply for the floor. Above, three-eighths-inch structural plywood is used for the entire roof. This all comes with a 25mm layer of polyester insulation and aluminium cladding on the outside, with acrylic hopper windows and a Camec security door completing the structure.

With a rig this size, external storage capacity is going to be a bit limited, but there’s a bin door at the nearside rear that gives access to a large locker under the dinette seat. Next to that, a smaller door hides a 12V socket and gas outlet. A second bin at the front offside is mostly taken up by the house batteries. Naturally, an awning is fitted and out of sight on the roof are two 150W solar panels.

So what is the layout of this mini fith wheeler like? Well, with the exception of the fridge location, it’s very like the layout of a Toyota Hilux-based motorhome, with the entry door directly behind where the passenger seat might be. The bed is in the overhang, the bathroom is on the offside, and a small dinette fills the rear, leaving just enough room for a kitchen bench along the nearside wall.

Each of the cupboard doors, drawer fronts and pelmets are nicely finished in North American oak and, despite its small size, the 520 really doesn’t feel that cramped. Up front, the bedroom is quite simple, with a queen-size mattress on the floor base, small bedside cabinets, and windows either side. The wall-mounted LED lights are a nice touch, too.

The bathroom is surprisingly large for a rig of this size. Indeed, there is a separate shower cubicle, Thetford cassette toilet cubicle and a small vanity with a washbasin. Both a window and a roof hatch ventilate the bathroom adequately.

The most compact item in the 520 is the kitchen bench. It’s just lengthy enough for a four-burner cooktop/grill, and a stainless steel sink and drainer with tank and filtered water. The microwave sits in the cabinetry above the cooktop, the fridge on the other side of the doorway tucked into the bed base. Extra kitchen storage is provided by way of a two-door cupboard, drawer and floor locker. It’s all very tightly squeezed together but it’s also very workable.

In the rear, the dinette with windows all round has a good view of the outside world. Two sideways lounges face each other and there’s a table in between that can be lifted out of the way if not needed.

The remaining space between the dinette and the bathroom is nicely filled by a wardrobe cabinet, the top half for hanging clothes, the lower area with drawers and a cupboard.

Apart from anything else, reviewing this Winjana fifth wheeler gave me good practice at spelling the word Strzelecki. It took me a few goes! That aside, the 520 is an interesting and useful addition to the Winjana range. With its limited internal space when compared to a tandem-axle rig, it won’t be for everybody, but it offers plenty for a couple of travellers who are happy with a smaller rig. And let’s
not forget the benefits to stability offered by fifth wheelers. It’s no secret that having the coupling directly above the axle, rather than well behind, improves towing dynamics.