With its sci-fi styling, Track Trailer's Tvan always looks at home in the most inhospitable places but it still draws as many curious looks today as when it first surprised the camper trailer market with its arrival in 2000.

The ongoing attraction of the Tvan can, at least in part, be attributed to its innovative features, such as its hard-shell cocoon that keeps you dry, off the ground at night and allows a quick set-up, and an advanced offroad suspension system designed to follow the most capable 4WDs almost anywhere. 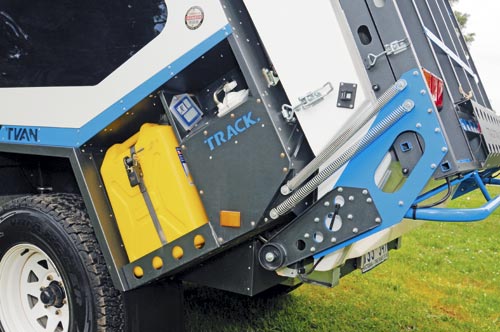 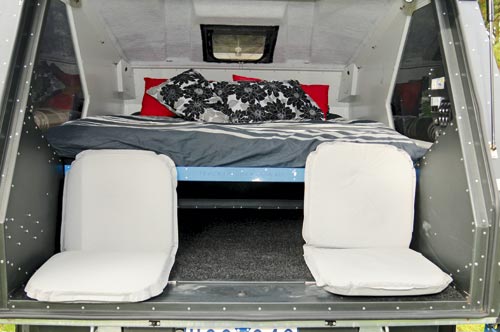 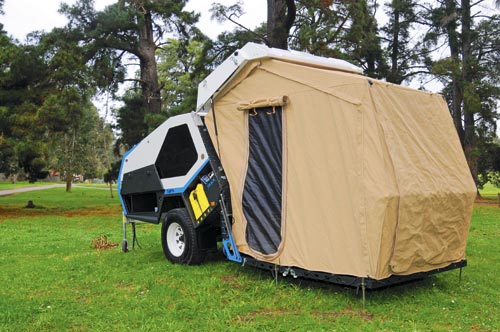 Initially, the range included just one Tvan, which came with a mattress; basic water supply; deep-cycle battery and plenty of storage space, but things quickly expanded. Finding that most buyers were adding equipment from the extensive options list to their Tvans, Track Trailer packaged its second series of Tvans into two separate models, the Canning and Murranji. These were followed by the more basically-equipped Tanami. Now, from early 2012, the range has grown to four.

All of the models are quickly identifiable by their highlight colours: blue (Yulara); green (Tanami); red (Canning); and orange (Murranji). But the Yulara eco-camper is designed to appeal to a different type of buyer than its up-specced brothers.

Tvans have historically been aspirational purchases - people with lower-spec tent-based campers often dream of owning one. But the ultra-light Yulara, with its relatively sparse level of equipment, is designed primarily to get basic tent campers off the ground and into something waterproof, high-tech and more comfortable.

While its standard spec includes a high-density queen-sized mattress, 70L water tank with a hand pump, 105Ah AGM battery and an independently-fused power box with voltmeter, Track Trailer expects these experienced campers to bring their existing equipment, such as gas cylinders, stoves, etc., to the party.

Even more importantly, these travellers won't need to upgrade their tow vehicle to haul the Yulara. With a Tare of 890kg and ball weight of just 75kg, it can be towed comfortably by vehicles such
as the Nissan X-Trail, Toyota RAV4, Subaru Forester, and more.

But for these buyers, the real attraction of the Yulara is that it shares the same durable riveted steel and aluminium body construction, clever fold-away drop-down tent, hot-dipped offroad chassis, MC2 military-grade suspension, electric brakes and DO35 coupling that have proven so capable on other Tvans.

What is missing is much of the added bling, like a kitchen, gas cylinders, ensuite tent, A-frame-mounted storage and other equipment. But you can easily tick these boxes from the lengthy options list when ordering your Yulara, or retrofit them.

When this entry-level Tvan was initially launched as the Tvan Sport a few years ago, it wore the narrower MkII Tvan body, which featured an outer fibreglass skin over a glued marine ply and plywood superstructure.

In its new guise, however, the Yulara boasts the same all-metal shell as other Tvans, with high-density, closed-cell foam sandwiched by an aluminium skin. This has freed up internal space and created a stronger, more efficient shell that is also more resistant to exterior damage.

AT HOME IN THE DESERT

All of these design features made the Yulara the perfect trailer for our recent trip across the Simpson Desert, performing a dual role as an equipment carrier and sleeping quarters for Marg and Doug Sprigg, who were re-enacting their historic first vehicle crossing of the Simpson in 1962 (see page 168).

Since we were accompanied by a full outback catering service, we didn't need a kitchen, sink, or a bank of batteries and fridges. But we did need cavernous storage space for bulky swags, sleeping bags, plus firewood for our party of 19 and space for a large fridge.

The Yulara was ideal for the task, and when its load was disgorged each evening, it became a comfortable and spacious sleeping space. The camper's insulated body and mattress on a thermally-efficient plywood base were much appreciated as temperatures regularly dropped below zero.

Quick set-up has always been one of the Tvan's strong suits and nothing has changed with the Yulara. After unfolding the hinged tent floor by releasing four over-centre clamps, plug in the stabilising feet, unzip the tent from the bag located inside the rear hatch lid and peg it out around the metal floor base using the built-in elastic perimeter cord. Tensioning is achieved by a simple swing-over arm that drops into two corner pockets in the tent, while a laminated timber shelf and two expandable poles support and tension the canvas. In experienced hands, the whole process will take fewer than five minutes.

Once you learn how to get the canvas back into its bag, packing up is nearly as easy. But if you are only planning an overnight stop, you can simply zip the (optional) flyscreen onto the back of the camper once the hatch is open and forget about the tent.

The Yulara also gets the same thick automotive seals and compression catches as other Tvans, so the cabin and side storage lockers remained dust and water-free throughout our trip.

For the majority of the 5000km Melbourne-Simpson Desert-Birdsville-Melbourne round trip, the Yulara was towed by a 4.8L six cylinder (petrol) Nissan Y61 GU Patrol and, to be honest, it was easy to forget it was attached.

The only reminder was the under-slung spare wheel that is the Yulara's lowest point, which occasionally dragged on the crest of sandy tracks that the Patrol cleared easily.

The Yulara would have been better equipped with the optional A-frame-mounted spare wheel. However, Track Trailer points out that when towed behind a light 4WD, the ground clearance of the Yulara with the under-slung spare would still be greater than the tow vehicle. But we'd be happier to see it located higher between the chassis frame cross-members or on the A-frame.

The standard flexible stone mesh did a good job of minimising damage to the Yulara's facade and provided a workable storage space for a couple of spare-tyre carcasses and a bag of firewood. But despite the protection, some stones inevitably deflected higher, peppering the exposed powder-coated aluminium panel immediately above. The solution is either slower speeds, or some additional stone cushioning covering.

If the Yulara was ours, we would also probably have ticked another couple of option boxes - a second 70L water tank; front storage, which incorporates a higher mounting for the spare wheel and a storage box to hold a portable fridge/freezer; second 105Ah battery with a management system; and a rear insect screen for quick overnight stops.

But that's the beauty of the Yulara: everyone will bring their equipment - and ideas - to the party.