There are certainly some disadvantages to conducting an RV review in the rain – wet photographers and grey-looking photographs, to name just two. But one of the pros is that the reviewer tends to spend more time inside the RV, sitting back and taking more time to check things out.

That was the case with this Sunliner fifth wheeler, which the manufacturer has recently added to its stable of motorhomes and caravans. This particular model was one of the new 8.71m (29ft) units and was fresh from the show circuit. In fact, I intercepted it between shows, courtesy of Australian Motor Homes in Newcastle, NSW.

The team at Australian Motor Homes will tell you that all Sunliner fifth wheelers, including this one, are pitched squarely at ute-sized tow vehicles without compromising interior space. Indeed, this 29-footer can be purchased as a package with a Ford Ranger dual-cab ute. 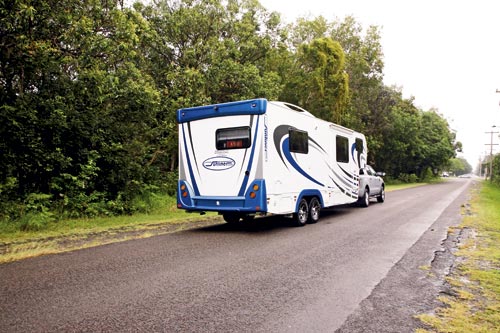 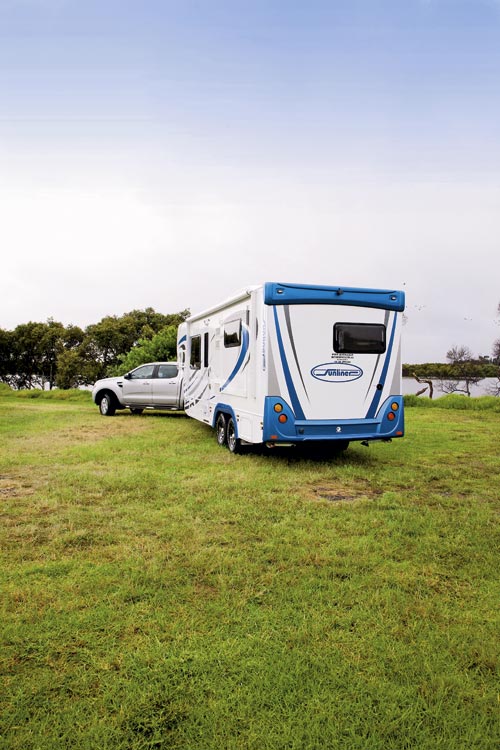 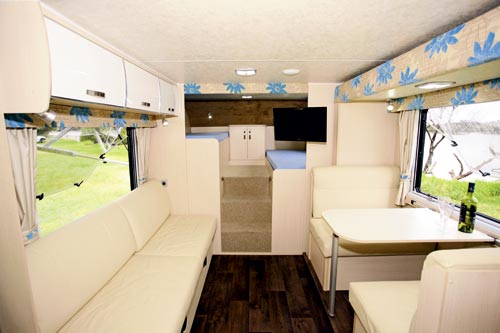 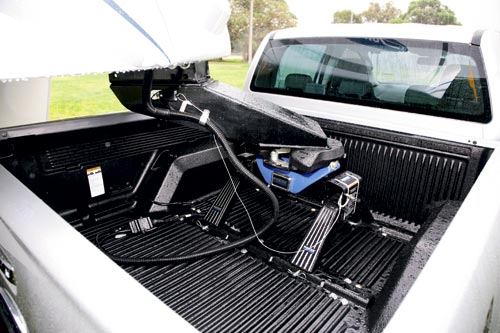 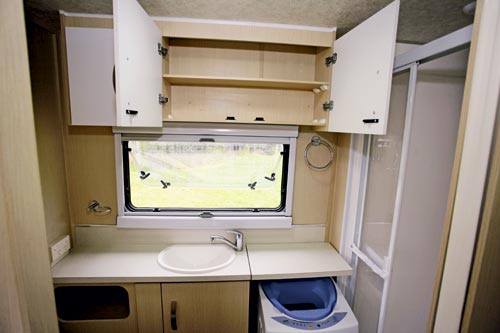 While the Ranger is available with a smaller 2.2L turbodiesel, there’s no doubt that the larger 3.2L engine, with its maximum power output of 147kW and max torque of 470Nm, is the way to go with this fifth wheeler. As I coasted around the hills and dales of the Newcastle area, the Ranger rumbled along easily, making life very pleasant.

In many ways, the Sunliner fifth wheelers are built just like Sunliner caravans. This one comes with a galvanised chassis (Durotorque, in Sunliner speak) with punched-hole cross-members that rides on Al-Ko IRS suspension. The Al-Ko torsion-style suspension is not commonly used by Australian manufacturers, though it is used extensively in Europe and America.

The electric stabilising jacks, which are not found on caravans, are quite common on fifth wheelers.

Above the chassis, the body has composite fibreglass (‘Thermotough’) walls and a moulded front and rear.

There is no shortage of external storage in this fifth wheeler – in addition to a front bin under the overhang (which also has access from a nearside door), there are three along each side. On the offside, the two under the slide-out are a bit awkward to access and the nearside one built into the overhang is quite high, but it is still fairly accessible. Like the two slide-outs, the awning is power-operated.

There are two specification levels available in the Sunliner fifth wheelers. Our review unit was the higher level Spec 2, so it came with a few extra goodies, such as a 135W solar panel, two 100Ah batteries, Truma gas air heater, 1000W inverter, electric awning, external shower and external speakers.

Inside the 29-footer, Sunliner has broken with fifth wheeler convention by putting the main bed towards the rear instead of in the overhang. It’s just one of two in the nine-model range to have this feature, though. There is still a bedroom up front, though, albeit with two single beds. That leaves room for a lounge towards the front and a kitchen in the middle. The front offside slide-out houses the dinette, while the rear nearside slide-out acts as a bedhead.

The internal décor is typically Sunliner – a contemporary looking interior, with pastel shades, that makes the best use of natural light. All the windows have integrated screens and blinds, and except for the bathroom, full curtains as well. I must admit, I am not a fan of the square-edged look to the benchtops – it looks a bit retro to me, but perhaps I am the one who’s out of date. There’s nothing retro about the lighting system, though. It’s all LED and putting the main electrical panel, along with the radio/CD player somewhere central, like above the entry door, is always a plus in my book.

Starting at the front, the two single beds in the overhang have foam mattresses and measure 1.88x0.76m (6ft 2in x 2ft 6in). They are not at the same height – the nearside one is raised to accommodate the external storage bin. Given the storage capacity elsewhere, I did wonder about that feature.

Both beds have reading lights, a drawer at the foot of each bed and a central bedside cabinet. Only the offside bed has a window, but the ceiling fan hatch offers a bit more ventilation.

One of the benefits of the slide-out in the lounge/dining area is that it creates plenty of room to stretch out. Both the nearside sideways-facing lounge and the dinette seats opposite are upholstered in leather, and the flatscreen TV mounted above the rear-facing dinette seat is best seen from the lounge. Lockers are fitted above the lounge and the seat can be lifted to access the storage area underneath, although part of that space is taken by the Truma space heater.

To create more space in the lounge and the rear bedroom, Sunliner has opted for an L-shaped kitchen bench. The triple-burner cooktop (with grill and oven) is built into the side bench and the stainless steel sink/drainer is at right angles to that, leaving some benchtop space in between. It also allows four drawers to be included, as well as a very wide wire basket slide-out pantry under the sink. On the opposite side is a full-height cupboard, along with a 190L three-way fridge with a microwave above.

Measuring 1.85x1.55m (6ft x 5ft), the bed takes up most of the rear slide-out. With the slide-out open, there is plenty of walk-around space but with it closed up, there is none at all. Above and below the offside window are lockers and wall cupboards. I suspect that if you wanted a longer bed, the wall cupboards would have to go!

There’s no shortage of space in the rear bathroom, with its nearside shower, offside Thetford cassette toilet, washbasin and centrally-fitted top-loading washing machine. There are also a few cupboards and lockers, as well as a large (for a bathroom) rear wall window.

When I drove out of Australian Motor Homes, I was a cautious about the Ford Ranger and fifth wheeler combination but I changed my mind once on the road. It motored along very nicely, proving that a comfortably-sized fifth wheeler can be towed satisfactorily by a ute.

There are a number of layouts and lengths available in the Sunliner fifth wheeler range, so even if you’d like a rig without a slide-out and/or a bed in the overhang, they can all be towed by a ute!