IT WILL COME AS a surprise to no one, even the grey nomad set, that we are living in the age of technology. And Sunland Caravans' enterprising proprietor, Roy Wyss, is well aware of the potential advantages.
One of the trendy words associated with all of the new digital technologies at our disposal - iPhones, iPods, iPads, etc. - is 'apps', as in the 'applications' that can be used on the devices. At present, there aren't too many apps specifically associated with the RV industry, but what happens if you fit something like a C Bus microprocessor into a caravan, along with a few touch screens and some extra cabling, as well as a few apps to your iPhone?
That's exactly what Roy Wyss did. The resulting rig, this Winton IV offroad van, is quite an interesting unit, to say the least, and definitely represents a technological step forward for the RV market.
Imagine being able to back up a tow vehicle using the rear view camera, lower the power jack to hitch up the van, wind up the awning, fold the van step away and shut down the power system, all without ever having to leave the driver's seat. Of course, you do have to get out to finish the hitching process, but you get the idea.
Once all set up and relaxing inside the van, could you see yourself using a single small device to dim the lights, tune the sound system and TV, close the roof hatch, or just turn everything off for the night?

THE FUTURE IS NOW
It's true it has been possible in the past to do most of those things with individual remote controls, but with this design, everything is possible using just your iPhone. That said, I did note with interest that the wall pouches near the entry door had a few remote controls stashed in them...
In addition to the iPhone control, two touch panels are fitted into the van, one in the overhead lockers near the entry door and the other above the dinette, complete with other essentials like generator and solar panel controls. Impressive stuff.
Naturally, all this technology requires a very reliable power system and this van's owner did not mess around. The 12V power comes from a massive 320Ah lithium-ion battery. Three 180W solar panels and a 60A mains charger (which can also be supplied from an Onan 2.3kVA generator) also back up the battery. When a bit of peace and quiet is needed, the 1kW inverter can deliver some of the 240V load. Of course, you'll need to make sure the iPhone/iPad remains charged.
In many ways, all this technology matches the construction of the Winton IV. Built in the Sunland style, it comes with a 100x50mm (4in x 2in) box section hot-dipped galvanised chassis, and 150x50mm (6in x 2in) drawbar rails that run back to the suspension mounts.
The van features Cruisemaster independent suspension with twin shock absorbers on all wheels, and three moulded 125L polyethylene water tanks sit between the chassis rails.

UNIQUE FEATURES
A welded aluminium frame is the mainstay of the body structure that is clad with 6mm fibreglass composite panels, with the lower waist protected by alloy checkerplate.
One of the trademark features of a Sunland van is the front boot: instead of just a single bin, there are three lower and one above. One of the bins is dedicated to two 9kg gas cylinders, another for the generator, which leaves the drawbar clear for the handbrake, DO35 hitch and electric jack.
An external slide-out kitchen has also been fitted, complete with four-burner cooktop, sink and picnic table.
With the power awning and steps extended, a look inside the Winton reveals a standard front bedroom, rear bathroom and rear entry layout, with the superb Sunland cabinetry a highlight. The glossy red inlays used in places such as the kitchen splashbacks and bathroom mirrors are a mark of difference and add a nice contrast.
One of the key advantages of a 7.16m (23ft 6in) van is the good-sized eating/food preparation area it allows. This particular kitchen has a generous amount of storage and benchtop space, while saving room for a Swift four-burner cooktop/grill/oven, stainless steel sink/drainer and an under-bench microwave. Across the way, a Vitrifrigo 240L fridge, along with some extra storage cupboards, fills the space between the dinette and bathroom.
Looking very inviting, the leather-upholstered dinette comes with essentials like wall cushions and tri-fold table, plus a cupboard between it and the bed. Although not really for use over long periods, the dinette could easily be used as a desk, with 240V powerpoints (mains and inverter supplied) and a 12V socket. In addition, there's a slide-out shelf in the overhead locker for a printer.
There isn't a front window, but strategically-placed wall mirrors and large side windows aid the space perception. There is plenty of room in the bedroom - the queen bed and bedhead fit in very neatly.
The rear bathroom, with nearside shower cubicle, offside Dometic cassette toilet and attractive vanity, has enough room for storage space and a front-loading washing machine. 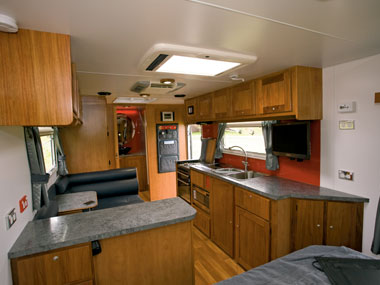 THE BOTTOM LINE
This review is only a brief summary of what is a very high-tech caravan.
The customer clearly had some very specific needs (and ideas), and this Winton IV is a very interesting demonstration of how technology has been used to meet those requirements.
That technology, of course, does come at a price. However, that outlay also means a certain amount of reliability and peace of mind, which bush campers and outback travellers can never have enough of.
This van is something of a contradiction in that it is built for very tech-savvy travellers who like to be away from civilisation for extended periods. But wherever they go, it will be in a modern and comfortable van that ticks every box they have asked for.