Generally speaking (dangerous words to use too often), caravans designed for offroad and remote travel are, on average, about 7m (23ft) long, have a Tare of around the 2500kg mark and have tandem axles.

So what happens if a customer wants a shorter, lighter offroad van with all the characteristics of a larger rig? Well, Sunland Caravans proprietor Roy Wyss decided to find out by chopping a metre off one of his tried and trusty Longreach vans. 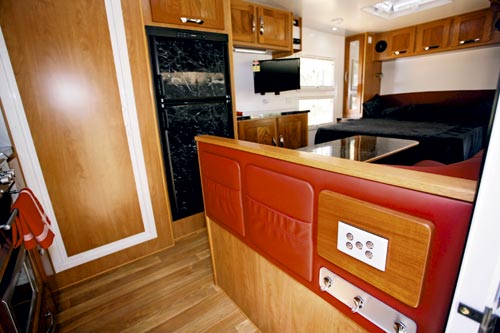 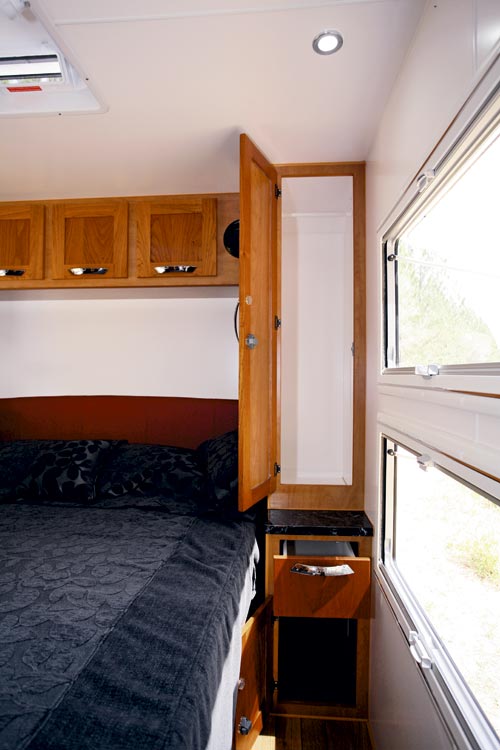 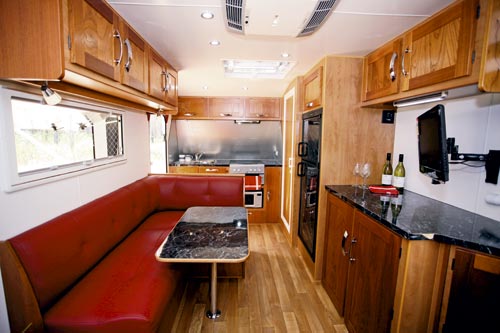 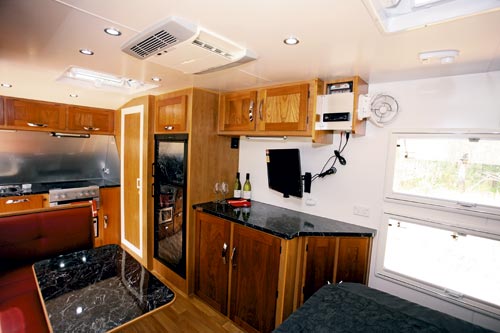 Of course, in reality the metal surgery wasn't really that brutal. Instead, the Sunland team built a hot-dipped galvanised chassis to suit a van length of 5.33m (17ft 6in) using 100x50mm (4x2in) RHS steel for the main rails and 150x50mm (6x2in) RHS for the drawbar rails. Those are laminated to the chassis above and run back to the suspension mounts.

Given the length of the van, only a single axle was required and that has been fitted with Cruisemaster independent suspension consisting of trailing arms, coil springs and dual shock absorbers for each wheel. Those 16in alloy wheels are fitted with 275/70R16 Goodrich tyres. This setup leaves enough space to mount the moulded 125L polyethylene water tank behind the axle.

The pointy end comes fitted with a Hitchmaster DO35 coupling and the all-essential hand brake and side-mounted jockey wheel. The two 9kg gas cylinders and regulator are neatly covered with protective bags and, since the Longreach does not have a front boot, the large alloy propeller plate storage bin is a good idea.

The storage bin blends in well with the body cladding because, although the fibreglass upper is all white, the lower areas are covered by the same protective alloy propeller plate.

Like all Sunland vans, the Longreach comes with a box section welded aluminium frame with insulation in between. It has Dometic Seitz windows, along with a Camec security door and a Dometic awning. Someone must have had their tape measure out because there is minimal, but just enough, clearance between the door and the adjacent window to have both open at the same time.

Stepping in through the door at the front end of the van reveals a neat layout with a front-offside corner bathroom and the kitchen on either side of it. That leaves space for a mid-nearside dinette, a large half-height cabinet opposite and an island bed in the rear.

Like any Sunland van, the cabinetry is of a very high quality. It's a joy to look at. It's stained in a darker hue, offset by the white walls and ceiling. The windows, including double hoppers on both sides of the bed, offer plenty of natural light, and the door and locker handles are so easy to open - even people with arthritic fingers will manage.

Items such as beds and dinettes really can't be downsized very much so, in smaller vans, things like the kitchen and bathroom are reduced in size. The kitchen bench occupies all of the front wall space that's not already taken up by the bathroom. It comes with the usual items: four-burner cooktop and grill, and a stainless steel sink with drainer. The microwave is located under the grill and it's in a slightly awkward location but, given it requires mains power, it might not get used too often. Kitchen storage isn't too bad, with several overhead lockers and drawers. The 284L fridge sits on the other side of the bathroom, so it is convenient to both the kitchen bench and the dinette table.

There are no surprises in the moderately-sized bathroom, which has a bench cassette-style toilet, flexible-hose shower and a small washbasin. A good-sized roof hatch and a small window provide ventilation.

The L-shaped dinette is reversed from the norm, with the partition at the kitchen end, creating more space to walk around the bed.

On the opposite side, the two-door cabinet provides not only some shelved storage space but also useful benchtop space. The cupboard storage is slightly deceptive because the cupboard contains the Truma 14L water heater. Mounted on the wall above, a TV on a swivel arm can be seen from either the dinette or the bed. That same piece of wall is also fitted with both 240V and 12V sockets.

In the rear of the van, the posture-slat bed base comes with a queen-size mattress and a compartmentalised storage area. There is a single drawer at the foot of the bed, wardrobes on each side, bedside cabinets and overhead lockers. There is a 12V fan in the bedroom - a rarity for caravans - but it is quite useful.

The Longreach is built for remote travel and camping, so there are plenty of goodies in the electrical departments. All the low-energy LED lights illuminate things as they should and, on the roof, a 180W solar panel can be used to keep the two 100Ah deep-cycle batteries charged. Those features, plus the three-way fridge, mean that extended stays in the bush, sans power, are quite possible.

From a towing point of view, the Longreach is a good prospect for mid-sized tow vehicles given its Tare of 1644kg. With an ATM of 2600kg, it has a very generous load capacity.

The van comes with a rear-view camera, more commonly associated with motorhomes, but useful nonetheless.

A van which is only 5.3m (17ft 6in) long, such as the Sunland Longreach, will have some internal space compromises, but the shorter length also has some considerable advantages. These are predominantly in the towing department and, for keen offroaders, it's much easier to handle undulating terrain. A lighter van might also mean a smaller tow vehicle and/or less expensive fuel bills.

There is certainly nothing wrong with the Longreach's layout, which is built in the usual Sunland style and very practical to live in.

· To head off into the wild blue yonder with it!