South-east Queensland is a breeding ground for specialist offroad caravan manufacturers and that’s not really surprising, given the proximity of offroad terrain such as beaches and inland bush tracks.

One of those specialist manufacturers is Spinifex Caravans and, under the direction of owner Steve Thompson, the company produces a range of caravans for some of the toughest roads around Australia.

This includes the EpiX range of vans and, recently, a unit which is slightly longer than normal (7.32m/24ft) came to our attention. 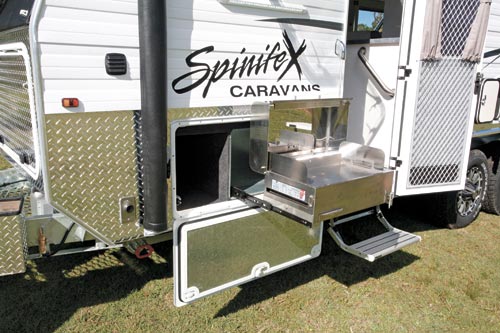 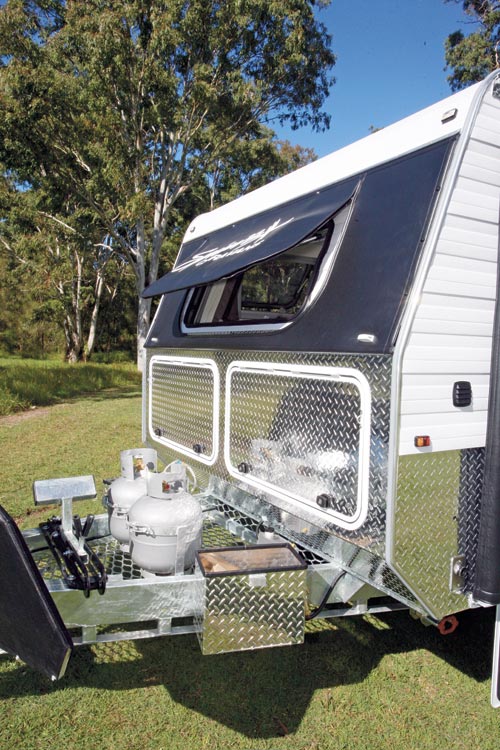 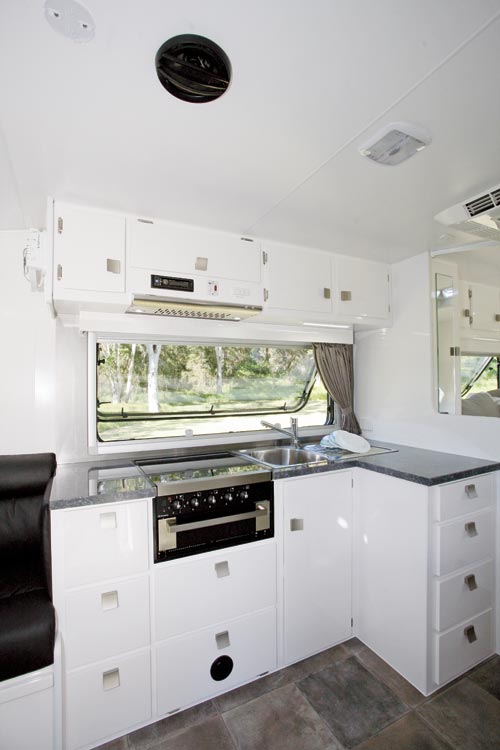 When I had a look at it, there were plenty of other things to get my attention, such as the large twin-door front boot. It has to be large because, apart from anything else, it houses three 120Ah batteries. In addition to the boot, there’s front tunnel storage, although the nearside is taken up by a slide-out barbecue. The extended drawbar comes fully-loaded with a 6t McHitch coupling, Trail-a-Mate jack, mesh stoneguard, diesel heater fuel tank, mesh rack, two 9kg gas cylinders and an outboard motor rack! Two spare wheels and a pole carrier are mounted at the rear.

The length of the EpiX offers great potential for a layout designer, especially in fulfilling customer requirements. The full-width rear bathroom takes up a fair amount of space but it leaves room for an east-west island bed, L-shaped kitchen and a club lounge at the front.

The bright white interior is one of the first things you’ll notice when you step inside the van and, while it might sound a bit stark, it’s nicely offset by grey marble laminate benchtops and the black leather dinette. All of the cabinetry edges (inside cupboards and lockers) are well-finished in two-pack paint and, for a bit of variety, the overhead lockers are either top-hinged or side-hinged. The door handles are easy to grab for those with arthritic or inflexible fingers.

The major feature of this EpiX layout is the club lounge. Large enough for two people to put their feet up, it has almost panoramic views outside the van through the large windows, entry door and kitchen window. A decent-sized table is mounted on a single pole, which provides an easy swivel, but I did wonder why a van of this calibre didn’t have the more versatile Zwaardvis swivel.

A row of overhead lockers fills the front wall but there’s none on the sides as they would be in the way.

Given the length of the van, the kitchen bench might seem short but Spinifex has cleverly designed it in an L-shape, with an extension against the bedroom partition. This adds two things: benchtop space and four more drawers.

The under-bench area is well fitted out with drawers, as well as a cupboard and floor locker, although most of the latter is occupied by the Eberspacher diesel space heater.

The kitchen comes with the usual appliances: four-burner cooktop (three gas, one electric) and a stainless steel sink. Across the way, the 230L 12V compressor fridge sits off the floor at a user-friendly height and the Daewoo microwave is not in the usual position above the fridge, but under the bench in a waist-high cabinet. This arrangement not only creates more benchtop space (in part for a flatscreen TV) but also another two drawers.

In the space above, the overhead locker and the side of the cabinet are used for technology, the former for the satellite system controller and the latter for the water tank gauges, solar panel regulator and the sophisticated Victron remote power controller. A few other vital items, such as 240V circuit breakers, hot water switch and radio/CD player are located on the opposite side in the lockers above the cooktop. Given that steam and condensation don’t mix well with electrics, this is my least favourite location for items like the radio.

One of the reasons I like this particular layout, apart from the front club lounge, is the east-west bed in front of the bathroom. It’s different to the usual front island bed position but still allows for a full bedhead of side wardrobes and overhead lockers, along with small corner wardrobes at the foot of the bed. Small being the operative word – they don’t interfere with the walk-around space and the rear one is only half height in order to accommodate a flatscreen TV.

One other point of note is the two small wall fans – a great idea when a bit of cooling air is needed but you can't, or don’t want to, use the air-conditioner.

The bathroom is of a generous size, with a shower cubicle on one side and a Thetford china bowl cassette toilet, with an SOG ventilation system, on the other.

The rest of the rear wall is taken up by cupboards, overhead lockers, a large mirror and top-loading washing machine hidden in the corner. There is also a linen cupboard fitted in between the shower cubicle and the bathroom wall. There’s only one exhaust fan above the shower but there’s a large window above the loo.

On the road, this EpiX is quite a smooth tower despite its bulk and weight. It comes in with a Tare weight of 3100kg – I know that because I visited a weighbridge while I was out with the van. It also comes in with an empty ball weight of 300kg. That sort of puts it in Toyota LandCruiser territory but only if you are prepared to travel fairly lightly, with a load of less than 400kg. Given the ATM of 4200kg, a larger tow vehicle is certainly more desirable – which I understand the customer for whom this vehicle was built owns.

If you want a van that has just about everything, including a spacious interior and serious offroad ability, then this EpiX certainly fits the bill. But it’s not going to be cheap and, as I mentioned, the tow vehicle has to be considered as well. That said, there are plenty of smaller and less expensive Spinifex vans available. If this one is anything to go by, they won’t be wanting for much.