Over the years, a fair number of both caravan manufacturers and owners have told me how frustrating it is that vans can be described as ‘offroad’ when they’ve had little more than knobbly tyres fitted. Let’s not kid ourselves. If you want to do some serious unsealed road trekking around Australia, conditions are harsh, unforgiving and tough on both your tow vehicle and your van.

Caravans that are truly suited to such an environment need to be manufactured as such, and these invariably come at a premium price. SLR Caravans on Queensland’s Gold Coast specialises in such vans, and has a sound grounding in the area as it also produces 4WD expedition/motorhome vehicles that wouldn’t look out of place on the Dakar Rally.

SLR’s Warwick Boswerger presented us with a 1900 Premium Offroad van, a 19-footer (internal) designed to combine luxury, offroad capability and the ability to free camp for extended periods. 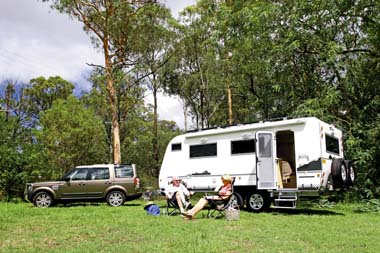 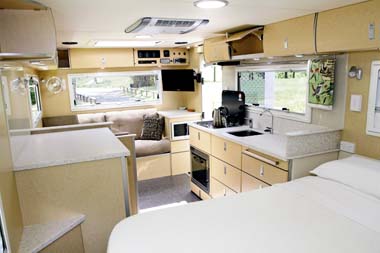 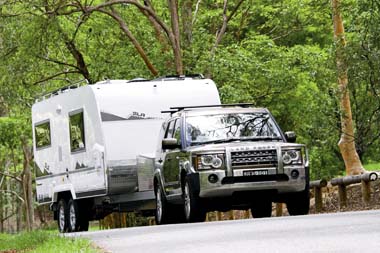 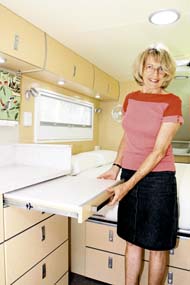 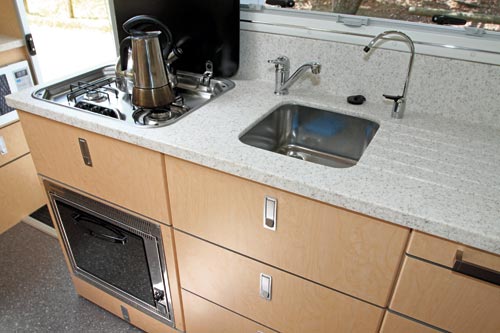 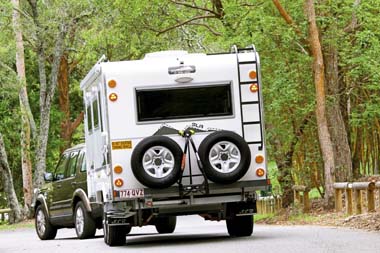 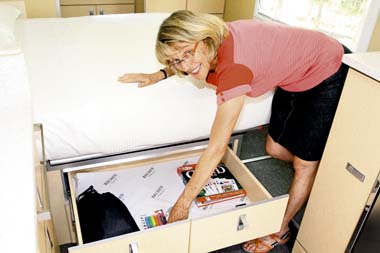 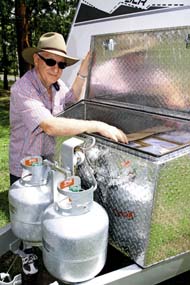 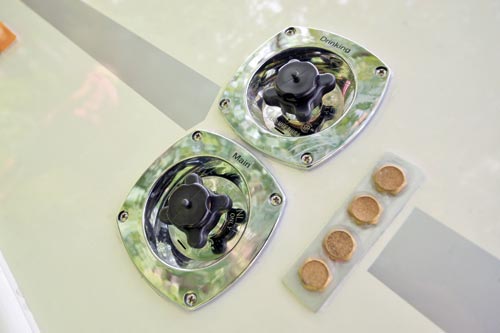 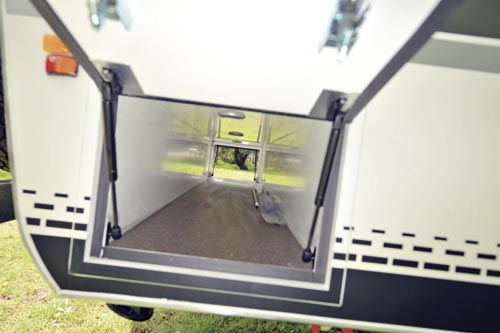 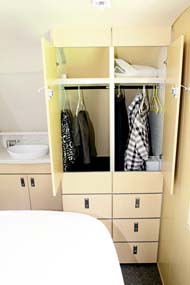 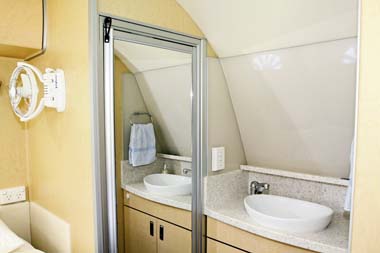 SLR’s one-piece galvanised steel construction means the chassis and frame are an integrated monocoque, creating a very rigid and tough structure. “We weld our chassis to the frame, and once we put our composite fibreglass panels on and it’s laminated, the product is unbelievably strong,” Warwick said. It’s all very impressive and should give you confidence when tackling the rough stuff that there’ll be minimal flex in the van. This also leads to a long service life, even if you’re offroad regularly.

From the outside, it looks a robust bit of kit, riding on tasteful factory Toyota steel wheels and competent offroad tyres, while its rear bumper, two spares and a roof ladder all suggest serious offroad intent. Up front is a Hitch-Ezy 360-degree offroad hitch, which both Warwick and the van’s owners, Rob Shrimpton and partner Jenny, describe as a fantastic piece of engineering. “It’s the best hitch we’ve ever used,” Warwick said of the 5t-capacity item. “It’s easy to use and beautifully Australian-made.”

Underneath, the van is a tough cookie, as you’d expect, with twin-axle Cruisemaster independent coil suspension and dual shock absorbers, plus plenty of bash plating. The overall Tare is 2740kg, and there’s a mammoth ATM of 4100kg. “We have a towing capacity of 3500kg with our Land Rover Discovery,” Rob said. “So with it fully packed and with full water, we can reach 3400-3500kg quite easily, so we’ll have to be careful how we pack.”

The two things that Warwick considers most important on this type of van are the power and water systems. “We’ve designed both of these to give the customer the ability to free camp for extended periods in remote locations,” he said.

The power system utilises four 6V sealed deep-cycle batteries to give an impressive 450Ah, while there are three 135W Kyocera solar panels. While this system alone should suit most applications, SLR has also fitted a Honda 2kVA generator as a back up or for when 12V power isn’t enough. And as is typical for such excursions, a Redarc BCDC charger always ensures a good charge from the towing Land Rover.

As for the water, SLR has designed a system that allows the user to individually select which tank to fill and draw from at the touch of a button, allowing you to isolate various water sources. This van features four 85L tanks for fresh water, with another 85L for grey water, but this is changeable, if required, to any combination of up to eight tanks!

“If you were running low on water and wanted to use our creek pumping kit to get water for showers, you can easily select the designated tank for filling, fill the tank, then go inside and switch to that tank for your shower,” Warwick explains. “You can then switch back to another tank for normal water consumption, but there’s also a totally separate drinking water system included to ensure a good supply of quality drinking water at the kitchen sink.”

Rob and Jenny were quite specific with their requirements for the inside of the van (see page 96), and the result is a well thought-out space, ideal for the kind of use they intend. It feels very open with the lounge and dinette, which is straight in front of the entry, a spacious place to relax, even though the van is not of the biggest size at 5.8m (19ft).

SLR has done away with any tall cupboards in the main living area and, combined with an under-bench rather than tall fridge, it feels remarkably open inside. The fridge-freezer is still of ample 150L size, and the benchtop above is very generous for food preparation or laying out art material as Jenny requested. The windows seem as large as possible too, so the space is filled with light and, when required, lots of air can be let in to circulate to make this a very comfortable living area.

The cabinetry seems top-notch, and has been imported from Germany so can be described as the Mercedes of the caravan furniture world with soft-close runners for the drawers and good quality compression latches. The benchtop is a solid surface hand-crafted by SLR, is heat and bacteria resistant, and looks and feels superb. A slide-out solid chopping board is a handy and well-hidden touch. There is a noticeable air of quality to everything in here, proving that, to some extent, you do get what you pay for.

The oven and cooktop are by no means large, but should suffice for two people. The same can be said of the shower/toilet combo and separate vanity, but Rob and Jenny were happy to compromise on this space to allow greater room for their living area. The bed features excellent storage underneath for Jenny’s large art papers and equipment.

As for luxuries, the lounge is both beautiful and comfortable, entertainment comes from a 22in HD LCD TV, DVD player, stereo, iPod dock and external hard drive, while there’s also a 3G internet and phone antennae, ideal for modern living while on long journeys. Lighting is LED throughout, while powerpoint and overall storage are decent for a 19ft van. I’m always reluctant to compare caravans to a decent hotel room, but this cabin comes pretty darn close.

Yes, it’s a van we’d probably all love to have, but only a few will be able to handle the price tag of $135,329 for this Premium as tested. Prices start at $115,589 for these SLR vans, and they are available in a number of layouts including as full ensuite models.

But, importantly, you can see where the money has been spent simply in the overall quality. Once out in the wilds, where this model should survive practically anything thrown at it, the value of such quality components and build will be made very apparent. Getting stuck out there with a broken van is no laughing matter.

It is a lot of money for a 19ft caravan, but this one feels like a ‘van for life’, for want of a better phrase. Rob and Jenny have designed things very specifically, and you instantly know they and SLR have got it right when you step inside.

It’s a beautiful living space, and very highly specced, and it makes plenty of sense foregoing a large bathroom area to enjoy relaxing in the roomy lounge and kitchen that feel wonderfully open. This is certainly a fine pick for an extended life on the road, no matter how bumpy that road becomes.

SLR Caravans was established 10 years ago. It was founded on the Gold Coast by Warwick Boswerger (right) and his two brothers, specialising in building rugged vans and expedition vehicles. These building skills have been passed down from their father, an engineer who creates numerous products as part of Bozchrome Industries.

Warwick appreciates the vans they produce are at the top end of the market price-wise, but is unwavering in his desire for a top quality product that is a true offroad proposition. “We want the best quality product as those doing remote expeditions really want the best,” Warwick said. “You can’t have a van break down in such places; our customers rely on good quality stuff and we put a lot of time and effort into the build, something the customers appreciate.”

SLR has a basic set of layouts available, but as with this van, things can be customised to suit a buyer’s needs. And such customers will typically be very knowledgeable, and most likely have owned caravans in the past, Warwick says. “A lot of our customers have had offroad vans before, and perhaps want something to reach more remote places that they’ll have confidence in. They’re the sort of buyers who know what they are looking for now.”