SOME ASSIGNMENTS WITH Caravan World appear to be fairly standard events. You know, collect a Royal Flair Aussiemate van from Arrow Caravans in Virginia, near Brisbane, have chat with proprietor Barry Barker, take the rig out for a shakedown, get some great shots and note down a few measurements and comments. No problem.
Well, that is mostly how these things work. But in this case, our choice of photo location meant the van happened to attract a small herd of very curious horses, all of whom stood around the entry door for a considerable period of time. I have no idea why they chose us, except that perhaps the Aussiemate looked a bit like a feed wagon.

ROUGH RIDING
This is no horse float, however. The Royal Flair looks much like a conventional Vic-made product, with an aluminium-clad body sitting on a hot-dipped galvanised chassis with tandem axles.
Of course, there is bit more to the Aussiemate than that. It's designed with rough roads in mind and comes with a 2in galvanised sheet-protected floor, and Control Rider coil spring independent suspension with shock absorbers. Beneath the aluminium cladding is a timber frame, with insulation in the walls and roof. The entry door is the familiar Camec triple-locker, and the windows are the Jupiter-style tinted hoppers.
A skirt of black checkerplate, as well as a pair of spare wheels at the rear, give the van a stylish look. At the business end, the extended drawbar features a Hyland 3500kg hitch, along with two 4kg gas cylinders, two jerry can holders and a large checkerplate storage bin, as well as a tunnel boot.
Something to be aware of with this particular van is its ball weight. Caused in part by the axles being set towards the rear, the weight on the ball is 310kg (empty), with a Tare of 2447kg. This is considerably more than the traditional 10 per cent, and should be kept in mind when choosing a tow vehicle or loading up for a trip.

PAIR OF SINGLES
Our Aussiemate featured a full-width rear bathroom and front bedroom, but came with fairly unique single beds. They may not be everyone's favourite, but single beds are often more practical in a caravan design, especially for people who have mobility problems. In addition, the wardrobe between the beds offers more storage. The overhead lockers are also easier to reach than those that would normally be above a double bed.
Measuring 1.88x0.79m (6ft 2in x 2ft 7in), the beds each have an innerspring mattress, LED reading light and powerpoint. Under-bed storage is accessed by floor hatches.
Despite the darker colours of the dominant cherry timber stain, the van's interior still manages to look quite bright, no doubt helped by the white marble laminate for the benchtops and splashbacks in the kitchen and bathroom.
Located along the offside wall, the kitchen bench comes with all of the usual suspects - stainless steel sink, four-burner cooktop/grill, three-way Dometic 175L fridge and LG microwave. Benchtop space isn't too bad, but washing up might be easier if the sink and drainer were the other way around.
Cupboard space, including a wire basket pantry, is quite generous and there are three drawers of various sizes. Two overhead lockers make up the rest of the kitchen storage, the third locker is dedicated for the electrics - 240V CBs, hot water switch, solar panel regulator, water gauges and water pump switches.
Sitting opposite the kitchen, the dinette has contoured cushions, a tri-fold table and LED reading lights. Three overhead lockers and two drawers underneath the seats supply the usual storage options.
Since the TV is located at the forward end of the kitchen overhead lockers, it can easily be seen from either the beds or the dinette. However, the person sitting in the forward dinette seat is going to have to sit sideways with their feet up, so a footrest instead of the drawer might be a preferred alternative. Two 100Ah deep-cycle batteries and associated charger are located under the rear seat.
The rear bathroom does take up a fair bit of real estate, but that means room for a large shower cubicle, Thetford cassette toilet and fairly elaborate vanity, complete with 'floating' basin, four cupboards, one drawer and two storage compartments. There is a vent fan above the shower, as well as small window in the wall above the loo.
Electrics are quite sophisticated, with LED and fluorescent lighting all-round, including external LED lights. Two solar panels keep the batteries up to charge when mains supply is not available, and the Anderson plug is standard. 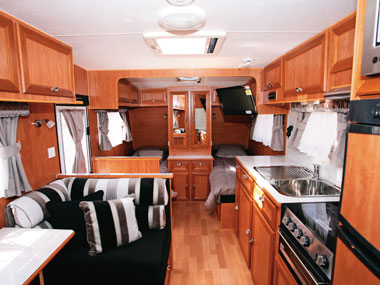 THE BOTTOM LINE
One thing was for sure on this test: we shut the gate very carefully when leaving our newl-found equine friends - we didn't want them following us all the way back to the Arrow dealership.
On a more serious note, Royal Flair caravans usually come with a certain look about them, one very indicative of the manufacturer's experience in areas of rougher travel, and the Aussiemate is no exception. This is no lightweight van, and it will require a larger tow vehicle.
This rough-road rig is fully-fitted with all the expected comforts for independent touring, and will be equally at home on smooth bitumen and unsealed tracks.