Enzo Gnocato is passionate about caravans. To build your own caravan in your spare time, you have to be. He’s also passionate about enjoying the great Aussie outdoors, so when he reached his limit after 12 years in the hospitality game, the decision to turn that passion into a living came naturally. But let’s backtrack a little…

Starting out as an apprentice cabinet maker, Enzo’s love of the outdoors was fuelled by a stint working at a camping and leisure chain, Ray’s Tent City, where he worked under Paul Golding. Remember that name– it’ll pop up later.

Down the track, and now married to wife Chrissy and with kids Tristan and Julia in tow, the family’s camping needs were changing. 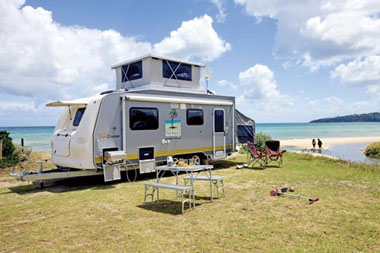 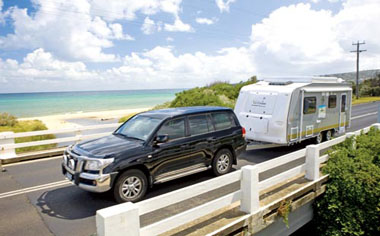 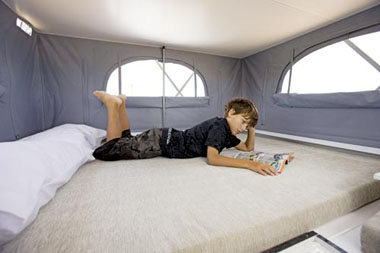 "In 2008 I built my own pop-top, which we used for 12 months," says Enzo. "Then we wanted something bigger, with a shower and toilet, so I began work on that. It was when I was ’glassing the roof that I thought, ‘What a massive area’. I started thinking about how good it would be to be able to move the roof up and down to give us even more space."

Enzo settled on four scissor lifts to hoist the roof section, and approached Tebbs Canvas in Dandenong, Vic, to produce the collapsible canvas walls. After successfully conquering the design challenges of the pop-up roof (and patenting it) another drop-down section at the rear came relatively easily– leaving Enzo with a six-berth van of fairly modest dimensions when under tow.

Enzo saw the potential of his design, and after bidding the hospitality world goodbye, he and Chrissy’s new company, Van Cruiser, was born.

"I couldn’t get the finish I wanted at home and I didn’t want to take a van to caravan shows unless it was of the highest quality," says Enzo. "So I rang up Paul Golding– now general manager at Nova Caravans. I showed Paul my concept, and the rest is history."

Dubbed The Resort, this first Van Cruiser model is one of three: there’s also the Beretta, a four-berth pop-top, and the soon-to-be-released Picolo– a super-compact RV Enzo describes as "a totally new concept in budget-priced touring".

NEW FACES
When I dropped by Van Cruiser’s new retail premises in Melbourne’s south-east, it was a hive of activity. Enzo explained that the spacious outlet, due to open in February, won’t just showcase The Resort, but also a wide range of camper trailers and tents, and myriad camping accessories.

CW inspected The Resort on Vic’s Mornington Peninsula. Designed by Enzo and built by Nova, it’s a truly impressive caravan, especially with its roof-top and rear ‘expander’ sections in place.

The exterior is smart and classy, with a moulded fibreglass front section flowing into 3mm aluminium composite walls with 19mm-thick foam insulation. Apart from its excellent insulation properties, Enzo says these walls actually make The Resort one of the most rigid vans on the market.

The chassis is by Preston Chassis and it rolls on a double axle with roller-rocker suspension. Enzo points out that other suspension options are available, and that, within reason, just about any aspect of the van can be altered to suit the customer’s wishes.

Outdoor living is well catered for, with a slide-out Swift barbecue, 30L Waeco drawer fridge and a Dometic awning. But it’s inside where your jaw will really hit the floor.

Stepping inside, you enter a wonderfully comfortable, inviting space– a space with Nova Caravans’ signature style written all over it. Quality two-tone cabinetry is complemented by stylish alloy pushbuttons and handles, and the mixture of curved overhead lockers with traditional flat-faced cupboards and drawers, plus magazine racks and feature rails, lends a real touch of class. This is only enhanced by smart LED downlights and a choice of simple but modern fabrics.

There are plenty of luxury features, too, like the rear washing machine, the Waeco wine cooler and a coffee machine, while the convenience of your own shower and toilet can never be underestimated.

Air-conditioning is provided, and the kitchen features all the mod cons, including a sizeable 150L fridge/freezer. There’s plenty of natural light, and, at 6ft 2in (1.88m), I loved the high ceiling.

I also liked the forward bed/mid kitchen/rear dinette layout, and although the living area would be a squeeze at meal time with each of its berths spoken for, it’s still a stunning space in a package with an external body length of just over 6m (19ft 8in). However, we’re still talking large 4WD tow vehicle territory, because there’s a lot packed into The Resort’s dimensions, leading to an ATM of 2818kg

ROOM TO GROW
Enzo and Chrissy showed me how the two expander sections can be set up in just a few minutes. The bedding in each can remain made up – simply fold the sections up (or out) and you’re ready to hit the sack. Also of note is the fact the roof and rear sections can be retro-fitted – you can buy The Resort as a two-berth, and then add the roof or rear sections as your family grows. Clever.

Enzo says the expander sections’ seals keep water at bay when under tow and customers can choose from solid ‘blockout’ walls or mesh screens, depending on their needs.

The roof section, accessible by a very neat collapsible ladder, is huge. At 2.15x1.6m (7ft x 5ft 3in), it’ll sleep two fairly tall adults or a few kids– although whether the littlies would get over the excitement of the loft-style accommodation and actually get to sleep is open to debate! There’s a power outlet and LED lighting up there, too.

The rear expander folds down to reveal a double bed. It’s accessible only by climbing over the rear dinette and through the decent-sized hatch– if the grandparents are visiting and mobility is an issue, then they’ll likely sleep in the main queen-size bed. When stowed, the expander units don’t intrude upon the living space of the van. This means you only need set them up when you require the extra beds, adding yet another element of convenience.

THE BOTTOM LINE
I’ve raved about several models from Nova Caravans before, and so The Resort’s apparent quality of finish and construction came as no surprise. Combined with Enzo’s unique design and expander sections, The Resort is just as innovative as it is inviting. The model we looked at is priced at $74,990 (tow-away), which includes everything bar an ice machine.

For such a unique, stylish and feature-packed van, and for one allowing such a flexible approach to caravanning in general, I feel that’s not a big ask.

Welcome, Van Cruiser – CW can’t wait to see what else you have in store… - Words Rod Chapman; Pics Ellen Dewar.