It’s not always easy to get our hands on a Regent caravan by Lifestyle Caravans, so when Aidan Saggers, proprietor of 7th Street Caravans, said he had one on site, we made haste.

The Regent Brentwood in question, an SE model, was a custom-ordered rig geared for entertaining.

With an ATM of 3170kg and a length of 7.32m (24ft), it’s neither light nor small, giving the designer considerable latitude with the interior layout. The general design is rather standard, with a front bedroom, full-width rear bathroom, nearside kitchen bench and offside dinette. The dinette and bathroom, though, are particularly spacious. A few goodies in the long kitchen benchtop and a large 240L fridge don’t go astray, either. Although the cabinetry work has the de rigueur timber look (in this case called "Wild Wood") it’s nicely offset by a few classy touches like the black leather seating, glass lead-lined locker doors, brushed silver splashbacks and wider cupboard handles (which weren’t fitted for the photos, unfortunately). Lighting is a mixture of fluorescent and halogen fittings, which include downlights. 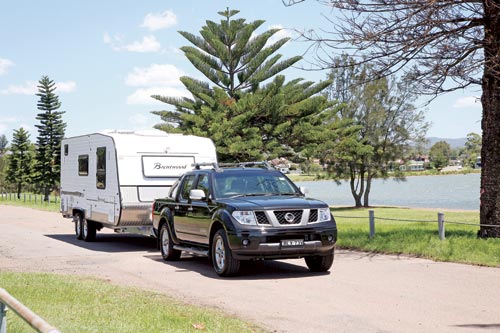 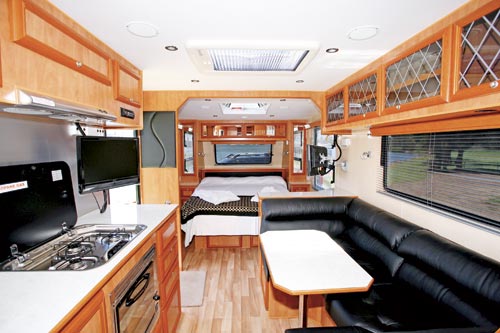 Ventilation is handled in many ways: a Four Seasons hatch above the bed, Seitz marine-style amidships, two fan hatches in the bathroom, and the tinted hopper windows throughout. When all else fails, the roof-mounted Aircommand Ibis comes in handy.

LARGER INTERIOR
The kitchen bench is one of the main features of this Brentwood van. It has the usual items like the three-burner Smev cooktop with separate grill/oven, a stainless steel sink with drainer and microwave set above, with a considerable amount of cupboard and drawer storage area.

One of the drawers isn’t actually a drawer; rather, it’s a slide-out ironing board. Where the sink is, the bench butts against the bathroom wall. It’s angled to provide a little extra storage and is easy on the eye.

At the forward end of the bench is a flatscreen TV attached to a swivel arm; a battery of light switches and a double powerpoint on the wall; and an AM/FM radio/DVD player in the overhead lockers. Opposite, a three-quarter-height, wire-basket slide-out pantry is hidden in a cupboard next to the fridge, between the bathroom and the dinette.

The stretched-out, U-shaped dinette comfortably seats two people, with views to the outside. One person could even put their feet up! Drawers are fitted to both sides of the dinette and the front storage area has an external door as well, mainly for getting to the two deep-cycle batteries stored there.

There’s extra storage in the lockers above. The forward one contains the solar panel regulator and the 12V fuses– a nice change from hiding them in the boot.

In the bedroom, there are windows all round and mirrors on all the bedhead cupboard doors, which surround the innerspring mattress bed. In addition to the usual overhead lockers and side wardrobes, the bedhead has a rear shelf, supplementing the bedside cabinet shelves. Measuring 1.85x1.52m (6ft 1in x 5ft), the bed has a metal-framed posture slatted base. There’s ample storage space under the bed, even with the spare wheel and Waeco drinks fridge stored here.

Towards the front of the bedroom, opposite the bed, you’ll notice the full-height diagonal cupboard with a mirrored door in the nearside corner, and cupboards behind the dinette on the offside. The latter are somewhat awkward to get at because of the bed.

As mentioned, the bathroom is quite spacious. With a depth of 1.32m (4ft 4in), it has a capacious shower cubicle finished with Ceramerlite and a variable-height shower head. The rest of the rear wall is occupied by a deep cabinet with a washbasin and several cupboards (one with hanging space), a large window in lieu of a mirror, and recessed lockers above. The window provides a cross-breeze and a large mirror is on the inside of one of the cupboard doors instead. There is a hot-water switch and 240V powerpoint above the sink. The area under the washbasin is taken up by a cupboard and a Dometic front-loading washing machine.

RIDING HIGH
The Brentwood is built along conventional lines. The G&amp;S SupaGal chassis rides on tandem axles fitted with alloy wheels and Simplicity independent suspension. Above, the body has a meranti timber frame and insulation that is covered on the outside by aluminium cladding. Two 9kg gas cylinders ride on the front drawbar, just in front of a handy carrying rack between the rails.

External storage consists of the front boot, a front offside bin suitable for a generator, the aforementioned battery hatch and a mid-nearside entertainment unit that contains a swivel arm for a TV, powerpoint and TV antenna connection. Other features for outdoor entertaining include the Dometic awning, three wall lights, two external speakers, a fold-down table and at the front, a slide-out barbecue.

THE BOTTOM LINE
Customers who ordered this Brentwood definitely knew what they wanted in a van, having owned several previously. Towing weight wasn’t an issue and that’s reflected in the size and the layout of the van.

Although it’s not an offroad van, this Brentwood can be easily used for free camping – it already has batteries and solar panels and provision for a generator. It also has just about everything for carefree caravanning around this great country.

For more information, including your nearest dealer, phone (03) 9408 7400, or visit www.regentcaravans.com.au.

As featured in the March 2010 edition of Caravan World issue 476. Words and pics, Malcolm Street.