There’s not much doubt that the grey nomads, aka those retirees who are doing the Big One, have done much to change the general expectation of the general fit-out of a caravan, and over the last five years in particular the appointment level on up-market caravans has increased considerably.

That is certainly the case with Regal caravans that I have seen coming from the Queensland Regal Caravans sales premises, and QRC’s Ryan Hodges reckons that it’s a good market niche to be working in given his sales figures.

Our review Regal is a case in point. A Pathfinder model, it has a considerable amount of inclusions over the standard specification. With a body length of 6.3m (20ft 8in), it comes with front bedroom area and nearside dinette but not with a full-width rear bathroom, which seems to be de rigueur these days. Instead there’s a slightly larger than usual offside corner bathroom and a split kitchen across the rear wall and along the offside wall – a layout pitched at those who desire on-board facilities that don’t take up too much space. 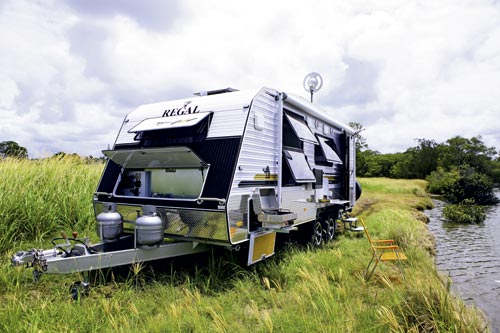 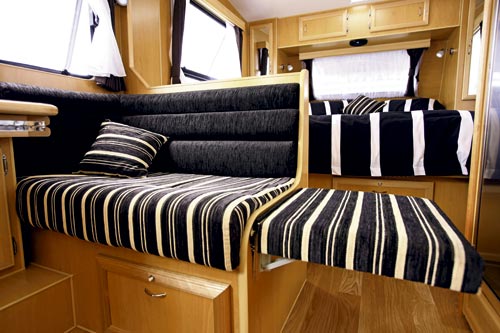 With thoughts of rough road travel in mind, the Pathfinder has a 150x50mm (6x2in) chassis, with the drawbar rails running back to the front suspension mounts. Simplicity load sharing tandem axle suspension takes care of the rough or the smooth and a Hyland 3500kg hitch keeps everything hooked up.

For long hauls, there are three 80L water tanks fitted between the chassis rails. Two 16in alloy spares are mounted on the rear bumper bar. They are slightly offset to accommodate the checkerplate alloy generator box fitted to the offside end of the bumper bar (the generator box was not fitted for our test, but it is a standard item).

Atop the chassis, the bodywork with timber frame, aluminium cladding and tinted hopper windows is fairly standard but the external appointments are not. Someone at Qld Regal obviously likes external lights – not that I am complaining. There are three fluoro fittings on the nearside wall, one on the rear wall and two on the offside wall. This might sound like overkill but is a good thing for those who spend much time outside.

In addition to the extra illumination, there are the usual things like front boot storage, LED running lights, front tunnel boot, picnic table and external entertainment unit with TV fitting. There are other goodies too, such as the slide-out barbecue, Saturn auto TV antenna and reversing camera.

Dinette styles and designs have come a long way since the norm was flat cushions and a square table that folded down into a bed. The Pathfinder’s, although staying with the traditional style, has several features that represent modern trends: seat backs that continue around the wall, hinged footrests that are a good alternative when there is no separate lounge seat, a bi-fold table that is definitely multi-functional, drawers under the seats that open into the seating area rather than the walk space, and a small cupboard under the table.

As mentioned, the kitchen is divided, with the rear-wall bench consisting of a stainless steel sink with drainer alongside a four-burner cooktop/grill/oven. Also squeezed in are two cupboards, a floor locker, a cutlery drawer and three overhead lockers, and a slide-out cutting board above the cutlery drawer.

A little differently, there is also a bench-level cupboard space between the shower cubicle and the rear wall – an interesting feature but it does have air space that is hard to utilise. The lower area is occupied by an external shower, hot water heater and a small external storage bin.

Making up the rest of the kitchen is the mid-offside cabinet that contains the 230L fridge, and the LG microwave fitted into the overhead locker area at eye height.

For storage there’s a cupboard above the fridge plus two pots and pans-sized drawers and two cupboards underneath the benchtop.

This area also happens to be the technology centre. In addition to the swivel arm-mounted flatscreen TV, there a radio/DVD player, 240V powerpoint, 12V socket, TV antenna connection, hot water switch, solar panel regulator and water tank gauges – all very centrally located. All the 12V technology in the Pathfinder is supplied by two batteries that are charged by two 130W solar panels.

The innerspring mattress bed, surrounded by windows and looking very striking with its black-and-white striped bed cover, measures 1.85x1.55m. A little surprisingly it has a simple ply timber bed base rather than the more exotic posture slats that seem to be a standard feature these days.

Bedroom storage space isn’t an issue with a bedhead of overhead lockers, side wardrobes and bedside cabinets plus reasonable-size diagonal cupboards in the corners at the foot of the bed. A little differently, the lower cupboards have hinged lids for access, in addition to the normal door. The lower nearside cabinet is also the compartment for the external entertainment unit, which includes the TV swivel arm.

The corner bathroom has a bit more than the usual space for such a design, and includes a Thetford bench-style cassette toilet, flex-hose shower which is common also to the washbasin, and a reasonably sized wall mirror. Ventilation is supplied by both a fan hatch and small window. Towel rails are fitted to the door.

Naturally, all the goodies add weight which means our Regal Pathfinder comes in with a Tare of 2350kg and an ATM of 2950kg. This puts it in mid sized 4WD driving territory – which of course is what it has been designed for: the long haul in some of Australia’s remoter places, all in comfort and style. Words and pics Malcolm Street

For more information, and to find your nearest dealer, visit the website, www.regalcaravans.com.au.