THE SAYING "WHAT goes around, comes around” has various meanings, but it crossed my mind as I looked over the new Explorer XL from Paradise Caravans.
The reason? The 7.31m (24ft) van has not one but two doors. Older readers might well remember the caravanning days of the ’70s when the original Viscount and Millard companies were king and when large, two-door caravans were not uncommon, only to virtually disappear.
LINK: Visit the RV Tests Archive
Well, according to Bill Creswick from Brisbane-based Lifestyle RV’s, they’re back! “The two-door Explorer XL was something we developed in conjunction with Paradise Caravans and there has been considerable buyer interest,” he told me. “Indeed we are trying to get other manufacturers interested as well.”
When looking over the Paradise Explorer, I briefly pondered the pluses and minuses of two doors. The minuses are that there is some interior space lost (though in larger vans that isn’t such an issue), and from a security point of view there are two doors to be locked instead of one. Pluses are easier access and safety, with two exits instead of one in an emergency.
CONSTRUCTION
Apart from the two doors, the Explorer is built in a conventional manner. Given that it is a large van, it’s built on a DuraGal double-rail chassis with a 150x50mm (6x2in) drawbar. It rides on leaf-spring suspension that’s fitted with shock absorbers and 16in wheels but can be optioned up with a Simplicity load-sharing setup.
Conventional also are the gal sheet-protected 80L water tanks fitted towards the front, but not so the two 100Ah deep-cycle batteries, which are mounted on the offside chassis rail under the van. Mechanically protected, of course, by aluminium checkerplate, they are a tad awkward to get at.
Both the drawbar and rear bumper are very busy places. In addition to the usual drawbar items like ball coupling, jockey wheel, hand brake and pair of 9kg gas cylinders, there are also a mains tap, checkerplate aluminium storage bin and two jerry can holders. At the rear, there are two spare wheels and two more jerry can holders.
Above the chassis, the Explorer has a timber frame with insulation and aluminium cladding. Seitz hopper windows are fitted all round and both doors are the Camec triple-locker variety. There isn’t a conventional front boot but a right-through tunnel boot – except that it isn’t quite right-through because an all-important slide-out barbecue is fitted to the nearside. Oddly, the gas bayonet connection is underneath the van.
Mid-van there’s a hinged picnic table but that might be better located next to the barbecue. Both doors have electric steps and the awning is also electrically controlled.
INTERIOR
Inside, the Explorer layout can be neatly divided into three areas – front bedroom, mid-section kitchen/dining/lounge and rear bathroom. The front door accesses the kitchen/dining area and the rear door accesses the bathroom. A concertina door can be used to close off the bedroom from the rest of the van and the bathroom has a sliding door.
Décor is very much the darker timber look with leather-upholstered lounge, and all the windows have integrated blinds and insect screens, as well as slimline venetian blinds.
As you might imagine, the bathroom in a van like this – with its own entry door – is quite spacious. A shower cubicle sits in the rear offside corner with the Dometic cassette toilet between that and the front wall. Fitted into the rear nearside corner is quite a comprehensive vanity cabinet with a washbasin, under-bench washing machine and a vast array of cupboards and drawers. Ventilation is handled by a Four Seasons hatch, two fan hatches and a window above the loo. I understand that an alternative layout has the washing machine and toilet positions reversed.
In keeping with the rest of the van, the kitchen bench is substantive too. Naturally there’s a four-burner cooktop, grill and oven complete with flush top and a stainless steel sink with drainer and filtered drinking water. Above the sink is the microwave – at a lower height than the overhead lockers above. Given the length of the bench, there’s a fair bit of benchtop area and a considerable amount of overhead locker, cupboard and drawer storage space.
Opposite the kitchen bench is the large Dometic 225L fridge, set right in the corner. It’s mounted off the floor at a user-friendly height. Alongside the fridge is a leather-upholstered, club-style lounge. It will seat two in comfort and has the usual overhead lockers as well as under-seat storage area.
Up front, the queen-size, innerspring mattress bed is surrounded by windows. It also has a bedhead of overhead lockers, side wardrobes and bedside cabinets. Fitted into each corner at the foot of the bed are small, ceiling-height diagonal cupboards. Fitted into the ceiling are a Four Seasons hatch and speakers for the sound system.
Twelve-volt halogen lights – ceiling bubble-style and reading lights – are used throughout the Explorer with a substantial number of fittings. A 19in flatscreen TV and AM/FM radio/DVD player are mounted at the door end of the kitchen bench. Powerpoints are fitted in all the logical places, including at the back of the club lounge. Solar panels are not fitted but the van is pre-wired to accept a 130W panel.
With a considerable number of features, it not surprising that the Explorer is a relatively heavy van. With a Tare of 2660kg and an ATM of 3060kg, a large 4WD vehicle will be needed for towing. I have to say that on our drive behind the Land Rover Discovery, the van behaved very well.
THE BOTTOM LINE
A two-door caravan is certainly a little different, and it’s not hard to see how the convenience of a second entry door would appeal to some travellers or those who live in a van semi-permanently. In addition, the Explorer XL has a very solid chassis and is a well-appointed van with just about every RV accessory fitted. 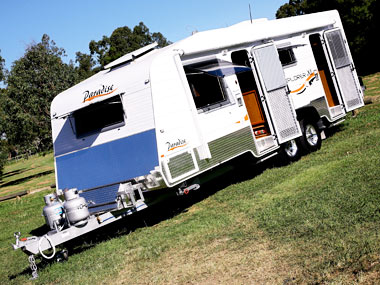 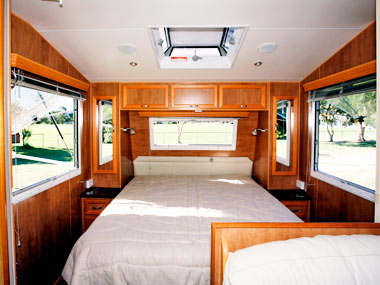