Caravans come to CW’s attention for all kinds of reasons. Those reasons can be complex or incredibly simple, like – in the case of the latter – when a caravan offers something a little different to the norm. And when you’re at a major caravan expo, like the Sydney Supershow, picking out a distinctive van is perhaps a little easier, as they stand out among the rows and rows of more traditional caravans.

As I perused the many offerings at the Supershow, the new Majestic Tiara, on the Parravans stand, was an excellent case in point. I’m fairly familiar with the Majestic range but the new Tiara, with its fibreglass moulded front and rear ends, caught my attention. It wasn’t just an external makeover, either – the internal layout was also a little different. Not only for the obviously darker hues of the cabinetry, but also for what this particular layout was not.

Once vans get over a certain length, a full-width rear bathroom/front bedroom layout seems to become de rigueur. This particular Tiara layout does have quite a large bathroom area but it is mid van, next to the bedroom. That has the effect of reducing the open area of the van, but I know there are some vanners who like to have the bedroom partitioned from the rest of the layout. That has been achieved here, with a rear bench kitchen plus a lounge and dining area in the rear of the van, and the bedroom and bathroom in the front. 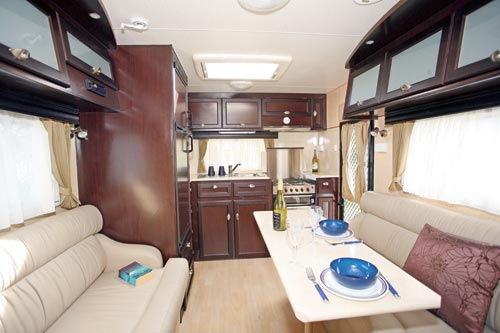 Within the confined perimeters of any RV, for reasons of space perception it’s often good practice to stick to lighter colours. In the case of the Tiara, the ‘walnut’ shade of the timber stain is limited to the cabinets, and offset by the beige tones of just about everything else, including the leather upholstery.

Adding to the effect are the overhead lockers above the lounge and dinette, which are angled back and have glass doors. All the windows have full and quite heavy net curtains. Marine-style hatches front and rear provide light and ventilation. The 12V lighting is a mixture of fluorescent and halogen.

Starting in the middle, the bathroom is actually split, with the shower cubicle being on the nearside of the van and the toilet and vanity cabinet being on the offside, leaving a walkway in the middle. Sliding doors on either side of the bathroom give privacy when needed. The Thetford toilet is a new model with a ceramic bowl and electric flush. Beside it, the vanity cabinet has quite a contemporary look, with a wall mirror, storage space above and below and a washbasin that sits above bench level.

Up front, the posture slat bed base has a 1.88x1.52m (6ft 2in x 5ft) mattress above and a substantial storage space below. Naturally the bed also comes with a bedhead of overhead lockers, mirrored side wardrobes and bedside cabinets. Of note is the slightly larger than usual width of the bed shelf. Off each foot of the bed are the usual diagonal corner cupboards, the nearside being full height and the offside being half height to accommodate the wall-mounted, flatscreen TV.

A compromise in many vans is that you either get a dinette or a lounge but not both. Given the 7.49m (24ft 7in) of this Tiara and by squeezing the kitchen area a bit, the van comes with both an L-shaped dinette and a two-person lounge – so there’s room for a couple of people to relax and put their feet up.

This then leads to the issue of where to put the TV. Our review van had a mounting point (complete with connections) in the corner on the kitchen bench side of the fridge. However, I was assured that it’s moveable and better viewing places (although not the most practical) might be on the lounge side of the fridge, or in the nearside corner above the cooktop (not necessarily good from a steam and electronics point of view). While on entertainment, the AM/FM radio/DVD player is fitted in the overhead lockers above the lounge.

Fitted across the rear wall, the kitchen bench comes complete with a stainless steel sink/drainer and Swift cooktop/grill/oven. In the space between the offside located fridge and the rear bench, a microwave oven is squeezed into the overhead locker space. That also allows for four small drawers underneath the benchtop.

Actually this kitchen does have plenty of drawer space, with two large ones under the off-the-floor 186L fridge, a cutlery drawer and another two under and beside the oven. All the drawers had metal sides, thus giving strength while keeping the weight in check. Two cupboards are under the sink and a small wire basket slide-out fills the space next to the doorway. The offside corner space, often a bit of a dead spot being hard to get to, has a large hinge hatch with a wire basket fitted underneath. Under that is just open space.

Apart from the aforementioned moulded ends, the Tiara is built in a fairly conventional way. The body has a timber frame with aluminium cladding for the walls and roof. Windows are Seitz hoppers (quite large in some cases) and the door is a security Camec. Nearside ‘lifestyle’ fittings include the Dometic awning, a picnic table, an entertainment unit and three external lights.

The fibreglass ends are not only decorative. Both have window stone guards that match the rest of the moulding and the front one not only incorporates the front boot but also a separate gas cylinder storage, which is open underneath and therefore well vented. The boot interior has its own light and the house battery sits in the offside corner.

At the rear the moulding incorporates the taillights and fits around the bumper bar, which is fitted with a spare wheel. It’s certainly an interesting look and it gives the impression that the van is longer than usual, but in reality it’s not much longer than a conventional spare wheel/bumper bar arrangement. A rear view camera was also present on our test van.

Underpinning all this is a standard 150x50mm SuperGal chassis, with the drawbar forming a double rail back to the suspension mounts, where you’ll find load-sharing, twin-axle leaf springs. Al-Ko ‘quick drop’ corner stabilisers are also provided.

With a length of 7.49m (24ft 7in) and a ATM of 2711kg, the Tiara isn’t a particularly small van, but as a towing proposition behind our Toyota LandCruiser it was certainly well behaved, with the axles mounted far enough back so there weren’t any issues of stability.

As an upmarket addition to the Majestic range, the Tiara certainly has a different look to it, as well as being a very well appointed van. Offering an alternative to a full-width rear bathroom design certainly won’t harm the Tiara’s appeal, either. Who’s the Tiara going to suit? Apart from a family, just about anyone who desires some caravanning ‘comforts’, and has some long-haul travel in mind.