The quiet calmness of Australia’s outback. Unravelling colours: orange and red dirt; yellow and green spinifex. Not a ’roo or emu to be seen– recent rains kept them well away from the Stuart, with ample food available in the scrub.

Between us and Alice Springs was the highway. Lots of it. In Adelaide, we hitched our test van, a Cross Pack-fitted Concept Ascot S9, to our 200 Series LandCruiser Sahara. And our comprehensive test of one of Concept’s latest models began.

OUTBACK TESTED
The Ascot S9 (layout designation: 21ft x 7ft 9in Washer) tracked steady and true on the open highway. Towed at a sensible speed (90-100km/h) with minimal crosswinds, the Ascot S9 kept a straight line, even when passing some of the larger road trains. The 360km or so between Adelaide and Port Augusta, though, was necessarily a slower tow – 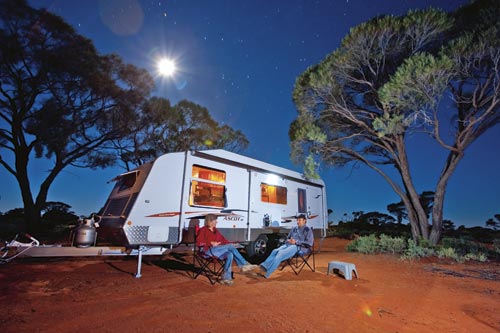 it would’ve been foolhardy to travel at anything above 80km/h with the crosswinds we were up against.

The rocker-roller suspension, fitted with shock absorbers, did a good job of maintaining the van’s footprint on the road, especially over some of the Red Centre’s nastier corrugations. Looking for a challenge– wanting to really test it– we took the red track near the base of the Olgas (Kata Tjuta) that is the start of the Great Central Road. Dusty? Yes. Corrugated? You bet.

At walking pace, the rig did rattle but not so badly that I felt compelled to stop or speed up. Keen to see some red dust clouds and how the rig would handle ‘gliding’ over the corrugations, I eased down the accelerator. And it wasn’t just the scenery that made me then smile. A wheel hubcap shook loose and a window catch popped open, but that’s the sort of easily-fixed stuff you expect on a shakedown. What matters is that the Ascot S9 ate those bumps for breakfast. Back on the bitumen, we checked inside. Nothing was out of place. Granted, our test was over and above what the factory designed the van for, but as you can see, it’s a versatile setup.

INSIDE
The queen-size bed lifts on gas struts to reveal compartmentalised storage beneath. The bed itself measures 1.95x1.52m. There are wardrobes either side, three overhead lockers, and bedside tables with drawers and external hatch access. There’s also a mirrored cupboard with four shelves on the nearside, as well as a nearside cupboard at the foot of the bed. Overall, the bedroom is well set-up with good storage and bed walk-around space.

The internal height of the Ascot S9 is a very reasonable 1.97m (minus about 60mm for the Dometic air-conditioner), which tapers to 1.64m where the ceiling meets the lockers above the bed.

Among the features of the kitchen is a full splashback with a difference: it extends about 50mm behind the overhead lockers. This setup prevents grit and dust from collecting either behind the splashback or in the space between it and the lockers.

There’s an articulated arm for mounting a flatscreen TV at the forward end of the bench. The 12V Shurflo water pump is in the cupboard near the foot of the bed. The powerpoint for the 186L three-way fridge/freezer is in the floor-level locker next to the fridge. Just as we were about to give up on our hopes of cold beer and chilled wine, I found the powerpoint and the Dometic cooled our beverages in short order.

An LG microwave is recessed above the fridge, the power cable feeding neatly to the powerpoint in the adjacent locker.

The kitchen also features a JVC CD/DVD/MP3 player connected to a couple of DNA speakers (a Winegard aerial is included, too), plenty of storage options, and a Spinflo cooktop (three gas burners, one electric) with grill and oven.

I ran my finger over each and every edge, both inside and outside of the Ascot’s cupboards, and found them all to be well finished. I pulled and put downward pressure on the cupboard doors, and everything stayed in place. For a van that’s designed for off-bitumen work, as this one is with the Cross Pack fitted, the strength of the cabinetry is just as important as that of the chassis, suspension, etc. And in this respect, our test van lived up to its promise.

Opposite the kitchen, the leather-upholstered, L-shaped dinette would seat up to four. Some dinettes are limiting– there might be seating for four, but because of a fixed table, the body shape/size of an individual, the position of the wheelbox, etc., means only two could use it. The table of the Ascot S9’s, however, slides on an east-west, north-south axis, so whatever your needs, you’re covered. The table also lowers in a ‘scissoring’ action, the single leg becoming two support legs, to form the base of an additional bed. The storage options in this area are very good, with an array of overhead lockers and hatch access to the cavity at the ‘base’ of the "L" (the wheelbox occupies the ‘stem’).

On the topic of storage, our van’s layout came with four cupboards, each with three shelves, in the entryway.

The full-width rear bathroom has the full kit: nearside shower, mid section vanity, top-loading Lemair washing machine in the offside corner, with a Thetford cassette toilet just forward of that. Storage in the bathroom is fine, and it was good to see towel holders hadn’t been forgotten.

A point about the shower door: it’s held shut by a magnetic catch that on test did its job well. I’ve hauled ‘offroad’ vans over serious corrugations before, only to find the shower door swinging freely afterwards. And the sliding bathroom-entry door is held in place by solid vertical sliding bolts– nothing puny about them.

Lighting throughout comprises eight downlights, a couple of halogen spotlights at the bed and one at the dinette, a light under the stainless steel rangehood, and, of course, a hatch for daytime illumination.

OUTSIDE
The Concept Ascot S9 cut a striking figure behind our ’Cruiser. On the black highway or in the red dirt, it looked the part. Features include a full-length Dometic awning, two DNA speakers connected to the sound system inside, a drop-down picnic table (fantastic for snacks when free-camping overnight), and a rear bumper that sports the spare tyre and a couple of jerry can holders. The bumper is held in place by U-bolts that have been welded to chassis cross-members.

The gal-lined front boot, home to the battery, charger and the BreakSafe unit, was large enough to store our camping chairs and other bits and pieces. The drawbar sports two 9kg gas cylinders, steel mesh, and a centre-mounted jockey wheel. As for stone protection, our van had 300mm-high checkerplate along both sides– at the front, it extends about halfway up. Underneath, the two water tanks (one mounted between the axles, the other slightly forward of the front axle) are protected by galvanised sheeting, but I’d like to see some protection for the PVC plumbing.

Everything looks neatly finished underneath, with the hot and cold lines, etc., well sealed where they enter the floor.

THE BOTTOM LINE
When testing a caravan, there are a couple of unscientific questions that I ask myself: could I live in this van, and could I confidently take it wherever I wanted to go (within reason)? Well, we towed it about 3600km, from Adelaide to Alice Springs and back, with a significant detour along the Lasseter Highway to check out Ayers Rock (Uluru), the Olgas and more. It followed us willingly off the highway as we searched for the best free-camps, and side-sway under tow was negligible and nothing that a quick tap of the electric brakes’ manual override button couldn’t sort out.

Yep. I could live in it. And I know from genuine experience that it would follow me wherever I wanted to go.