PSST, WANT TO KNOW a little secret? In Qld, up Noosa way, there's a small but well-established manufacturer of custom-built caravans. Want more? On the northern side of the Noosa River, away from the hurly burly of Noosa Heads, there's a pleasant little place known as the Noosa North Shore, which includes a beachfront campground, with vehicle access to the beach itself.
Outback RVs is the aforementioned caravan manufacturer, run by Max and Janelle Freeman. They specialise in designing vans for the Australian outback and when one of their latest Overlander models became available, I decided it was time for that trip to the Noosa North Shore.

READY TO WORK
The Overlander is geared for some serious offroad work, and that starts with the tandem axles fitted with Cruisemaster leaf spring, trailing arm, and shock absorber independent suspension. It's built on a two tier, hot-dipped galvanised chassis: the lower half with 6in x 2in rails, from the Hitchmaster DO35 hitch to behind the rear suspension mounts; the upper half a 4in x 2in box section frame that forms the base for the main body.
Galvanised sheeting above the chassis gives protection from stone damage, as well as dust and water. Located between the rails, the three 85L polyethylene water tanks are out of the way, but don't require any mechanical protection.
Up front, two 9kg gas cylinders, stoneguard, Trail-A-Mate jack and a mesh rack adorn the drawbar. Two spare wheels are mounted on the rear bumper.
Above the chassis, the fully-welded aluminium frame supports insulated walls and roof, which are covered by aluminium cladding. A waist of aluminium checkerplate all-round not only looks good, but also provides stone protection.
Also included in the body design is a front boot with a tunnel right behind, along with a chamfered rear to give a good departure angle. Running lights are all LEDs.
In a nice change from the seemingly ubiquitous front bedroom/rear bathroom layout, my Overlander came with a front lounge/kitchen and rear bedroom with split bathroom in between. The downside of this layout is that the bulky bathroom features are in the middle of the van - but those who don't mind a slight squeeze won't have a problem.
Tas oak is used for all cabinetry and some of the wall covering. This means the timber look is quite dominant, but the day is saved by good windows and large marine-style hatches front and back.

LIVING AND RELAXING
Taking up all of the front of the van, the leather club lounge has been designed with dining and relaxing in mind. The gloss-finished table isn't particularly large, but certainly adequate for two people. The wide shelf along the front wall is a nice touch. Scenery watchers might miss a front window, however. The drawer underneath the nearside seat is handy.
In this layout, not only is the bathroom split, but also the kitchen, with benches on both sides. It's a design that meshes particularly well with the dining area.
A three-burner cooktop is fitted into the nearside, leaving room for adjoining bench space and six drawers underneath. Two overhead lockers fit above and a flatscreen TV, visible from the front lounge, is mounted on the adjacent wall.
Making up the rest of the kitchen, the bench on the opposite side comes with a stainless steel sink avec drainer, but there are just three drawers underneath and a two-shelf cupboard. The wine glass rack tucked under the overhead lockers is a nice touch.
The cabinet alongside the kitchen bench is home to a 240L Vitrifrigo fridge, with a Sanyo microwave above. Water tank gauge, AM/FM radio/CD player and battery voltmeter are fitted into the panel above the microwave. A slight problem with the radio is that MP3 devices have to be located a fair way from the 3.5mm socket.
Not everybody likes them, but I don't mind a split bathroom. It can be a small space-saver and gives some more flexibility of use. The nearside shower cubicle features a flexible-hose shower and fan hatch, plus a towel rail on the door. On the opposite side, the other cubicle comes with a Dometic cassette toilet, corner washbasin and shaving cabinet with separate light and fan hatch.
Bringing up the rear, the bedroom is quite conventional in most respects. The 1.9x1.54m (6ft 3in x 5ft) innerspring mattress has the usual surround of wardrobes, overhead lockers and bedside cabinets. The mattress can be lifted to reveal an unusual aluminium-framed base, as well as a good-sized storage area.
There are plenty of 240V powerpoints scattered throughout the van although, surprisingly for an offroad van, there are no 12V sockets. Lighting is generally well-placed LED fittings, and the van is wired for solar.
In the towing department, the Overlander has a length of slightly less than 6.5m (21ft) and a Tare of 2360kg. The ATM of 3200kg allows a generous load capacity of 840kg, which does push the rig into large 4WD tow vehicle territory. 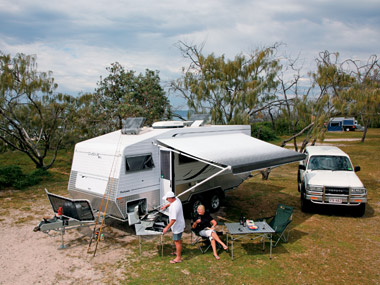 THE BOTTOM LINE
I mentioned that Outback RVs is a relatively small company, but this is not because the Freemans can't sell caravans. Rather, it allows them a more hands-on approach to designing and building their caravans, something evident in this Overlander. All workmanship is top-notch.
The other advantage of a smaller manufacturer is that, within reason, it is possible for customers to get their layout of choice, as well as the desired fittings and appliances. On this level, Outback RVs delivers.
Source: Caravan World Dec 2011.