WE DON'T SLOUCH around. When there's something worth featuring within our pages, we grab it straightaway. Concept Caravans' latest addition to its Newlands range, a luxury upgrade to the Newlands Zodiac series called the Onyx, is a case in point. The van made its debut at October's Melbourne Leisurefest, and after the show's final day, we picked it up straight from the showgrounds. At the time of our test, the van wasn't even available from dealers.
We coupled the Onyx to photographer Stuart Grant's Troop Carrier for a trip to Lake Glenmaggie in eastern Vic. With the Troopie's towbar sitting around 600mm from the ground, we needed a height-adjustable hitch to level out the ride. But once on the road, the Onyx was a picture of composure. Admittedly, our Troopie was overkill for the job - the van's ATM of 2480kg opens it to a wide range of tow vehicles, from Prado to the new turbodiesel Territory with heavy-duty tow pack.
INNER BEAUTY
The layout of our Newlands Onyx is fairly traditional: forward north-south bed, nearside dinette, offside kitchen, and full-width rear bathroom. It's a tried-and-tested layout you'll find in many vans touring Australia's roads. That's not a criticism: from a liveability perspective, the layout works. Why else would so many manufacturers use it?
Up front, there's a queen-size bed (1.5x1.88m) with halogen reading lights and padded headboard. Space around the bed is reasonable. With this layout, it's often a trade-off between room around the bed and the size of the kitchen and/or bathroom. Some manufacturers opt for smaller bedrooms, reasoning that the kitchen is more important, and vice versa. The Onyx, however, strikes a workable balance between the size of the bedroom, kitchen and bathroom.
Bedroom features include wardrobes and tables either side. The Truma hot water heater, however, takes up the lower cupboard space on the offside. But with three overhead lockers, sensibly partitioned to prevent your carefully packed items from sliding around when under tow, you shouldn't be short on storage space.
There are 240V powerpoints either side, and another at the nearside foot-of-bed cupboard, where there is also a mirror. Interestingly, this cupboard 'floats', i.e., it doesn't run to the floor, creating foot room for negotiating your way around the corner of the bed.
The offside kitchen would suit most touring chefs. With a Thetford Caprice Mk III cooktop (including griller and oven), 186L Dometic three-way fridge and LG microwave, it's hard to imagine what more a travelling couple would need for getting dinner organised. Meal-prep space on the Laminex edge plywood (rather than chipboard) benchtop isn't extensive, but it's workable.
In terms of storage, there are six overhead lockers (partitioned) and two cupboards beneath the sink. The holes cut into the shelf beneath for the grey, hot and cold water lines were somewhat splintery - serviceable, but not the neatest presentation.
There is also a pull-out pantry (with 12V Shurflo water pump beneath), a cutlery drawer and drawer for sponges and soap, etc., plus a large cupboard angled towards the bedroom.
The water-filler hose and other plumbing, as well as the wheel arch, take up the floor-level space in this cupboard; however, there's plenty of storage room on the two shelves above - this space is also where the 12V fuses are kept.
As for entertainment, the Onyx comes equipped with a flatscreen TV, with the swing-arm bracket mounted at the forward end of the bench. So whether relaxing at the dinette or propped up on pillows in bed, the telly can be viewed from anywhere in the van - except the bathroom, of course. There is also a JVC sound system connected to two internal and two external DNA speakers.

HIGHLIGHT
There's nothing about the Onyx that seems out of place. The interior sections - bedroom, kitchen, bathroom - integrate nicely and everything works as it should. But every van needs a highlight, and for me, the Onyx's is the dinette. Its leather-upholstered L-shaped unit looks inviting and is downright comfortable. There is hatch access to the storage beneath at either end; however, the main length of the dinette is (understandably) occupied by the wheel arch. Your best bet is to use the space at the base of the "L".
The "Tommy" table setup is versatile in that it slides on a north-south and an east-west axis, creating extra leg and elbow room. The table's main leg can then lower, 'scissoring' in two to form the support structure beneath the table as it becomes the base for a secondary bed. Once you become acquainted with how it all works, it takes all of five seconds to lower the table. It's a non-standard feature, but it's a good one.
Above the dinette is a row of five overhead lockers - a generous storage area. There's also one reading light (a second wouldn't go astray, though).
The bathroom is fitted with a Thetford toilet on the nearside, a large shower on the offside with 12V fan hatch, and a central vanity unit with stylish china bowl along the rear wall and three classy downlights set into a shelf above. A Lemair top-loader washing machine is tucked neatly beneath the bench in the nearside corner. Overall, the bathroom is a very well-appointed space, and the washing machine is great for longer trips. There's even a fan hatch above the loo which, apart from the obvious, works as a skylight when open.
Other internal features of the Onyx include a Dometic reverse-cycle air-conditioner, Antennatek antenna, a gas strut on each overhead locker door for extra rigidity, a generous spread of LED downlights throughout, and two hatches for better ventilation.

OUTSIDE
Externally, there's a lot to like about the Onyx. It has all of the usual features, along with a few extras that should make your travels all the more pleasant.
For starters, there's a (non-standard) television bracket, aerial and powerpoint - what could be better than watching the Melbourne Cup under the awning while on tour, your drinks and nibbles arranged on the adjacent fold-down picnic table? And what would a Cup party be without a barbecue? No worries: the Onyx is fitted with a nearside gas bayonet for a BYO grill.
Up front, two 9kg gas cylinders are mounted on the A-frame, which also features a wire mesh rack. The gal-lined front boot is fairly spacious, despite the fact the boot is home to the battery and Breaksafe unit.
A look underneath the Preston chassis reveals that the 6in A-frame tapers to 4in rails that run back to the mounts for the Al-Ko Roller-Rocker suspension. The whole plot rides on 6in main rails to which the 12mm ply floor is glued and screwed. The van is fitted with dual water tanks, one mounted forward of the axles, the other between. Both have a sheet-metal stoneguard.
The Onyx is also fitted with composite black aluminium lower side panels, which make a striking contrast to the checkerplate that you'll find on almost every other caravan on our roads. 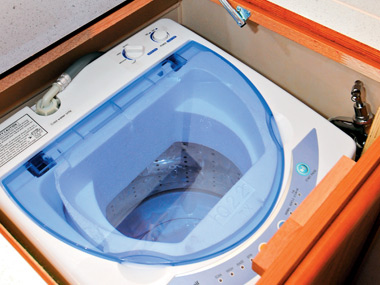 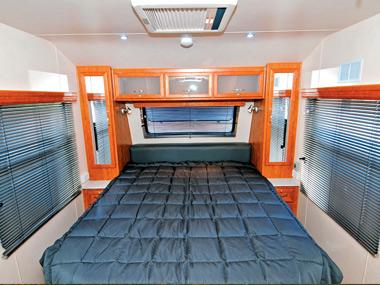 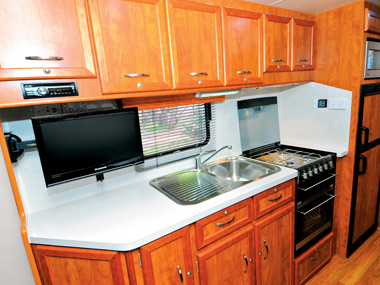 THE BOTTOM LINE
The Newlands Onyx is quite a light van, all the more so considering the features included.
On the road, it was one of the more sure-footed vans I have towed, albeit behind an overkill tow vehicle. But as mentioned, its comparatively light weight - not to mention the (unladen) ball weight of 113kg, which I found to be neither too light nor too heavy - makes it a proposition for people with less muscular vehicles.
Then there's the fact the low-ish starting point on the ball allows some flexibility when it comes to loading your van and tow vehicle, always keeping within legal limits, of course.
Though each and every van and tow vehicle combination is different, I suspect the Onyx would behave properly behind most (if not all) legally capable vehicles.
Overall, as a blacktop tourer the Newlands Onyx would serve couples very well as they made their way around the country.
Thanks to Lake Glenmaggie Caravan Park, (03) 5144 1193, for providing the photoshoot location.