IN THE CARAVAN industry's original heyday (the 1970s and early '80s), two-door vans were not uncommon. But given modern vans are geared towards couples, and the two-door option is more associated with family vans, that particular design fad had almost disappeared.
At least, that was the case until a few manufacturers stared dipping their toes in the water to see how a two-door van might jibe with the current lot of grey nomads. Millard was one such manufacturer, and the Pinnacle is its latest twin-entry offering.
I collected my brand new (post-Sydney Supershow) Pinnacle from 7th Street Caravans near Newcastle and was ready to hit the road.
SUBSTANTIAL UNIT
With an external length of 7.84m (25ft 9in) and a Tare of 2800kg, the Pinnacle does require a hefty tow vehicle. I took the Pinnacle for a cruise along the western side of Lake Macquarie (immediately south of 7th Street Caravans). This stretch may be the area's "road less travelled", but there are quite a few picturesque little bays and inlets that look great in the early morning or late afternoon sun.
Toyota supplied a V8 petrol Sahara for this tow and its 202kW, 410Nm engine delivered the goods with a certain panache. As always, the Toyota proved itself a very stable towing platform. But, as an oil burner by nature, the extra petrol going through the fuel injectors made me wince a bit.
A MATTER OF CONVENIENCE
Why two-door caravans were popular with families back in the day came down to common sense - such as the parents being able to come and go without disturbing sleeping children.
For a travelling couple, these little things don't really apply and the second door is more of a convenience. It is also a very reasonable idea that a custom two-door van could set up as an office. And while it may be less likely to be used this way, a second door also provides an additional emergency exit.
The two-door design works well with the Pinnacle's (very popular) layout choice: front bedroom; middle kitchen and dinette; and full-width rear bathroom. In terms of décor, the cabinetry comes with a medium timber finish, while the floor has a pseudo timber effect.
The ceiling is a bright and pleasant white. LED lighting is used throughout and the ceiling-mounted fittings (set in the curved timber) not only look good but are very effective.
For the touring gourmet, the Pinnacle has a substantial amount of cooking space. The kitchen is located along the nearside wall between the entry doors and has all the usual features including a stainless steel sink, Swift four-burner cooktop with grill and oven, and a microwave set slightly lower than the overhead lockers. This leaves plenty of room for an assortment of overhead lockers, cupboards and drawers. Instead of timber fascias, each of the lockers have dark tinted acrylic inserts. Benchtop space is very generous, despite the flush lid fitted above the cooktop.
On the opposite side of the van, a Dometic three-way 186L fridge stands at attention between a double-width slide-out pantry and cabinet. The cabinet contains a couple of welcome surprises, including a two-door cupboard and a front-loading washing machine. But the real surprise is the fold-out ironing board in the middle. The only reason to leave the van is to hang out the washing!
A leather dinette with a tri-fold table and a large window also sit on the offside of the van. Sideways with the feet up is a potential sitting position at the dinette, but relatively thin wall cushions mean it might not be comfortable for some. Overhead lockers and a small shelf sit above the dinette.
UP-FRONT COMFORT
Large windows and a big roof hatch ensure the bedroom is a bright and breezy place. The 1.95x1.5m (6ft 5in x 4ft 11in) island bed is longer than most, which should be warmly welcomed by the taller RVers out there. The intrusion of the front boot allows for a shelf behind the bed, but reduces the hanging space in the side wardrobes. Both foot-of-bed corner cupboards have full-length mirrors.
It has become quite common for a separate shower to sit on the nearside, but the Pinnacle instead has its cubicle on the offside, with the Dometic cassette toilet opposite and a vanity in between. In addition to a couple of drawers and a cupboard, the bathroom is deep enough to accommodate a top-opening bin next to the loo. You can't swing a cat but, like the rest of the van, the bathroom is relatively spacious.
Aluminium is used for the van's frame and cladding. Everything sits on a 6in-railed, hot-dipped galvanised chassis and rides on Cruisemaster independent suspension, complete with trailing arms, coil springs and shock absorbers.
The Pinnacle has a terrific amount of external bin storage. In addition to the two-door front boot, there is a tunnel boot (containing a slide-out barbecue) and an alloy checkerplate bin on the drawbar. Overloading on the ball might be the only potential hazard with all of this storage space at the front of the van. The set of electric steps and an electric awning are standard.
THE BOTTOM LINE
The largest van in the Millard range, the Pinnacle is a well-appointed rig and the Cruisemaster suspension gives the van considerable versatility. The negative aspect of the second door setup - apart from remembering to lock it - is that something like an extra cupboard or storage space is lost. But thanks to the Pinnacle's length, this is not too much of an issue.
Front and rear entry doors certainly help make things a little different - they're a throwback to vans of yore - and the whole unit should appeal to travellers who like their space.
Source: Caravan World Jul 2011. 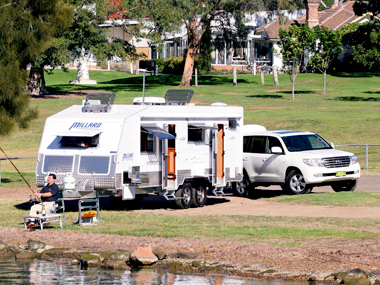