Many vans featured in the pages of CW are longer than 6.5m (21ft) and they usually offer all kinds of comforts in relatively spacious surrounds. But what if you want the essential features in a shorter and lighter van?

All of this, of course, makes it perfectly suitable for towing by a wide range of vehicles, possibly including whatever you already have parked in the garage. Being a small van, it's no drama to tow - it was certainly a well-behaved little rig behind our Kia Sorento. 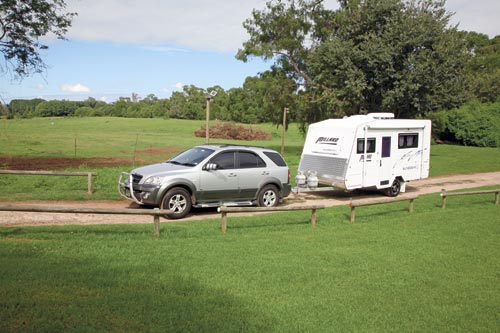 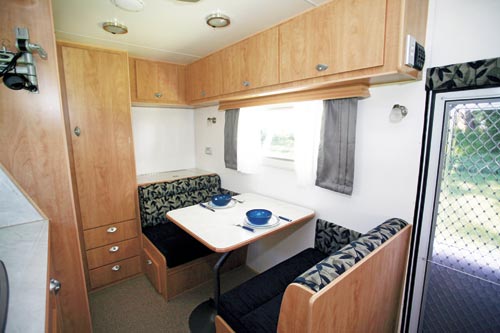 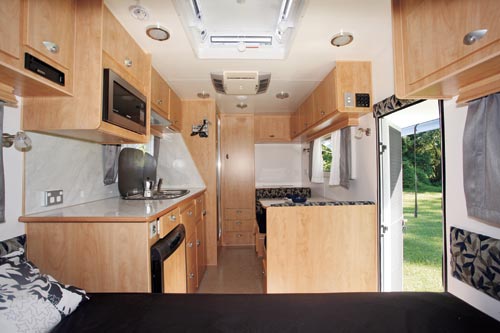 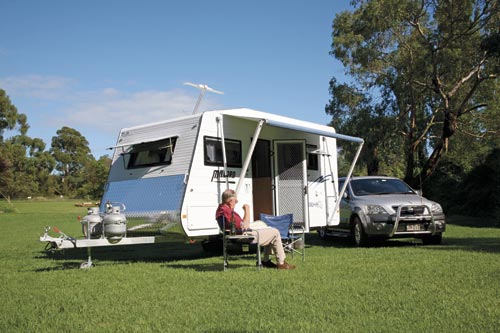 Like the rest of the Millard range, the Sunseeka is built on a hot-dipped galvanised chassis with 100x50mm (4in x 2in) rails and drawbar, along with 50mm (2in) cross members. The beam axle-fitted leafspring suspension gives the chassis a slight lift via a 50mm (2in) riser. Both the water tanks are fitted between the rails and forward of the axle.

Things are kept fairly simple on the drawbar: ball coupling, handbrake, jockey wheel and two 9kg gas cylinders. There isn't a conventional boot as such; instead, a tunnel boot runs across the front. There is also a storage bin at the rear nearside, which can be used for a generator or for general storage.

Being a Millard caravan, the external and structural bodywork is aluminium. It has Seitz double-glazed acrylic windows, a 1.7m (5ft 7in) Camec security door and, out of sight, insulation in the walls and roof. I mention that last item because, although it's generally considered to be a standard item, there are some manufacturers who have reverted to offering insulation as an option - so make sure you read the fine print before signing! Checkerplate stone protection adorns the front of the van while, at the rear, a simple bumper bar acts as the mount for the spare wheel.

At the end of the day, there are bound to be a few compromises in a small van such as this.

The Sunseeka comes with a few surprises and plenty of equipment as standard.

Being a 4.74m (15ft 7in) van with a bathroom means some other features are necessarily compressed or laid-out differently, such as the bed, which is fitted east-west across the front of the van. This, however, leaves enough room for a kitchen along the offside wall, as well as a generous amount of internal storage space and a dinette on the nearside.

Although the timber pelmets look quite classy, the full curtains, unlike the net curtains, are for decoration only.

Fortunately the windows have integrated blinds, as well as insect screens, as standard. The internal finish looks fine in general, but I thought the wall rivets could have been disguised a bit better.

Ventilation is by way of windows, a Four Seasons hatch mounted mid-van, and a Dometic air-conditioner. LED lights are fitted throughout, with most of the switches being handily located by the entry door. Entertainment is handled by the radio/CD player located above the bedhead and the flatscreen TV mounting bracket on the bathroom wall, although that limits TV viewing to the dinette only.

Measuring 1.94x1.51m (6ft 4in x 5ft), the bed is certainly of a good size, although it's going to be a compromise for those who prefer an island bed - but that's the price you pay when opting for a shorter van. There are no bedside shelves; rather, overhead lockers are fitted, as is a drawer underneath the bed, supplying plenty of storage options.

To save a bit of space in the kitchen, and to give a bit more benchtop working space, Millard has done two things: fit the 90L three-way fridge under the bench; and use a three-burner cooktop/stainless steel sink combo unit. The latter is certainly effective in the space saving department but it does mean going without a grill and oven. However, a microwave is fitted into the overhead lockers at a lower height than usual, which is excellent for shorter people. For general storage, three drawers of various sizes, as well as a couple of cupboards and a wire basket slide-out pantry have been fitted under the bench.

Powerpoints have been fitted at either end of the bench and lighting is quite generous.

The table is of an adequate size for two people at the cafe-style dinette. Contoured cushions are fitted to both the seats and back rests and the table can be swiveled around if needed.

There is plenty of storage in this corner of the van. In addition to the overhead lockers and under-seat drawers, there is a storage bin behind the rear seat. The cabinet in the mid-rear wall, meanwhile, has hanging space and three drawers below.

This leaves the remaining space in the rear offside corner for the bathroom, which has a variable-height, flexible-hose shower, Dometic cassette toilet and a small corner washbasin. It's not particularly spacious but it is roomy enough for all the necessities.

I should note that, although this is a standard Millard layout, there are several layout variations available. Due to its length, the Sunseeka doesn't require a large tow vehicle, nor does it need a lengthy parking spot. It is aimed at the budget conscious traveller, and there are certainly a few design compromises, involved.

That said, the Sunseeka 1560 does not lack the features for comfortable caravan travel on the blacktop.