Surviving, and prospering, after 10 years in the competitive Australian RV industry is good reason to celebrate. And Vic's Majestic Caravans has done just that in the most appealing and practical way - with a special anniversary model based on its popular custom-built Knight range.

It's an important milestone, with Majestic having come a long way from its beginnings in 2002, when Laz Naumoski and his brother-in-law, Vince Mitreski, began building little 2.75m (9ft) vans in Campbellfield on the outskirts of Melbourne.

Today, Majestic has additional facilities in Geelong, Vic, as well as dealers in NSW and Qld, and is producing a range of luxury units with all the latest features at the rate of around five a week. 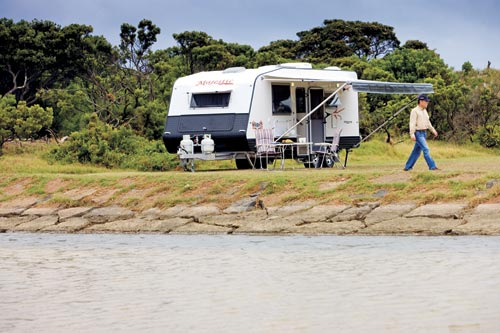 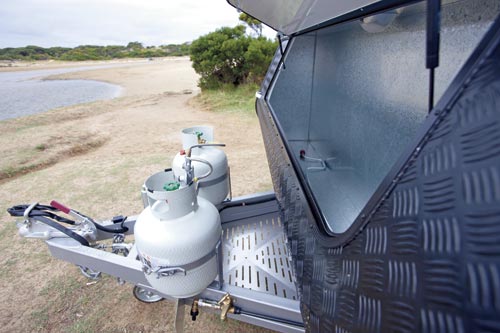 BEAUTY INSIDE AND OUT

This design does add around 50-60kg to the weight of an equivalent van, but Majestic has found that most people are happy to trade that off against its eye-catching appearance. Matching the smart look on the outside, the Anniversary's interior features elegant flat panel furniture and gives the overwhelming impression of a modern, elegant caravan.

Majestic chose the tandem-axle Knight platform for the new model because it offers the greatest opportunity for customisation and a number of the van's standard features have been drawn from the model's option list. In addition to the Knight's very complete standard specification, which includes a SupaGal 100x50mm chassis and A-frame, water-tank protector (and level gauge), roll-out awning, front and rear window protector shades and a 100Ah deep-cycle battery, Anniversary buyers get 15in wheels (instead of 14in), fold-down picnic table, exterior audio/video connections, external gas barbecue bayonet, Wineguard TV antenna and a mesh stone guard on the drawbar.

On the inside, the new model has leather upholstery in a range of colours, new furniture and a water filter on top of the 90L three-way fridge. There is also an innerspring queen mattress, comfortable pillow upholstery, CD/DVD/radio with roof speakers, top-loading Lemair washing machine and well-placed LED lights.

For such a complete vehicle, the Majestic Anniversary is very manageable. Its Tare of 2242kg and ATM of 2642kg mean it can be towed by a wide range of tow vehicles, including medium-size SUVs. We chose Nissan's latest Narava ST-X 550 Dual Cab 4X4 ute, and it handled the task with consummate ease (see towing report on page 60).

With its maximum ball weight of 260kg, the Anniversary sat nicely on the back of the Navara, only causing the ute's rear end to dip slightly despite the absence of a load-leveling hitch, which is not recommended by Nissan. Heading down to Anglesea via Melbourne's Western Ring Road and the Princes Freeway, we had no trouble keeping pace with the rapid traffic flow.

Heading through the series of sweeping bends, the rig felt very secure and stable on its leaf-spring suspension while travelling at the posted 80km/h limit
and gave every impression it would be a very good long-distance travelling companion.

Setting up the van is very straightforward and after attaching the separate jockey wheel, lowering the Ezi Drop corner stabilisers and rolling out the large awning, we quickly felt at home.

Entry is through a convenient (almost) central door, with the bedroom on the left and the dining and lounge to the right. A large Four Seasons hatch sheds plenty of light on this heavily-trafficked area.

Upon entering, you are immediately struck by the classy look of the Anniversary's Euro-style fitout, with the dark brown cupboards and their modern stainless steel handles contrasting nicely with the black leather dinette upholstery and timber-look vinyl flooring.

However, if your taste is a little more cosmopolitan you can tailor the décor accordingly - Majestic has another nine door panels to choose from. We saw another Anniversary at the factory with lighter timber and bright red leather trim that has a distinct holiday ambiance.

The bed is located in a commanding position at the head of the van, perfect to survey the breakfast-in-bed preparation area, and well away from the bathroom, as it should be.

Working your way to the rear, the kitchen is generous in size, with good bench space. A feature we particularly liked was the raised location of the microwave and 90L three-way fridge, minimising the need to stoop.

The slide-out pantry is supplemented by plenty of other cupboard space, but the four-seater dinette is a bit squeezy and the table is tiny. If you are planning a dinner party in the Anniversary, best to invite only close friends.

Heading past the fridge into the bathroom, you are initially met by a washbasin, with the toilet to the left and separate shower cubicle to the right. There is good space here, but no privacy within the bathroom for respective users of the toilet or shower.

One small feature that will be appreciated by many is the top-loading Lemair washing machine tucked away in the lower cupboard beside the toilet, although getting things in an out involves some minor contortions. But its presence means Anniversary owners can contemplate a serious long-distance trip with all the comforts of home.

In the 10 years since its establishment, Majestic had built a solid reputation and gained a loyal following based on a proven formula of quality and value for money.

The new Anniversary model packages many of the most desirable options available on the popular Knight range into a stylish, modern caravan that is right in the sweet spot of the now-dominant $45,000-$65,000 van market.

But the Anniversary isn't Majestic's only celebration of its decade in the business. Since 2007, Majestic Caravans has raised more than $240,000 for the Royal Children's' Hospital Good Friday Appeal and in that time has donated five top-of-the-line caravans to the appeal's highly successful online auction.

It has again pledged its support for this great cause in 2012.

• Having the bathroom at opposite end to the bedroom

• More seating room and bigger table in the dinette

The Nissan Navara has been one of Australia's favourite work (and play) horses for more than a decade. And recent changes to the range mean the Navara is an even more practical tow-vehicle choice for a wide range of caravans.

While the four-cylinder Navara's muscular 2.5L turbodiesel engine is a proven performer, the 2012 Navara, with the smoother and more powerful 3L V6 turbodiesel, is a definite towing improvement.

For our tow test we hooked up the ST-X 550 to our Majestic Anniversary van. Like its cheaper ST-X sibling, the ST-X 550 has a 3000kg braked trailer towing capacity (750kg unbraked), which puts it only just behind the latest Mazda B50 five-cylinder turbodiesel and the Ford Ranger at the top of the medium-sized 4WD ute pack.

With a Tare of 2244kg and ATM of 2642kg, the van was comfortably in the V6 Navara's towing capabilities.

The seven-speed auto is unique in this class and on the flat the Navara used its torque to its advantage and would hold top gear, keeping fuel consumption in the 13-14L/100km range. Yet even when it changed back to sixth-gear on uphill sections, consumption suffered little, the transmission keeping the engine turning comfortably in its peak torque band.

Despite Nissan's opposition to load-levelling devices, the tail of the Navara only dipped marginally with the Majestic on its towball, with the vehicle's progressive-rate leaf springs providing a firm ride once we left the freeway for some photos.

Photography often in involves driving past a fixed location several times in opposite directions, which means accelerating to cruising speed in a short time. Our main location also involved a steep uphill climb and the Navara's prodigious 550Nm of torque at 1750rpm proved its worth in hauling the Majestic from a crawl to the speed limit.

On the way home, we had to hold the Navara back from exceeding the 80km/h speed limit on the long, uphill run with many graded curves. Admittedly, the van was lightly loaded, but even with a full measure of fluids, provisions and clothing, there is little doubt the Navara would be capable of taking the van anywhere it was designed to go.

And it won't cost you the earth. Checking the fuel consumption after 275km of towing revealed an overall consumption rate of 16.1L/100km at an average speed of around 60km/h. However, travellers could expect something closer to 13.5-15L/100km under touring conditions, thanks in part to the lazy cruising afforded by the seven-speed transmission.

Test_Majestic The Majestic Knight Anniversary caravan was released to commemorate 10 years in the business. review caravan