IT'S COMMON KNOWLEDGE in the RV industry that Vic is the caravan manufacturing capital of Australia. But did you know Geelong is the caravan sales capital of Vic? So says Tony Hall of Majestic Caravans in Geelong, as he reels off some of the caravans on display in Vic's second city: Windsor, A'van, Compass, Olympic, Roadstar, Jayco, Supreme and, of course, Majestic.

Tony has a better take on these things than most. He's been in the caravan business since 1977, when he started selling Franklin vans. We were discussing some of the recent changes in the industry when we set off down the Great Ocean Road with our distinctive new test van - the Majestic Trailblazer - on tow. Our destination was the Cumberland River Holiday Park.

With its stunning tungsten grey cladding contrasted against black checkerplate, this Majestic is a real head turner. It's a radical departure from the usual white (or off white) that every other van seems to come in, and the primarily black decals add to the distinctive look. Unusually, the checkerplate runs half way up the back of the van, adding extra support for the triple light sets. 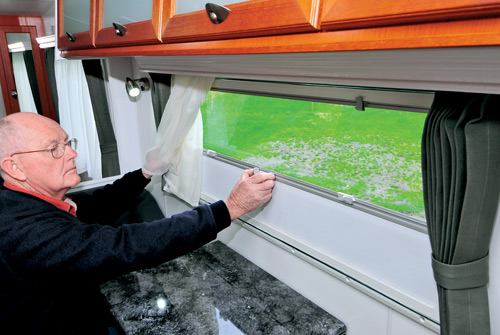 The tandem-axle Trailblazer has a reasonably hefty ATM of 2908kg, so it requires a large tow vehicle. We had no problems, though, with the Audi Quattro Q7 3L diesel (borrowed from Majestic), which has a towing capacity of 3500kg. It powered around the Great Ocean Road's bends and twists with ease.

Majestic is blazing new trails with the construction of this van. The base is standard meranti timber, but the outer surface is one-piece aluminium cladding glued on to the timber, resulting in a strong sandwich construction. It is also easy to clean.

The chassis has a 4in A-frame which, at first glance, looks a little small for such a heavy van, but a spot weld brace gives it the strength of a 6in chassis. The A-frame carries two 9kg gas cylinders, a centre jockey wheel and stone-protected mains tap. There are also 2in raisers further back for extra clearance.

With the spare tyre on the back of the van, the front boot is home to a 100Ah deep-cycle battery and CTEK charger, leaving plenty of extra storage space for those bulky items like chairs and fold-up tables.

Underneath, the massive Control Rider offroad suspension system gives a smooth ride and two central 95L water tanks are well protected. All wiring and plumbing is nicely secured with no nasty gaps anywhere, and the corner jacks are quick-release adjustables. The 15in tyres sit on attractive alloy rims.

Like many modern vans, the Trailblazer allows vanners to enjoy life under the large awning with a slide-out barbecue, drop-down picnic table, double powerpoint, extra LED lights and an entertainment box with a TV arm.

Climbing aboard is made easier with the grab handle inside the triple-lock door. The exterior colour scheme is also continued on the inside, with the grey leather dinette and marbled benchtops and splashbacks contrasting with the "apple tango" ply cabinetry, white gloss walls and dark curtains. I must admit I didn't particularly like this colour scheme, but it is something that can easily be changed.

Upon entry you will also immediately notice the layout is the classic rear bathroom, central kitchen and front bedroom design.

There is plenty of storage space in the kitchen and the overhead cabinets on either side are attractively angled with LED downlights. Each cupboard has shelving, allowing for better use of the space, and they are all lined with white gloss ply, which is very easy to wipe down.

The swivel TV arm at the end of the nearside kitchen offers good viewing from the comfortable dinette (which has fold-out footrests) and bedroom. The sound system is supported by two speakers and the electrics and fuse boxes are at convenient head height - not down at floor level.

Some manufacturers could take note of the fridge placement in the Trailblazer: it is elevated with two larger pot drawers underneath.

The placement of the microwave also gets a big tick - it is low enough for easy access and has a handy shelf above.

The Swift cooktop/grill features three gas burners and one electric hotplate, while the large sink, with water filter, is angled outwards, giving some extra storage space. The kitchen has no oven, which is not essential to my mind and allows for some more storage space.

The bathroom also scores good marks, starting with the especially large nearside shower cubicle. There is also a classy-looking porcelain toilet bowl and vanity with a large mirror. Hidden away next to the vanity is the Lemair washing machine.

Majestic has not wasted any space in this van and the bathroom is no exception: the small drawer below the large storage cupboards on the offside is a great example of maximising space and would be a useful place for some of those bathroom bits and pieces. As in the kitchen, all the cupboards have plenty of shelves and the cabinetry finish is excellent.

The bedroom is pretty standard with a 1.9x1.54m (6ft 3in x 5ft 6in) queen bed with innerspring mattress and adjustable slat base, with mirrored wardrobes on either side. Two drawers have been installed below the wardrobes, which are a much better use of this space and easier to access than a hatch opening. There is a shelf at the head of the bed, along with individual reading lights.

With large windows on either side, plus one at the head of the bed, there is no shortage of natural light. A pair of Four Seasons hatches fore and aft also help increase ventilation and light throughout the van. The Dometic windows are double glazed with vertical night shades and flyscreen blinds and, according to Tony Hall, they fit so well that water leaks will never be a problem.

Several other floor plans are available. Tony suggested a family could replace the ensuite with bunks and add an external shower.

Touring vans for couples are a huge slice of the market, so competition is fierce. These days, many vans come with some rough-road ability and plenty of home comforts, such as washing machines, slide-out barbecues and outside entertainment units.

Majestic has got most things right with the Trailblazer: plenty of space, all the luxuries, sound build quality and a distinctive look.

Thanks to Cumberland River Holiday Park for providing the test location.