AT THE RISK OF sounding a little philosophical, it has always seemed to me that when you're younger you tend to view things from a very black and white perspective. But as you grow older, various shades of grey start to creep in, and not just in terms of hair colour.
With this in mind, it's interesting to see that the new Lotus Vogue caravan, which is aimed squarely at the grey nomad demographic, is almost totally black and white in its colour scheme - inside and out.
It might sound like a very plain look, but it's more eye-catching than you would think. First of all, the external 'white' is actually a very light - and aesthetically pleasing - grey. The van drew some very curious glances from the horses and alpacas at Qld's Kenilworth Homestead when I stopped for a photo opportunity.

SOLID BUILD
Although the Vogue body is built in what you would call a traditional style, with an insulation-filled timber frame and aluminium cladding, the large bubble-style hopper windows, black checkerplate, vinyl stoneguard and smart decals give this van an attractive look.
A SupaGal box section chassis, with the drawbar rails running back to the suspension mounts, underpins the Vogue. The tandem axle load-sharing suspension is fitted with a 50mm riser and it all rolls on 16in alloy wheels. Twin galvanised sheet-protected 95L water tanks take up the space above the axles.
Generally speaking, the Vogue's underbody is neat and tidy, but I did notice a few wires, etc., hanging down.
In addition to the normal ball coupling, handbrake and centre-mounted jockey wheel, two 9kg gas cylinders are fitted to the drawbar. Around the back, the single spare wheel is mounted on a 50x50mm (2in x 2in) bumper bar. There isn't a front boot, but rather a tunnel, which comes complete with its own light.
With all that's fitted into the Vogue, the van's Tare comes in at 2280kg, with an ATM of 2680kg, which means a mid-sized tow vehicle is required. My dual cab Ford Ranger coped with no problems and, despite its rather utilitarian background, proved to be a very effective and stable hauler.

LIGHT AND BRIGHT
As I mentioned earlier, the interior mostly features a very light colour scheme, with the tan upholstery, and black fridge doors and oven providing some welcome contrast. This design, combined with large windows and two roof hatches, makes for an especially bright interior. In fact, some might find it a bit too stark, and it's not helped by the lack of curtains, but a bright interior such as this improves space perceptions no end.
All windows have integrated blinds and screens, LED lighting is fitted throughout and the air-conditioning is supplied by a roof-mounted Aircommand Ibis unit.
While I am, admittedly, not a clairvoyant of any sort, I do wonder if the seemingly-standard front bedroom/rear bathroom layout this Vogue employs will eventually become known as the "Grey Nomad". But I digress. Between the bedroom and the bathroom, the Vogue has an offside kitchen, nearside dinette and forward entry.
It might be the contemporary look, but to my eyes the cabinetry had a somewhat square-ish look about it, offset slightly by the curved light-mounting plates in the ceiling.
In a 7.97m (26ft 2in) van like this one, there is fair bit space for the kitchen. A 186L two-door fridge, which is helpfully set off the floor for easier access, is fitted into the rear corner, while a stainless steel sink and Swift four-burner cooktop/grill/oven sit in the adjoining benchtop. There isn't a great deal of spare bench space, but the cooktop does have a flush lid.
Above the sink, the microwave is set slightly lower than the adjoining overhead lockers, one of which contains the 240V circuit breakers, hot water switch and water tank gauges. Under-bench storage consists of one cupboard, three drawers and two floor lockers. The large kitchen window allows for plenty of ventilation.
Opposite the kitchen, the dinette comes with a tri-fold table, wall cushions and hinged footrests. It's a fairly open setup, with the usual overhead lockers and a small under-table cupboard. Both seats have storage underneath, accessed by a hatch, but the rear section is partly taken up by the 100Ah house battery. 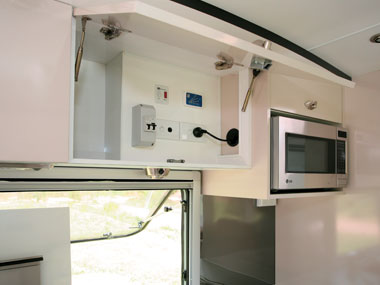 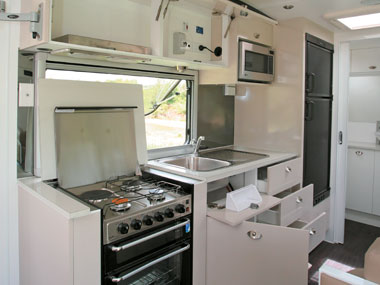 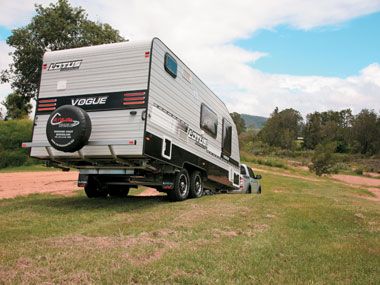 BED AND BATH
Large windows around the bed allow for plenty of crossflow ventilation, and the lack of any foot-of-bed cupboards makes for a very uncluttered bedroom. There are the usual bedside wardrobes, overhead lockers and (larger-than-usual) bedside cabinets. Sitting on a posture slat bed base, the innerspring mattress measures 1.85x1.55m (6ft 1in x 5ft 1in). Under-bed storage is smaller than usual because of the tunnel boot.
Given it's such a generous space, there is no shortage of room in the bathroom. Even with the top-loading washing machine, there is still room for three overhead lockers, two drawers and a cupboard.
A 'floating' washbasin, complete with a rather modern-looking tap, sits underneath the large wall mirror. The nearside shower cubicle and offside Dometic cassette toilet complete this nice picture.
Bathroom ventilation is easily handled by two vent fans and a small window above the toilet.

THE BOTTOM LINE
Although this Lotus Vogue has a fairly standard layout, it's a top quality unit and the internal colour scheme makes it stand out from the crowd.
The van comes with everything (including a washing machine) a pair of grey nomads could want on an extended trip, and the external color combination is a real winner. Plus, the fact the van doesn't need a huge tow vehicle makes it suitable for a much wider range of customers.