Generally speaking, most caravans built in Australia are white in colour. There are some good reasons for this, one being that, oddly enough, white doesn’t show up dirt too badly. However, a few manufacturers step outside that little box and use different colours, like Lotus Caravans did with its off-white and satin black Freelander. Apart from anything else, it gives their vans a very distinctive look.

Lotus Caravans is certainly not the largest caravan manufacturer in Australia but, like many manufacturers of its size, it’s able to offer a range of caravans that are not only constantly evolving but also look a bit different to the majority – it’s not always easy to stand out from the crowd.

My review Lotus Freelander came from Caravan World at Nambour, Qld, located not far from the Big Pineapple. 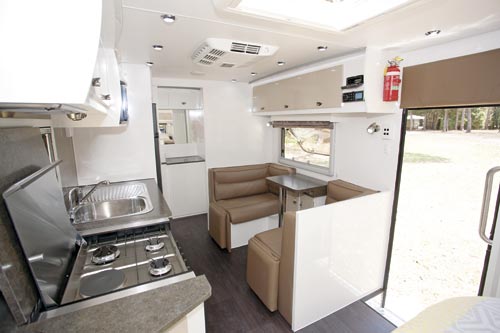 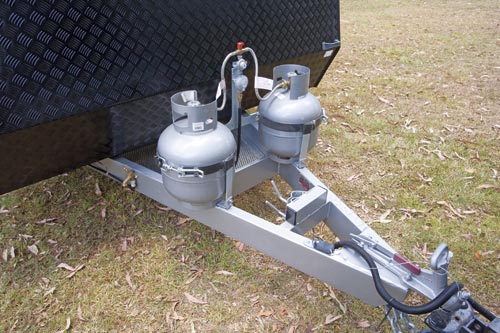 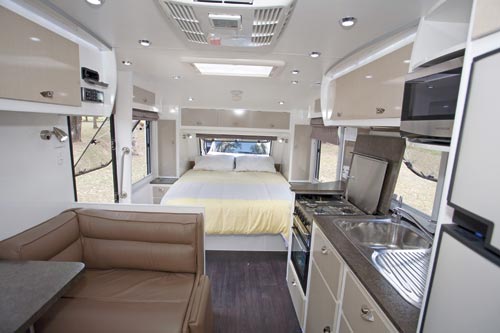 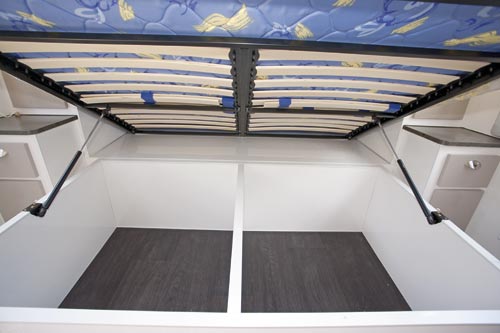 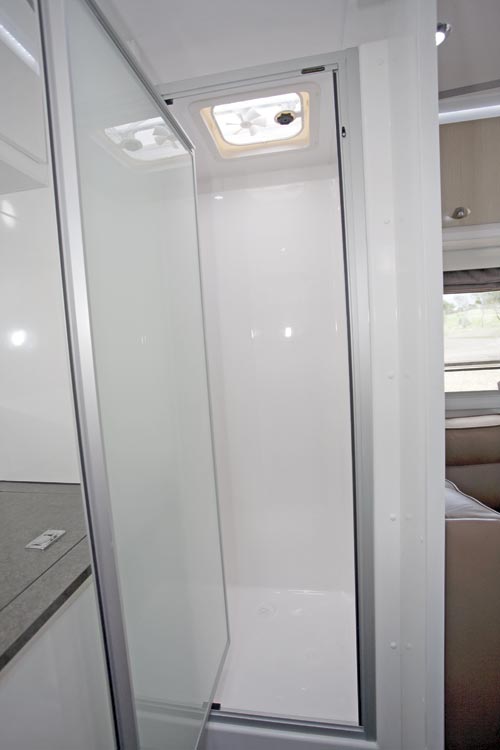 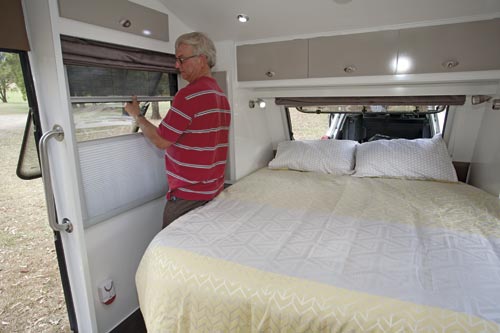 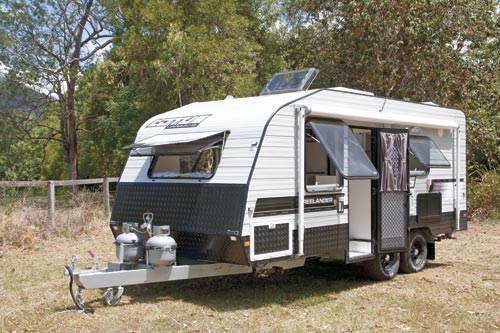 The Freelander’s body colour, which includes a low waistline of black powder-coated checkerplate, is its trademark. It draws attention and looks quite stylish, with the dark tinted, bubble-style hopper windows.

But the satin black does have one disadvantage that I discovered on dirt roads – it shows up dust and dirt very easily.

Speaking of dirt roads, the Freelander is designed for rough-road travel. It rides on tandem-axle load-sharing Simplicity suspension with a leafspring/trailing arm setup that is bolted and welded to a 100mm-railed G&S box section SupaGal chassis.

At 150mm, the drawbar rails are taller and don’t run right back to the suspension mounts. Instead, strengthening pieces of 50x50mm RHS steel are laminated to the chassis rails and welded in with the drawbar rails.

A look under the chassis reveals all the plumbing and cabling to be neatly strapped up out of the way and two gal-sheet-protected 95L water tanks mounted between the chassis rails towards the front of the van.

Up front, the drawbar rails support two 9kg gas cylinders and there is a wire mesh between the rails. At the rear, the bumper just sports a spare wheel. There is no front boot but there is a decent-sized tunnel boot that is accessible from both sides.

The interior layout comprises a bedroom to the left (front), a dinette on the nearside, with a kitchen bench on the offside and a full-width bathroom across the rear. Even in daylight it’s obvious that a generous number of LED downlights, along with reading lights for the bed and dinette, will keep everything well lit.

But there’s nothing wrong with the ambient light in the Freelander: two large marine-style hatches supply extra light and ventilation. All the windows come with integrated blinds and screens and all except the kitchen windows have Roman blinds, which are a pleasant touch.

Extra cooling is provided by the roof-mounted Aircommand Ibis air-conditioner.

Like the exterior, the Freelander’s interior colour scheme is quite striking. This is not a traditional ‘timber look’ van. Instead, some areas such as the bedroom have quite muted colours while others, such as the kitchen and dinette, have a fair amount of contrasting colours. But it’s very easy on the eye.

The insides of all the drawers are powder-coated steel with a Polytec flat finish for the ply fascia panels. Metal drawers might sound a bit basic but it is actually a good idea, from both a low-weight and strength perspective.

One of the trademark Lotus features is hard to miss in this van – the deep windows either side of the bed are distinctive and they would allow a person inside the van to talk to someone outside, if needed.

There are some people who might baulk at having the entry door by the bed but it does mean the bed is easy to walk around. The bed’s posture-slatted base supports a 1.88x1.55m (6ft 2in x 5ft 1in) innerspring mattress and it lifts easily enough for access to the storage space underneath.

In addition to all the usual bedhead storage cupboards, there are small lockers above the windows. These are high enough so that you won’t bang your head, and are better than the diagonal cupboards that are sometimes squeezed in at the foot of the bed. The bedside shelves are a reasonable size, which is just as well because there is no shelf at the back of the bed. Powerpoints are fitted either side.

Although this is quite a large van, the kitchen isn’t particularly so. Most of the bench is taken up by a full stove – cooktop, grill and oven – and a stainless steel sink and drainer. But the cooktop comes with a flush lid to improve benchtop space. Both tank and filtered water are supplied to the sink. Above the sink, the microwave is set lower than the two adjoining overhead lockers. One contains a few electrical essentials such as the 240V circuit breakers, hot water switch, solar panel regulator and water tank gauges.

In addition to the overhead lockers, kitchen storage consists of one cupboard, three drawers, two floor lockers and an open shelf above the microwave. Lockers are also fitted above and below the adjoining 190L fridge.

Above the front end of the kitchen bench, the splash panel has been fitted with 240V and 12V sockets plus RCA connections for the TV and entertainment system. Behind the wall lining, the frame has been strengthened for a TV mounting bracket but there isn’t actually one fitted. It would be a convenient viewing point for both the dinette and the front bed.

Upholstered in leather, the dinette has all the goodies: contoured backs and wall cushions, a tri-fold table, and hinged footrests for both seats. There is a small cupboard complete with a 240V powerpoint under the table, although it’s a bit awkward to access. There’s also a 12V socket outside the cabinet but given that it’s wedged in by the seat cushion, it’s difficult to use easily.

Three overhead lockers, a large window and a Fusion sound system, complete with a separate iPod holder finish off the picture.

The Lotus Freelander’s bathroom is fully-fitted out a with good-sized shower cubicle, Dometic cassette toilet, contemporary looking washbasin and a Lemair top-loading washing machine. That still leaves space for a selection of cupboards, drawers and overhead lockers and a decent-sized wall mirror. Two fan vents and a nearside window supply the necessary ventilation.

How to fill the cabinet space beside the toilet can be a problem for caravan designers – it’s available but hard to get at. A simple solution, like that adopted here, is to fit the hot water system here, in this case a 23L Suburban
unit.

Surprisingly, this Lotus Freelander caravan isn’t particularly heavy. Weighing in with an ATM of 2500kg, it fits nicely into the Toyota Prado class of tow vehicle. On the road, it handled the dirt roads I toured along – yes, I did have a LandCruiser, but the van behaved as it should with no surprises. I mention the weight because, given that it’s designed for rough road touring, it comes with everything that might be considered necessary for outback travel – in the style to which we have become accustomed!

MUSIC TO THE EARS

One of the major advances for travellers, especially for music lovers, has been the ever-developing iPod/iPhone/mp3 players. Entire music collections can now be carried in a mobile phone-sized device, significantly reducing size and weight. The only limiting factor is what to play them on.

Many decent radio/CD players come with a 3.5mm socket these days, but often the problem is where to put the iPod once it’s plugged in. One solution is a long cord and at least one manufacturer we know of fits a small pocket or shelf for that purpose.

But another, albeit more expensive, solution, is something like the Fusion radio fitted in this Lotus van. It comes with a purpose-built iPod holder, into which the iPod neatly fits. Many new tow vehicles come with a similar facility (not necessarily a Fusion) but, sadly, we’re still waiting for motorhome cab chassis manufacturers to catch up.

I frequently travel by air as well as road, and need to travel light. But I like my music and talking books, so the Fusion setup is a good technological step forward!