IN THE CARAVAN INDUSTRY, true innovation is a rare thing. Most manufacturers stick to proven practices - they're safe, and they work. However, 32-year-old Brett Bell, from Melbourne Caravan Repairs, doesn't just follow the herd.
"When I eventually retire I want to be able to wander through caravan parks and see people enjoying my products," he says.
"I want to leave my own stamp on the industry."
The era of Bell's influence has already begun, with the arrival of his fully patented Sky-Deck caravan verandah, fitted here to a Kingston-Bell Park Royal. Never heard of Kingston-Bell? That's because it's a new brand, launched last December by former Melbourne Coromal dealer Caravans West, made to individual specification by Royal Flair.
Caravans West was established in 1999 by Alan Bell, Brett's father, while Melbourne Caravan Repairs, which is run by Brett and his wife Vency, is at the rear of the Caravans West property.
We'll look at the van in due course, but first let's take a closer look at that Sky-Deck…
PERFECT STORM
Brett made some initial sketches for the Sky-Deck as early as 10 years ago, but it wasn't until 2010 that his dream took shape. "Melbourne had a massive hail storm that year and it provided Melbourne Caravan Repairs with a heap of work, which gave us the extra funds to realise the Sky-Deck," he says. Eighteen months of full-time development later, the Sky-Deck was born.
From school Brett tried his hand at cabinet making, staircase fabrication and car audio system installation, among other roles, before establishing Melbourne Caravan Repairs some eight years ago. Also a third-generation caravan repairer, he's a very handy guy.
Brett hasn't gone into this Sky-Deck venture half-cocked, either. "We've spent a considerable sum on the patents alone," he says.
So, what exactly is it? It's a self-contained, drawbar-mounted verandah that can be erected by one person in under a minute, and which adds 3.5sqm of additional living space to an RV. The aluminium structure weighs around 75kg, and at this stage it's only being fitted to Kingston-Bell models.
The timber-look floorboards are available in different wood tones, and the handrail is fitted with smoke polycarbonate panels for privacy. The aluminium end-cap roof lifts up with the assistance of hydraulic gas struts, while the floor drops via a system of springs and plasma ropes, eventually settling on the drawbar. Finally, the handrails swing out and lock into place.
"We went to some trouble to ensure that people in chairs on the Sky-Deck are still at eye level with passersby who might stop for a chat," says Brett. That's bound to happen regularly, as the Sky-Deck draws onlookers like moths to a light.
Brett says the Sky-Deck has many advantages, from offering extra secure room for a pet, to an alternative to the awning for a barbecue, to a pleasant place to sit and admire a sunset.
As our 'models' for the photoshoot - Rosemary and Ian - will attest, the Sky-Deck is also a great place to watch the world go by when the weather turns grim. It was cold and rainy on Vic's Mornington Peninsula on the day of our test, but with the Tebbs-manufactured flyscreens and side-clears in place, the Sky-Deck was well protected. If the weather turns truly foul, you can drop the roof onto the front handrail for even more protection.
The Sky-Deck features double powerpoints either side of its Camec triple-locker door (its only entrance - there's no 'front gate', as such), plus lighting and a TV point. When packed up, you might lose a traditional front boot but you gain an even bigger storage space - the area between the door and the vertically-stowed Sky-Deck floor is about 300mm (1ft) deep and 2m (6ft 7in) high. It's ideal for longer items, but on this particular van the outward-opening door did make access to the offside portion of the space a little tricky. The battery is located under the dinette seating, while the gas cylinder is in its own dedicated rear offside hatch.
A closer looks reveals a quality construction - Brett freely admits he's a perfectionist, and it shows. The 2.3x1.7m (7ft 6in x 5ft 7in) Sky-Deck is rated for 400kg and it's covered by a 12-month warranty. The bottom line? Brett says it adds between $6000 and $8000 to a Kingston-Bell caravan - it's impossible to pinpoint an exact price because each Kingston-Bell is a bespoke creation, and the differing layouts produce differing requirements for Sky-Deck installation. On that note, let's take a peek inside the van proper.

TAILOR MADE
After selling Coromal caravans for years, Brett's father Alan is relishing the challenge of 'going it alone' with his Kingston-Bell line, made to his specs, as mentioned, by Royal Flair.
"I just wanted to give my customers exactly what they wanted," he says. These are essentially bespoke creations - just about any aspect of the van can be customised to the owner's wishes. It's all about delivering a high level of personalised service - something smaller concerns can do so well.
Royal Flair's attention to detail is clearly evident in this Kingston-Bell Park Royal. The Park Royal is the name given to any of the hard-top Kingston-Bell products, and this one - as a demo model - was bristling with features.
Its insulated sandwich-panel shell sits on a G&amp;S 4in DuraGal chassis, which in turn rides on a tandem-axle setup with leaf-spring, roller-rocker suspension (Road Rider independent suspension is available as an option). The smart exterior has all the top features, and once I'd stepped inside I instantly felt at home.
The dark timber tones contrast beautifully with the light ceiling, fabrics and flooring, and the open-plan layout is social and inviting. The central access to the Sky-Deck splits a generous nearside shower and an offside toilet. The van feels really quite spacious, thanks to that open layout and the generous 2m (6ft 7in) ceiling height, which means even lanky types like my 6ft 2in self won't bump their heads on the central roof-mounted Ibis air-conditioner.
Massive windows let the light flood in, aided by central and aft Dometic Heki hatches. The interior construction and fitout is of a high standard, with the polyply walls complemented by timber edging on the cupboard and overhead locker doors.
The mid-offside kitchen places everything at arm's reach, from a sensibly-placed microwave over the 168L Dometic three-way fridge/freezer, to the four-burner Thetford Minigrill, to the square deep-dish sink. There's plenty of cupboard space plus a slide-out pantry aft of the sink, and the cabinetry all works well - positive-locking catches on the cupboards and lockers, and a smooth action for the drawers.
The L-shaped nearside dinette offers comfortable seating for a couple, or four at a pinch. Under the dinette seating is a massive storage area, plus the battery and its associated management system.
That leaves the bedroom, which is so light and airy you'll need a darn good reason to get up each morning. The slat bed measures 1.5x1.88m (4ft 11in x 6ft 2in) - it's comfy, if a little short for me (easily fixed, if need be). The under-bed storage at first looks a little small, but this is only because the rear is taken up by a tunnel boot, accessible by a nearside hatch. Oh, and the offside floor cupboard is swallowed up by the gas cylinder. It's not an issue - there's more than enough storage throughout the van.

THE BOTTOM LINE
I thought I'd seen it all in caravans, then along comes the Sky-Deck. I'm a fan. It's a clever concept that makes use of the space over the drawbar that would otherwise be wasted, and Brett has carried out the execution beautifully. It may initially seem like an extravagance, but give it some thought and its many advantages soon become clear.
And the Kingston-Bell Park Royal? It's hard to fault. The workmanship is of a very high standard, there's broad scope to tailor a layout to meet your needs, and customers will be looked after by an experienced dealer who knows his stuff. In my eyes, the $73,990 price tag (as shown, ex-Vic), which includes the Sky-Deck, is a very reasonable ask.
There's a Bell ringing loud and clear across Australia's RV landscape - this is one father-and-son team to watch. 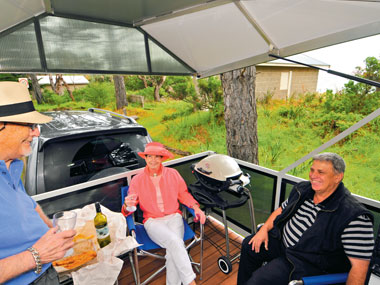 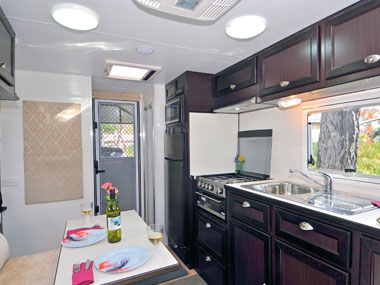 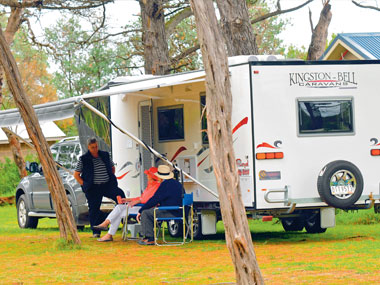 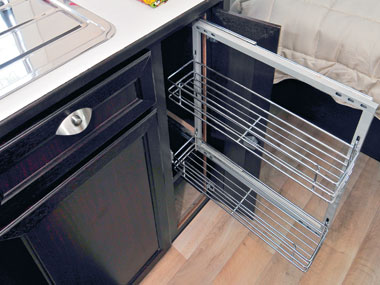 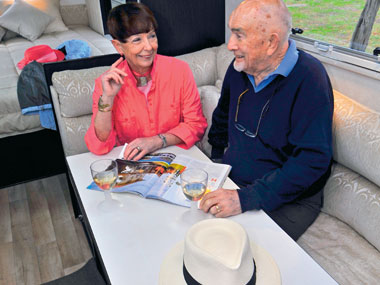