Jurgens Australia has added an attractive new 18ft (5.5m) pop-top to its expanding range. The Jindabyne PT22 has the styling cues of its siblings, with an expansive front window, dual-tone colour scheme and double-glazed windows. In order to attract entry-level buyers, it loses the ensuite, as seen in the similar-sized Skygazer J22, but the upside is the sharp entry-level pricing from $29,990 in its standard trim. And you can always option an external shower and hot water service if you think you need it.

The Jindabyne is available in two layouts: a twin-berth with double island bed, central dinette and L-shaped rear kitchen (PT2210); or a family option that sleeps up to four people, with the same double island bed, centre kitchen and rear double dinette that converts to a sleeper for two kids or a single adult (PT2230). It’s available in standard or deluxe trim and even the standard has plenty of fruit, with an onboard battery and charger, CD/MP3 player, 12V LED lighting, microwave, pillow-top innerspring mattress, pull-out pantry and a water tank level indicator. The deluxe model adds a rollout awning, travel blanket (stoneguard bra), air-conditioning and curtains. Other options include a 22in 12V TV, hot water service, external shower, roof hatch, flick-mixer tap to the sink and the Al-Ko Electronic Stability Control system. 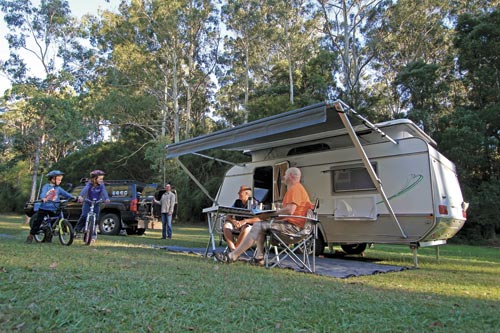 Beyond its impressive looks, the Jindabyne is built on solid foundations. A peek below will reveal a substantial, engineered chassis which has been beefed up, as required, around the axles and other stress areas. The beams are drilled and the electrics run along the inside. Like the rest of the range, the van runs on independent suspension. There are also 10in electric brakes and 14in alloy wheels. The slimline 60L water tank is a little on the small side, even for a van without an ensuite, so any free camping stints should be close to fresh water. The short drawbar houses a standard 50mm coupling, removable jockey wheel, handbrake and plenty of room to fit weight distribution gear if needed.

Complementing the other panel work, the nose and tail wear high gloss, one-piece fibreglass panels, with the nose accommodating a storage boot which houses the twin gas cylinders, spare wheel and various spanners. Once open, a manual strut can pivot to prop it open, although a gas strut would be a welcome addition. Although not pictured, the travel blanket protects the front of the van from road debris off the blacktop or the ever-increasing roadwork on our major highways.

Up top, a one-piece aluminium skinned roof eliminates the need for joins, and Jurgens claims that it is strong enough to walk on. The undersides of the roof, which are visible from the sides, were a little untidy on the test van but, in the scheme of things, it’s a small blemish on an otherwise impressive canvas.

Run an eye over the nearside from nose to tail, and you’ll find a small front compartment with the battery charger and transformer. There’s a twin door with security mesh, vents for fridge and microwave, large picnic table (optional), a bed end window, and an external 240V outlet. The offside sports a smaller kitchen window, 240V powerpoint, TV aerial, vents for rangehood and microwave, and a matching bed-end window. Like the other windows, the front panoramic window is fitted with flywire, blockout blinds and can be propped open on gas struts.

The interior is very liveable. Overhead storage is abundant, although it limits the headspace over the dinette, relegating the window seats to kids-only. And the window pelmet blocks some of the glorious views for adults, we discovered. If you don’t need the third birth, it might be worth considering the PT2210 with rear kitchen as it puts that beautiful front window over the bed.

There’s plenty of storage below the benches and a mini-grill with gas and electric hotplates, rangehood, microwave, 94L fridge-freezer, large stainless steel sink and water level indicator above, with an air-conditioner mounted above the sink.

The extra-width double bed is still 13cm shy in length from a queen-sized bed, but it should suit most average-sized folks. The pillow-top innerspring mattress lifts on gas struts to access a large storage area underneath. Mirrored wardrobes surround the bed with a concealed full-length drop for longer garments. These are supplemented by bedside tables and more cupboards at the bed base corners.

Twelve volt electrics are powered by an on-board battery and a 25A charger and transformer – the latter acting as an inverter. A battery monitor incorporates battery protection and keeps the battery status in check. Below the dinette seat, a switch panel includes separate kill switches for the battery and transformer. The battery switch negates the need to disconnect the batteries during storage, while the transformer switch eliminates the hum and current draw come bed time – all worthy additions.

Setting up is a simple process, limited to dropping the four corner stabilisers and winding down the adjustable feet, popping the top and deploying the large awning. The pop-top was a little heavy for the prototype struts and it needed a substantial heave to pop the roof. Jurgens use its own pop-top design which excludes the normal scissor springs found on many other pop-tops. Production vans will have upgraded struts to ease the lift.

At only 1325kg Tare, the Jindabyne is a delight to tow and, with a low ball weight, will suit many smaller vehicles. Our test loop behind a 3L turbodiesel Nissan Patrol took us two hours east of Melbourne, initially on the Princes Freeway and then north via hilly and windy terrain through the Moondara State Forest to Erica. The blustery conditions along the highway provoked the occasional tail wag at cruising speed or overtaking large vehicles, but otherwise the Jindabyne was a dream to tow up and down dale.

We thoroughly enjoyed our weekend escape in the Jindabyne PT22. As an entry-level proposition, it ticks all the boxes and a few more with its innovative design, well laid out interior and feature set.

Better still, the Jindabyne it can be towed by many small cars, opening it up to a world of new owners.

We picked up the van up from Jurgens’ new $5m facility in Pakenham, Vic, and took the opportunity to inspect the premises. It was enlightening to see the various components under construction at various stages of the production process.

I loved the light and airy feeling inside the van, assisted by the big windows around the bed. There’s plenty of room at the entry, around the dinette and in the kitchen for welcoming friends without tripping over each other. And the ability to slide the table left or right provided extra flexibility to accommodate larger people or improve access to the storage beneath the seats.

The interior drew mixed opinions from those who inspected it during our weekend away. I thought the curved edges were a little dated and not helped by the dark, rounded trim. For me, access around the base of the bed was tight due to the corner cupboards.

Overall, I thought the Jindabyne had plenty going for it and I expect it will do well as an entry-level model for Jurgens. – Anita Pavey