No matter which way you slice it, the modern Jayco caravan represents some of the best value RVing in Australia. Which shouldn't come as a surprise. After all, Jayco is this country's largest RV manufacturer, possessing significant buying power and particularly efficient manufacturing processes. The bottom line: decent vans, extremely competitive prices, and a nationwide servicing and repair network - not to mention a three-year roadside-assistance service. A lot of van for your dollar, in other words.

The Sterling is the company's flagship, available in either hardtop caravan or pop-top configuration. The Sterling pop-top comes in six layout variations, with or without an onboard bathroom, with single beds or a queen. Our test pop-top was, fittingly, Jayco's most popular in the range: the 17.55-3.

There's a sense of design uniformity across the Jayco range, inside and out. It's a level of refinement missing from the vans of some of the smaller players, and some of the larger ones, for that matter. As fellow judge Philip Lord once said about Jayco vans: "They're polished and complete, as though everything has been signed off by one person and not a committee." 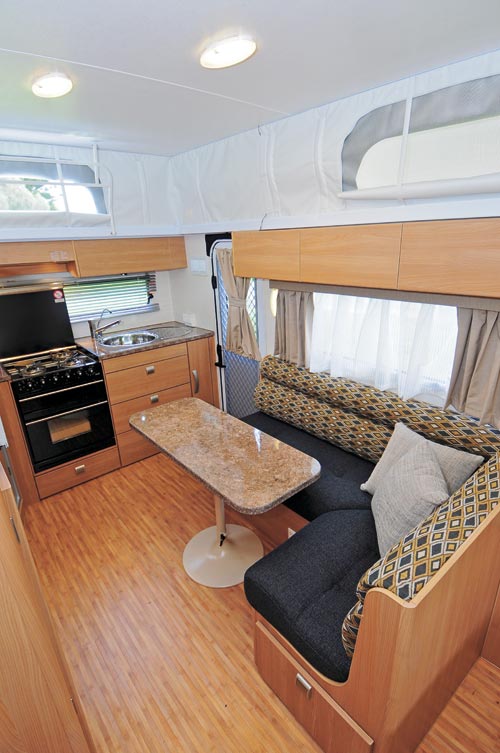 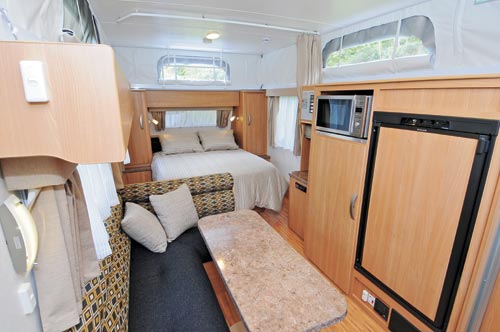 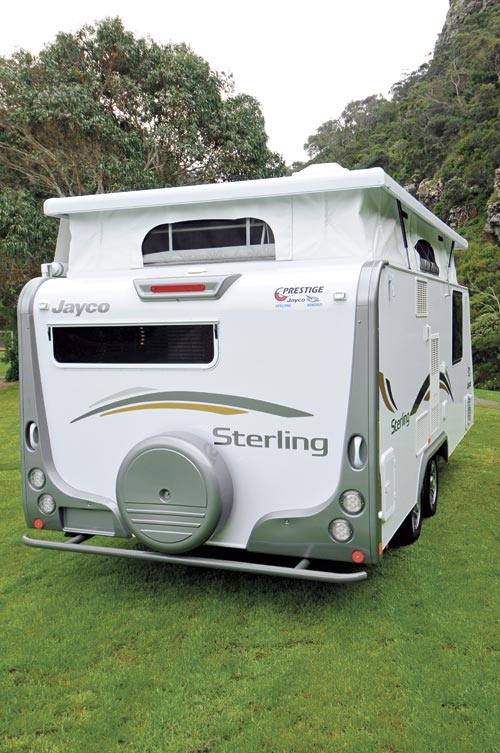 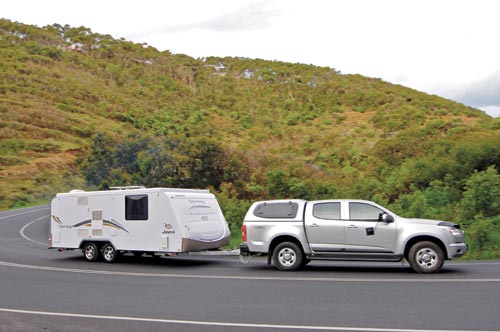 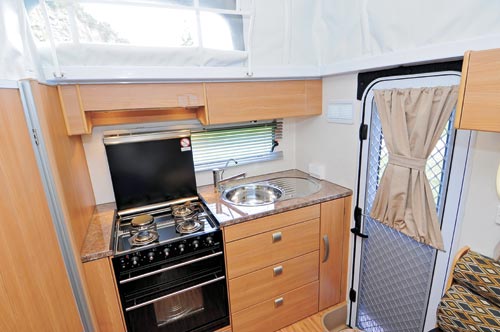 Whether that's the result of 37 years of manufacturing experience, a production line that handles more RVs that any other in Australia, or both, it was clear that on presentation alone, the Sterling - the least expensive of the pop-tops on test - was going to be hard to beat.

The layout is very similar to that of the Coronet Carrington: front bedroom, offside rear-corner bathroom, dinette amidships, with the kitchen split across the rear and side.

At first glance, the bed seems on the small side but it's actually fitted with a bolster that extends the bed base for a length of 1.96m (6ft 5in). Its width of 1.53m (5ft) leaves adequate room either side. The wardrobes are fitted with a few shelves and a drawer, though much of the space on the offside is occupied by the hot water heater. The bedside tables are on the small side so, despite the shelf behind the bed, I'd have preferred a storage nook in the wardrobes - which I've seen and used on numerous other Jaycos.

Beneath the bed is the usual storage space, along with a 100Ah deep-cycle battery, 12V Shurflo water pump and the necessary Breaksafe unit. Additional bedroom storage is provided by a cupboard on the nearside.

The 'entertainment' cupboard on the offside is a particular point of difference between the Sterling and the other vans on test. Not only does it provide a central point for the entertainment gear - optional Sphere flatscreen TV with inbuilt DVD player on a swivel bracket - its grey roller-shutter door closes it off when not in use, neatening things considerably. If only they'd placed the Pioneer stereo system inside the cubby, not below it.

A Heron Q air-conditioner is built into the cabinetry above the entertainment unit, alongside the microwave and a large cupboard comprised of four shelves about 220mm in depth. The 150L three-way Dometic fridge-freezer is mounted off the floor, above the water level indicator, battery voltmeter, hot-water switch and 12V fusebox.

The bathroom shows how a little lateral thinking can pay all sorts of dividends. Because it folds down, the washbasin above the loo, by our reckoning, lends about 200mm of additional space to the main cabin, space it wouldn't have if the basin was permanently fixed behind the toilet. The rest of the bathroom is standard fare: Thetford bench-style cassette toilet, variable-height shower, and 12V fan hatch.

In the kitchen, the Sterling gets a Smev four-burner cooktop with griller and oven (see what I mean about value? Remember, this is the least expensive pop-top on test), stainless steel rangehood discreetly built into the timberwork above, and plenty of general storage space, including a pantry near the entrance. It does lack, however, in the bench space department. In fact, unless you can manage to prepare everything on the closed lid of the cooktop, you'll be chopping your vegetables on the dinette table.

The nearside dinette comes with a couple of lockers above and a powerpoint in the leg space. Access to the storage below is via a drawer - so much better than a hatch, in my opinion, as you won't do your back in as you go through your stuff.

The attention to detail throughout the Sterling is almost first rate: rather than settling for rough holes filled with gobs of silicone, Jayco has finished off plumbing entry points with tidy plastic collars.

I'd be remiss not to mention that one of the locker doors above the dinette was out of kilter (surely an easy fix). We also wondered how long the single plastic hinge for each locker door would last. At this point, a necessary disclaimer: Paul F Hayes, one of the judges, owns a 2005 Jayco Freedom. But, in a way, this fact helped our process. While we wondered about the seemingly flimsy hinges, Paul was able to offer an opinion based on experience: his van was fitted with the same hinges and not once on his many trips around Australia have they required repair. So there you go.

The Sterling's body sits on Jayco's own Endurance chassis, a galvanised structure with punched-hole cross members through which run all the cabling and plumbing necessary in an RV. The bones of the Sterling consist of what Jayco calls its Tough Frame - vacuum-bonded walls incorporating, among other materials, high density polystyrene foam insulation - and a one-piece fibreglass sandwich panel roof. The fibreglass skin (with high gloss finish) is claimed to be 150 per cent thicker than the aluminium cladding commonly used throughout the industry.

Underneath, Jayco has done away with the miles of PVC I've noticed and written about on previous vans. Instead they've used clear flexible tubing that seems more durable and much less vulnerable to road debris. The wiring for the electric brakes goes directly to the brake drum, too, so there's no dangling terminal block waiting to be struck by wayward stones. One 82L gal-protected fresh water tank is mounted forward of the axles and tandem-axle loadsharing suspension, the other to the rear.

Other external features include a fold-down picnic table, Carefree awning, 14in alloy wheels and dual 240V powerpoints. Up front, the drawbar is quite uncluttered, with the 9kg gas cylinders in a dedicated compartment in the front boot. Naturally, this means less room for your camp chairs, hoses, etc. The drawbar also comes with a tap connected to the onboard tanks, but I'd like to see it fitted with a stoneguard.

If value for money is an important consideration for you, Jayco has to be on your shortlist. That aside, the Sterling 17.55-3 is well built and presented, with a competitive equipment level - ours even sported an (optional) external shower.

It's ATM of 2208kg puts it squarely in family wagon or mid-size 4WD territory. Our Holden Colorado ute, while overkill, shouldered the load well, and the pop-top tracked steady and true behind.

With an overall length of 6.97m (22ft 10in), the Sterling is not overly long and, as such, is quite manoeuvrable - handy for those tight caravan park sites.

· More 240V powerpoints inside, especially in the bedroom