The first thing that caught my eye upon entering the Haines Seachange 595QB Elite Offroad caravan was its sunny and spacious interior. Perceptions are everything and, although the timber finish is quite prominent, it’s diluted by the glossy white ceiling and the translucent panels fitted to some overhead lockers. When the sun slides below the horizon, the low-profile LED ceiling lights, which are numerous and well-placed, kick in very smoothly.

In some ways, this layout is a bit different from most ensuite vans, in that the bathroom is an extended corner unit. It’s therefore slightly smaller than a full-width one, but it also takes up less space. There’s nonetheless enough room for a separate shower cubicle and a small washbasin, with the Thetford cassette toilet in between. Additional features include a large wall mirror, overhead lockers, two towel rails on the door, two fan hatches and a small window. 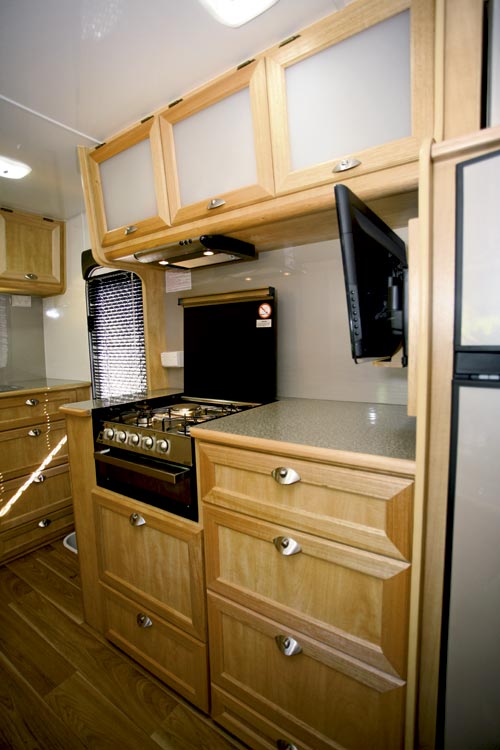 It depends on how you handle the culinary arrangements, but there are a few advantages to this split kitchen setup. It has generous storage, which includes a number of drawers, as well as both cupboards and overhead lockers. All the drawers slide smoothly thanks to double extension runners. Fitted into the side bench is the combo four-burner cooktop/grill and a new model Dometic 190L fridge/freezer. Above that is an LG microwave, which is set back slightly from the fridge but still at a reasonably user-friendly height. The stainless steel sink/drainer is offset to one side of the rear bench, which makes washing up or, more precisely, stacking dirty dishes, a slightly convoluted operation.

Because of its L shape, the leatherette-upholstered dinette can be accessed easily from either end, although I did wonder whether a multi-directional table might be more flexible than the single pole mount. The flatscreen TV could have been located on either side of the fridge cabinet, but putting it on the bench side rather than the bedside means it is easily viewable from the dinette and slightly less so from the bed. But it is much less in the way when it’s folded back. Under the forward seat cushion are both a large drawer and a powerpoint. Although it’s a bit awkward to get to, the powerpoint is probably in the most appropriate location.

Large windows on either side of the front bedroom, along with a Four Seasons hatch, give good ventilation flow. The bed has a queen-sized innerspring mattress on a posture slatted base. The latter is easily lifted to get to the storage space underneath. Wardrobes on both sides and overhead lockers create the required hanging and storage space, as do the angled cupboards (top and bottom) in both corners at the base of the bed. The upper ones both have mirrored doors.

The Seachange 595QB Elite is built with a box-section aluminium frame, which is lined with fireproof polystyrene foam and external fibreglass composite panels. To give a curved look both back and front, moulded fibreglass panels are used and the front panel has been extended to include a good-sized boot. Curved edges are added to the roof, negating the need for weather proofing J-moulds along the roof/wall joints.

Underneath the van’s body, the chassis is manufactured on an aluminium chassis with C section main rails – a little different to the usual steel galvanised setup. Though conventional for an offroader, Cruisemaster independent suspension has been fitted to this caravan.

The 220L polyethylene water tank is located forward of the axles between the rails. At the pointy end, the Hyland hitch is suitable for all-terrain touring.

All of the above adds up to a Tare weight of just 2160kg – not bad for a caravan that is nearly 6m (20ft) long – especially when you consider that it has a load capacity of over 800kg. Not, I have to say, that you’d want to be carrying that much gear!

On the road, towing the Elite was a breeze, especially with the Land Rover I was driving. The van tracked along very nicely and with an unladen ball weight of around 160kg, the Elite should prove towable by a wide range of vehicles.

Seachange Caravans is a relatively new entrant in the caravan market, first appearing a couple of years ago. This might suggest a certain amount of inexperience – but a look through the 595QB Elite indicates otherwise.

Relatively rare in the caravan world, the full aluminium chassis is an innovative feature developed by the Seachange team. This, along with some of the more conventional items – such as the Cruisemaster suspension and Hyland hitch – have resulted in a very capable caravan.

One of the features that really sets the Seachange apart from many other Australian caravan manufacturers is that it uses an aluminium chassis with a 150mm (6in) C section, rather than the RHS (rectangular hollow section) which is favoured by the steel fraternity. While this might seem like a very brave move, The Haines Group, which owns Seachange Caravans, certainly has plenty of experience working with aluminium thanks to its time in the boat-building industry. It’s been my observation, especially in the camper trailer industry, that a lack of experience, rather than anything else, is what usually prevents a greater use of aluminium in a structural capacity. I should note that for vans with a body length greater than 6m (20ft), Seachange still uses an RHS steel chassis.

A result of the aluminium chassis is that a hot-dipped galvanised steel sub frame has to be constructed for the Cruisemaster suspension, which comes with coil springs, trailing arms and dual shock absorbers on each 16in alloy wheel.