I reckon it's always noticeable when a manufacturer tests its own caravans. When the people responsible for designing and building them hitch their rigs up and subject them to a bit of healthy abuse, the van is always better for it. The Goldstream RV 16ft 6in FKST Panther Series is the product of red-track touring and nights camped under starry skies.

Available in on and offroad variants, the 16ft 6in FKST (front kitchen, shower/toilet) starts at $44,500, a sharp price for a 24-footer (overall length) with an onboard bathroom. But the Goldstream guys like to really deck their vans out, and all the fruit you see here costs a pretty penny. But it's a pretty darn attractive rig. At $65,000 as tested, it's at the upper end of the pop-top price scale - it's this level of equipment that gives it the 'Panther Series' designation. 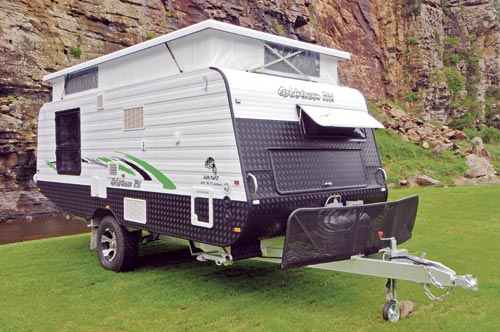 In order to determine if a van would fulfil its duty, you've got to slither underneath. If it's touted as an offroader, are the van's external components adequately protected? Has the manufacturer thought about protection from water ingress or blasts of gravel? Is the suspension up to the job? What about the departure angle?

Our test Goldstream, fortunately, has these bases and more covered. Fitted with an offroad pack, the Panther Series gets 2.5-tonne Cruisemaster independent suspension and a laminated galvanised floor (sheet metal secured to the 12mm marine-ply base for water protection). Underneath, all plumbing and wiring is out of harm's way, while the two 80L water tanks are properly protected from the worst that outback Australia could throw at them. Even the tanks' taps are protected - many manufacturers overlook this. The grey water outlet gets a checkerplate stoneguard, too.

The stone-protection theme continues up front, with a tough mesh guard mounted forward of the dual 9kg gas cylinders, the drawbar's tap tucked behind a checkerplate shield. The drawbar has been fitted with a Hyland hitch for additional horizontal articulation, while the cutaway rear dramatically improves the rig's departure angle when you're traversing rough country. The 450mm-high skirt of black checkerplate - also part of the 'Panther' upgrade - is an equally necessary feature for offroad touring.

On the offside, below the two water fillers, is a town water connection point that's linked to a 40psi pressure reducer.

The lid for the front boot gets an additional rubber seal - a good thing, too, because there's some sophisticated electronics happening behind it. The two 105Ah AGM batteries within the marine-carpet-lined boot are linked to the extremely valuable Redarc battery management system (BMS). The BMS acts as a multi-stage DC-DC charger, 240V battery charger, solar regulator (the Panther is equipped with an 80W solar panel) and more, and its liquid-crystal display lets you know the state of the batteries' charge or how long before they'll be charged. In short, when it comes to your 12V power needs, the unit will do the thinking for you. Also in the front boot is a handy service point for some of the plumbing connections.

At the rear, two jerry can holders are fitted, as is a spare tyre with matching 16in alloy rim. On the nearside, the fold-down picnic table will prove handy for the drinks and nibbles as you relax under the awning. A 12V point has been fitted, too.

In terms of construction, a meranti frame is secured to a 6in SupaGal chassis, its double-ply wall (single ply is what you'll find in most bitumen pop-tops) clad with aluminium.

The first thing I noticed about the interior was the smart Tasmanian oak cabinetry and sensible layout. The next was the good joinery and, the closer I looked, the more apparent it became that the Goldstream folks had put some effort into improving the strength of the cabinetry in line with the pop-top's offroad potential. The locker doors open on gas struts and piano hinges, so they're unlikely to shake loose halfway along the Tanami Track. They've also used 12mm ply for the tops of the lockers, rather than the standard 3mm ply, adding to the rig's overall structural rigidity.

Up front, the kitchen is equipped with a Thetford Caprice Mk III cooktop with griller and oven, though the cooktop only has gas burners - I'd prefer it to have an electric burner, too, in case the gas cylinders run dry. There's an NCE stainless steel rangehood recessed into the cabinetry above, as well as three overhead lockers. All drawers open on metal runners, and the sink gets filtered drinking water. Storage is plentiful, thanks to the large storage locker and slide-out pantry in the entrance.

Next to the kitchen, in the forward offside corner, is the onboard bathroom, a one-piece fibreglass unit with a Thetford bench-style toilet and washbasin moulded in behind. It also includes a variable-height shower and 12V fan hatch.

The offside bench includes a stainless steel LG microwave, which is set into the cabinetry at a good height, a 128L three-way Thetford fridge, and Aircommand Jabiru air-conditioner. Due to the height of the Jabiru, however, the bench sits around 1060mm from the floor, an awkward but workable height when it comes to meal preparation. In a cupboard beneath is the Truma 14L hot water service along with 12V Flojet water pump.

A swivel-arm TV bracket is fitted above the bench on the offside, so you can watch the supplied flatscreen telly, linked to a Winegard antenna, from the bed or dinette. A stereo/DVD player is integrated with the timberwork nearby, as is a 12V socket and antenna for a BYO telly. Opposite, behind the dinette, is another 12V point, so there's no shortage of places to charge your mobile phone.

The dinette itself is perfectly comfortable for two. A hatch is provided for accessing the storage area beneath the dinette but, considering space is a little tight, the better bet would be to remove the leather-upholstered cushions and ply base to get to your gear.

The rear bedroom is fitted with wardrobes either side of the bed, which measures 1.87x1.53m (6ft 2in x 5ft). I particularly liked the dual catches given to each wardrobe door as insurance against it swinging open in response to harsh terrain. The bed - and the dinette - sports LED reading lights. In fact, LEDs are used throughout.

Whether in its entry-level 16ft 6in FKST configuration for circa $44,000, or as the up-specced Panther Series, this is a pop-top with serious credibility. I certainly wouldn't take the base model down the Gibb River Road, but with all the Panther paraphernalia on board, it'd eat up the worst the Kimberley could throw at it. And for that reason - not to mention features such as the Redarc BMS and solar fitout - I know how I'd spend my money.

But if you didn't have the extra $20,000, the base model pop-top would do you proud as you got about Australia, lapping up this magnificent country, its sights, sounds and scenery.

· One electric burner on cooktop in case the gas cylinders run dry.