From its earliest days in 1993, Goldstream RV built its business and niche market appeal on doing what the big boys do – but in a different and more bespoke way.

Rather than innovate, Goldstream has generally followed, refined and improved proven concepts. The company’s first camper trailer, built in a Gippsland chook shed by three former employees of a large van builder, incorporated extra body bracing, a thicker pulley cable and heavier canvas over its pull-out beds than their former employer’s volume-produced product. Greater choices of décor and factory-door personal service were other appealing features.

Not surprisingly, that pioneering camper is still around today and it was proudly wheeled out at Goldstream RV’s recent 20th anniversary celebrations, along with its original owners, all looking remarkably fresh. 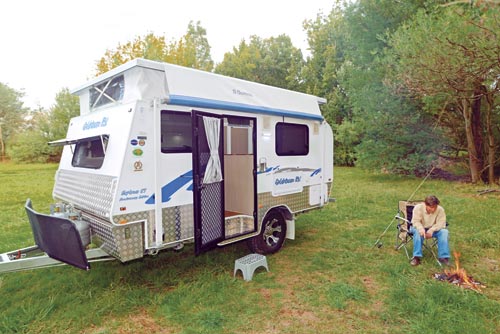 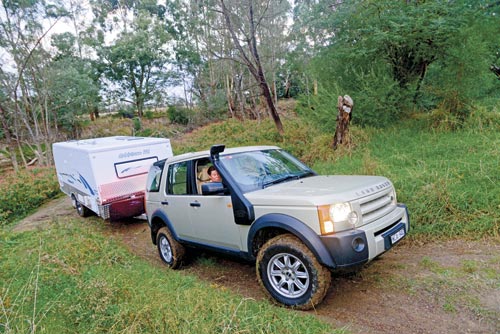 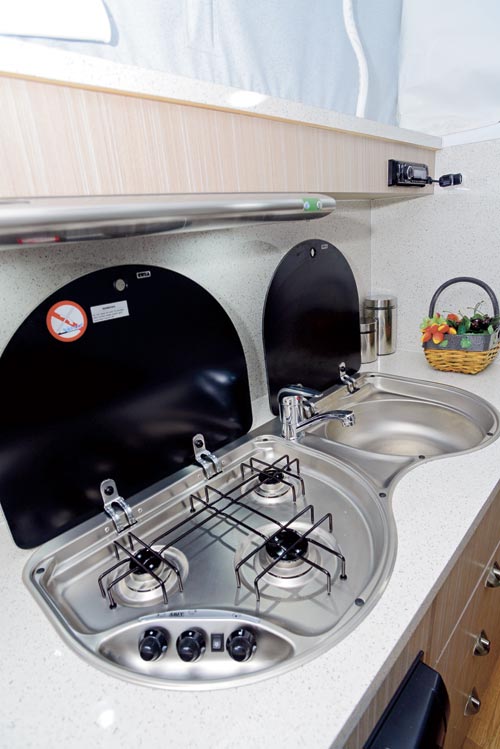 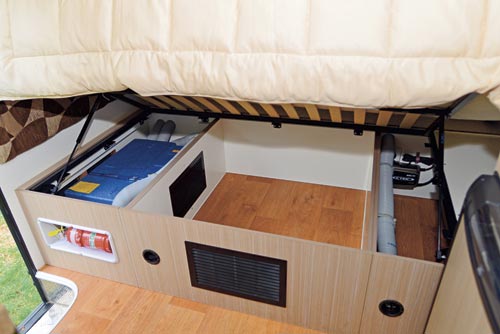 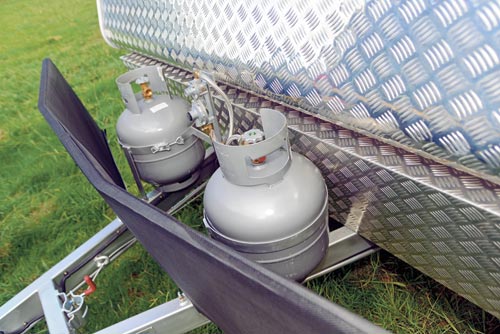 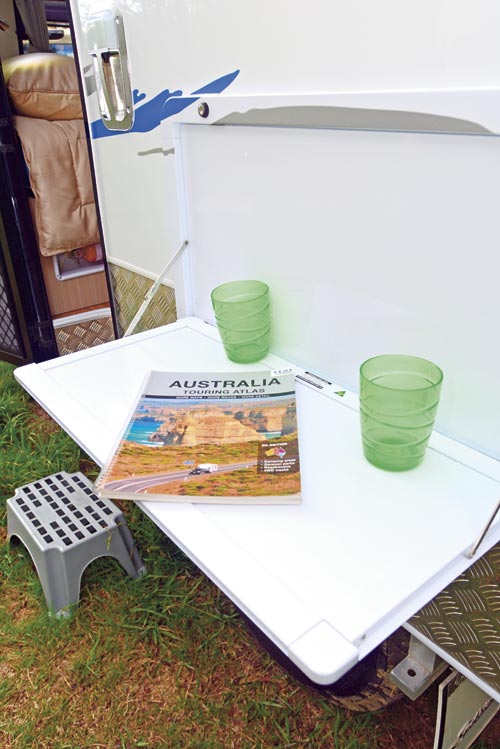 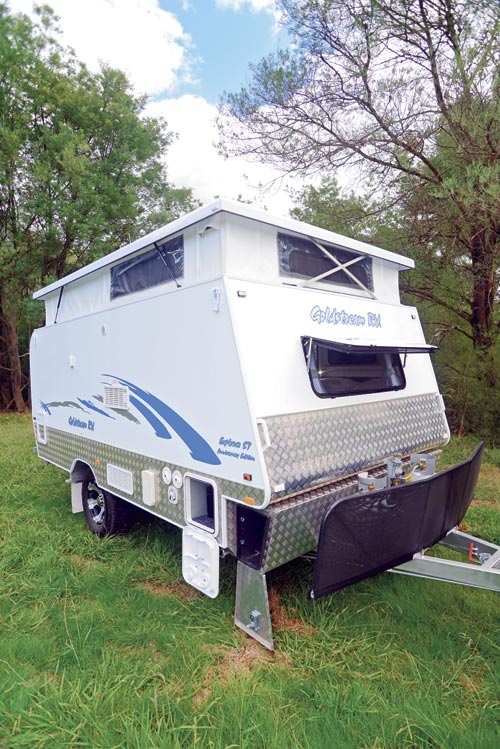 Of course, building a better camper, along with the pop-tops that followed in the late 1990s and the Goldstream caravans that joined the range around 10 years ago, came at a premium price, some of it due to the high degree of hand-building at the company’s modern Pakenham, Vic, factory and some due to the degree of personalisation offered to purchasers.

Along with a myriad of interior décor options, the options list for the Explorer range of 12ft-17ft internal length pop-tops lists more than 80 items, so no two Goldstream RVs are ever likely to be the same.

But to mark its 20-year milestone, Goldstream has made some major changes in its architecture and production. This will allow it to maintain its point of difference over mainstream makers, while offering an even better finish, becoming more modern and dramatically cutting customer waiting times.

Following a major investment in the latest German Beisse CNC machinery, Goldstream has become the latest Australian caravan manufacturer to adopt more efficient computerised, mass-production processes.
All three models in its 2013 range are now being built with the latest flat-pack furniture. It is pre-cut from 16mm lightweight board, sourced overseas and installed like an apartment kitchen, instead of hand-built
‘stick’ furniture.

Adding to the contemporary look is a new range of interior colours and finishes, including ‘sound acoustic’ lino flooring, new-look upholstery and curtains, new door locks and handles, and high-gloss Laminex for the square-edge benchtops.

Outside, the Anniversary models get ultra-smooth and glossy new composite body panels, which comprise an internal rubber core for strength, 19mm foam insulation and 4mm thick painted aluminium on both sides.

It is a dramatic facelift and both Goldstream and its customers share the benefits.

Any fears that the changes may have compromised Goldstream’s long-held reputation for quality and strength were quickly dispelled on our test when we hitched the 14ft pop-top ST model, fitted with the Offroad pack, to our trusty Land Rover Discovery 3 TDV6.

Standard 150x50mm main chassis rails, Cruisemaster coil spring and telescopic shock absorber independent suspension, excellent ground clearance, a Hyland swivelling hitch, generous use of stone-deflecting checkerplate cladding on the front and lower sides, a roof pressure hatch and the absence of a vulnerable built-in step, reassured us of its rough-road capability and gave the Explorer ST a chunky, purposeful look.

There’s no built-in front boot as such – the body overhangs the chassis – but the optional checkerplated, galvanised steel full-width tunnel storage box fitted optionally beneath it did the same job, and is capable of swallowing all the messy stuff like the jockey wheel, electrical and pumping connections, etc.

This is matched by a built-in half-tunnel compartment at the rear nearside, which is capable of holding things like a Weber Mini Q and folding chairs and tables. But, annoyingly, the awning strut blocks access to this compartment when it is not extended. The solution is to remove the strut from its foot to open the drop-down lid, but that’s fiddly.

There’s another compartment up front on the far side which houses the standard 80Ah deep-cycle battery and there is room for a second if you are planning an extended stay away from 240V.

While Goldstream builds pop-top in sizes from 12ft to 17ft internal length, the 14ft Explorer is the smallest in the range to offer a shower/toilet option, something which is now high on the priority list of most RV buyers.

Accommodating all this in a compact pop-top with an internal body length of 13ft 6in (4.1m) is an exercise in logistics that Goldstream has excelled in.

Rather than a kitchen or lounge, the side-hinged east-west double bed with the ducted air-conditioner and storage space beneath, is immediately on your left as you enter the door, while the café-style dinette is to your right. The kitchen, with its three-burner gas cooktop and adjacent sink, both beneath hinged glass panels that double as cutting boards, is ahead and just to the left of the combined shower/toilet ensuite, which also incorporates a washbasin in the right-hand rear corner.

Goldstream’s new 20th Anniversary décor gives the interior of the Explorer ST a bright, modern and inviting look that contrasts with the dark interiors of some earlier Goldstream vans and pop-tops.

But it is the windowless back wall, with its combined oven/grill and microwave tower and hanging wardrobe to its right that are the interior talking point.

The tower is optional but, if you do delete the compact oven/grill, you gain a longer seat on one side of the dinette triple-fold table, but lose the ability to cook toast!

If you keep the tower, it all works pretty well, with the two large double-glazed windows on the kerb side supplemented by the large front window and the four zip-down panels in the relatively shallow pop-top allowing plenty of natural light in.

A benefit of this low-rise pop-top is that you can get in and out of the van and access all functions at roadside stops, including the ensuite toilet, without raising the roof.

Apart from the toast issue, the only real interior negative is that kitchen bench space in this layout is limited, unless you drop the covers on the stove and basin. There is also no window on the kitchen side, which some people may consider a negative.

With a Tare weight of just 1370kg (including the 150kg Offroad pack), the Explorer ST is a modest weight for a pop-top of its size with its genuine rough road capability and it towed along easily behind the Disco 3 on our rough test course.

The Cruisemaster independent suspension, built by Vehicle Components, which includes heavy-duty coil/shocker units on each wheel, supplemented by telescopic shock absorbers, appeared to soak up the undulations very well and, with the Land Rover’s adjustable air suspension on its highest setting, the Goldstream was able to go most places except the steepest rises and deepest creek crossings.

With features like dual water tanks, an 80W roof-mounted solar panel and deep-cycle battery with Ctek charger, the Explorer ticks many of the boxes of a serious offroader despite having a price well below other serious contenders in this category.

True, it doesn’t have quite the extreme ground clearance of the main offroad caravans and pop-tops of its size, but it is tough, well-built and, anecdotally, will go 90 per cent of the places that the $25,000-$30,000 more expensive dedicated offroad alternatives can.

A number of Australian caravan manufacturers are now embracing the sophisticated CNC cutting equipment required to make ‘flat pack’ furniture but, to date, Goldstream RV is the smallest we’ve heard of to make this major move.

It previously took two workers up to four days to build the ‘stick’ furniture for one Goldstream caravan, but the new computerised system
cuts that down to just four hours, meaning customers will wait probably half the current lead-time of up to
eight months for their new RV.

That’s the first plus for Goldstream’s sizeable investment of around $300,000, the most significant in the company’s 20-year history.

The other benefits of the flat pack furniture are all on the customer’s side and include greater strength with no weight gain, as the thicker CNC-cut panels can serve as wall bracing in areas where a frame and plywood or MDF covering were previously used.

But for those customers-in-waiting for whom the pace of change is too fast, Goldstream has offered to complete their RV using the traditional stick furniture and a number of these were on the line when we collected the new Explorer ST for review.

The main question many people will want to ask is whether production streamlining will mean the loss of the individuality and design flexibility for which Goldstream has built its loyal and growing customer base. The answer is both yes and no.

While the pre-cut sandwich walls and furniture theoretically allow less ‘wriggle room’ for customers to make major layout changes, the reality is that most are happy with the Goldstream RV formula to start with and the company has distilled their preferences into the relatively small range of layouts now available within each model group.

The option list remains as long as ever, but if you want a window where one doesn’t exist, or wish to tinker with some other aspects of the standard layout, it now may not be possible. However, Goldstream says ‘talk to us’.