IT WILL LIKELY come as no surprise that we here at Caravan World think very highly of the RV lifestyle. There are few things better than hitching up a van and hitting the road. Making that routine your full-time life, on the other hand, that's a big commitment. But according to Evernew Caravans' Darren French, more and more customers are doing just that.
"We are finding that a lot of people actually live in their van," he said. "They are usually people who take a 12-month trip and decide they just want to keep going. They never go home."
This increase in full-time travel customers saw the Evernew team hit upon the idea of designing a larger rig.
"Traditionally, we would design more standard vans, around 20-21ft," Darren said. "But when more people started looking at the larger vans, we decided to do something a bit bigger."
With the increased size, however, comes increased weight, and Darren admits a larger tow vehicle is needed. "We were wary of that, but people don't seem to have been put off by the weight," he said.
The move to the bigger van has ultimately proven successful, with Evernew's 7.16m (23ft 6in) E1000 selling especially well since hitting the market earlier this year.

ON THE OUTSIDE
First and foremost, this is a great outdoor van. The huge Dometic awning extends to cover the slide-out barbecue, fold-down picnic table and extendable TV arm. Everything you could need under one roof - or awning.
A pair of large speakers pipe music from the interior radio/CD player and a couple of LEDs keep everything well-lit on those summer nights.
But this van is not only about the creature comforts. Checkerplate on the sides and halfway up the front give a rugged look, and combined with a higher-than-usual clearance and 16in alloys with chunky rubber, this is a good-looking unit. But for those who really want to get off the bitumen, the E1000 is also available with coil spring trailing arm suspension (tandem beam is standard) which will see it handle unsealed roads.
According to Darren, the higher (4in) clearance is achieved by using straight instead of drop axles, plus a 2in chassis riser under the 6in main chassis rail.
On top of those axles, the van's frame consists of meranti timber for all walls, while the roof is single-piece Oregon. The tougher Oregon allows for household fibreglass insulation, rather than polystyrene, which is a bonus because it deadens sounds such as the air-conditioner and heavy rain. The whole lot rolls on a 6in galvanised chassis.
The 6in drawbar is home to a pair of 9kg gas cylinders and two jerry can holders, which are protected underneath by a stoneguard. There is also an offside water tap.
One negative on the outside, especially for anyone who wants to stay on the road for a while, is the lack of storage. Other than a large front tunnel, there is really nothing else. More storage can be specified at the design stage, but the lack of room is something of a concern in a large van designed for longer stretches away from home.

SENSE OF SPACE
Not content to let the van's larger size speak for itself, Darren and the Evernew team wanted to increase space perception with the interior colour scheme, which is almost exclusively light and bright. This may not be the norm for such a large rig (and probably not something I would have chosen), but it certainly makes for a nice and airy space which makes you feel you have even more room.
Once inside this light interior, the layout is also not what you would expect. The rear dinette is a huge club lounge with (very) comfortable leather seats and a swivel table. Three adults could comfortably sit at the table, with a fourth if necessary.
This is a pleasant area with windows all-round and the darker grey of the leather contrasts well with the rest of the rig. There is a footrest next to the entry, plus standard under-seat storage and several overhead lockers. And as an added bonus, the table lowers to create an over-sized single sleeping space.
In the middle of the van, the nearside kitchen is a winner. It is home to an overhead microwave, four-burner cooktop with grill and oven, plus a stainless steel sink and drainer. The angled design of the benchtop makes for plenty of space once the cooktop's flush cover is lowered. A 186L three-way Dometic fridge sits on the offside next to another large benchtop, which is actually the cover for the van's well-hidden top loading washing machine.
Like the kitchen and its fridge, the bathroom also covers both sides of the van. The large shower cubicle sits in the nearside and is serviced by a flexible-hose shower, hatch and light - but no window. Sitting opposite, the toilet is also a large space with a vanity, but there is limited storage and almost no bench space.
Up front, the bedroom continues with Evernew's objective of making the interior of the van feel bigger, with a front window, huge windows either side and a Four Seasons hatch above. The queen bed has small tables either side, as well as mirrored wardrobes and corner foot-of-bed cupboards. There are also several overhead lockers and under-bed storage. And in a very welcome move, the front tunnel boot van can also be accessed from under the bed. This may be a little awkward - you have to pull the mattress forward - but is very handy when it's raining.
The bedroom and bathroom are separated from the rest of the cabin by a concertina-style door, which means one traveller can sleep while the other sits up, or you can shower when you have guests at happy hour.
Rather surprisingly, a TV arm does not come standard anywhere inside the van. There are provisions for one in the bedroom and above the extra offside bench, but you have to specify that you want one. I also noticed a few small gaps in the cupboard joins, but Darren pointed out Evernew does not hide the joins because it prefers not to fill the space with plastic as other manufacturers do.
A real, and easily overlooked, positive for the interior is the number of double powerpoints: four in the bedroom, two in the kitchen, two above the offside bench and one in the toilet mean travellers should never be found wanting for a place to plug in their phone charger. 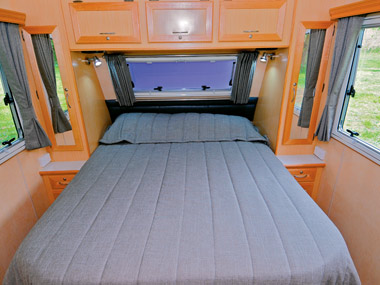 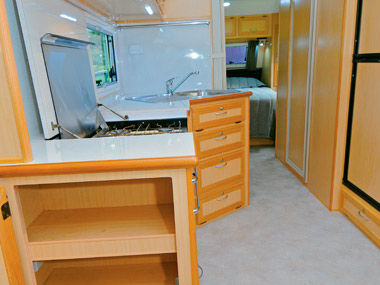 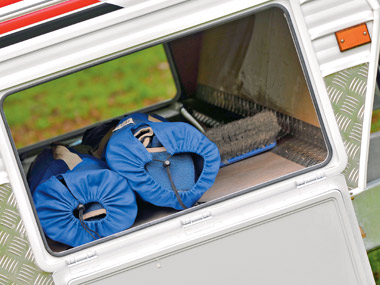 THE BOTTOM LINE
Bigger vans may not suit everyone, but for those who plan on spending the majority of their time on the road - and who have a larger 4WD tow vehicle - they are a perfect place to set-up their rolling home. The Evernew E1000 has loads of space and pretty much all of the features you will need for longer-term travel (it could definitely use some more external storage options), but anything it doesn't have could be added at the design stage.
I would liked to have seen an internal TV arm as standard, but the rest of the interior is a large and comfortable space that would suit a travelling couple down to the ground (or chassis).