A challenge for RV manufacturers, given the tough economic climate, is to build a rig with all the trappings expected in contemporary vans, while maintaining a practical loaded weight for towing.

One way of reducing weight is to cut the van’s length but that, of course, reduces interior space, which presents problems for designers. So what happens when your aim is to build a caravan that could be towed by a Holden Commodore?

Well, Colin Bridge of Brisbane-based Adventure Caravan Centre has one answer: a Diamond Caravans 169 – the 169 referring to a length of 16ft 9in (5.1m). It weighs in with an ATM of 1980kg while retaining the popular layout of a front bedroom and full-width rear bathroom. 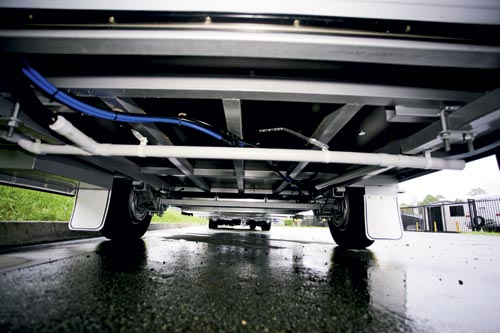 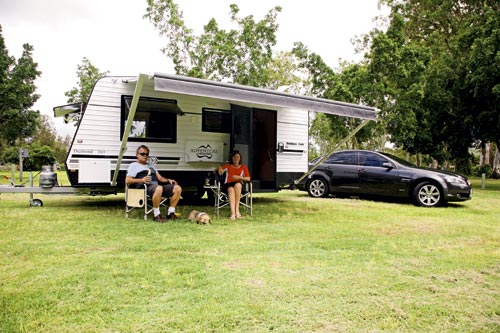 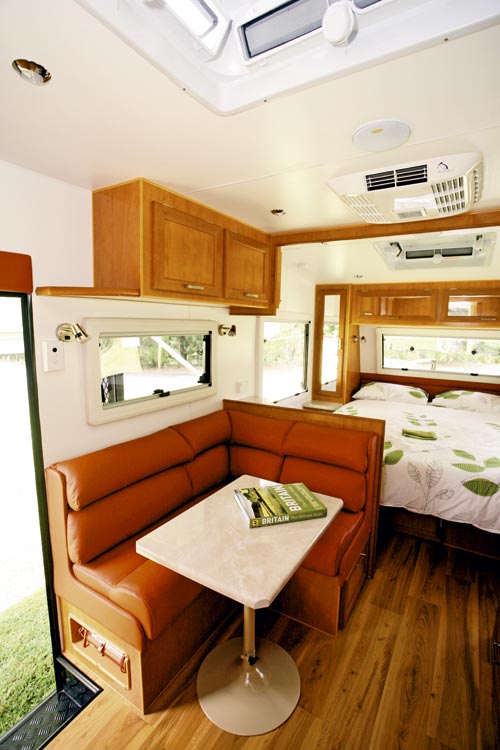 Getting back to the van, it has a rear entry door and stepping inside reveals the bathroom to the right, kitchen bench opposite, dinette to the immediate left and an island bed up front. Apart from the white walls and ceilings, the other dominant colour in my review van was orange, which might sound a bit odd but the burnt orange for the stain hue of the cabinetry and a lighter shade for the dinette upholstery was actually quite effective. Each of the windows come with integrated blinds and insect screens.

The advances in LED energy-efficient technology have been well adapted by the RV industry and this van is no exception, with nicely-spaced downlights and reading lights for the bed and dinette.

If anything, the 169 reflects the significant change in caravan layout during the last decade and how priorities have altered. For a start, there’s the island bed at the front and the full bathroom in the rear. Because these items are difficult to downsize without practicality problems in a 16ft 9in van, it’s the kitchen bench and dinette that have to be slightly reduced. Not that they are unusable, I should point out, just more compact.

There are several items that no kitchen bench should be seen without, so a four-burner cooktop and grill sits alongside a stainless steel sink with drainer. In order to maximise space, an under-bench 128L three-way fridge has been used. The microwave is fitted into the overhead lockers.

Being a slightly smaller kitchen, there is also less storage area than might be regarded as normal, with two drawers, two overhead lockers, one cupboard and a floor locker. However, the diagonal cupboards (top and bottom) in the bedroom alleviate the situation somewhat.

At the forward end of the kitchen, the overhead locker area is used as a type of technology junction – one door hides the hot water and 12V switches, and the other hides the TV connections. Not hidden are the radio/DVD player and the flatscreen TV mounting.

In a van of this size, locating a suitable mounting point for a flatscreen TV is a bit tricky but the front end of the kitchen bench is a reasonable compromise for viewing from both dinette and bed.

Opposite the kitchen, the L-shaped dinette seat will fit two people and is orientated towards the entry door. The single-pole-mounted table measures 0.7x0.5m (2ft 4in x 1ft 8in). Above the dinette are two overhead lockers.

Up front, the innerspring mattress measures 1.83x1.52m (6ft x 5ft). It sits on a gas strut-fitted posture slat bed base that is mounted above a compartmented storage area.

With windows on all three sides and mirrors on both wardrobe doors and overhead lockers, there’s certainly no issue with cross-flow ventilation and natural light.

Given the shape of the space available, quite a few rear bathroom layouts, such as this one, look similar. Nonetheless, filling the nearside corner is the shower cubicle complete with flexible hose and variable-height fitting. That leaves the opposite side for a Thetford cassette toilet, which still leaves room for the expected vanity cabinet complete with contemporary square washbasin, drawers and cupboards.

Additional features are the overhead lockers above the loo and towel rails mounted on the bathroom’s sliding door. Ventilation is handled by a fan hatch in the shower and a small window above the toilet. I’d reckon, though, that a second fan hatch in the ceiling above the latter wouldn’t go amiss.

All this is built into an aluminium-framed and aluminium-clad body that comes with a Camec security door and Mobicool acrylic windows. There’s no front boot; instead, a good-sized tunnel boot is fitted with access only from the nearside – the hot water heater takes up the door space on the other side. Alfresco accessories include an Aussie Traveller awning, picnic table, LED wall light, and grab handle light.

Underpinning the caravan is a 100mm-railed DuraGal chassis, the drawbar rails of which run right back to the leaf-spring suspension mounts. Both 90L water tanks are mounted forward of the axles and protected by galvanised sheeting.

So, how do you build a Holden Commodore-towable caravan using the contemporary layout of favour (front bedroom/full-width rear bathroom)? It’s quite simple – you compromise with a smaller dinette and kitchen bench to reduce the van’s length.

There’s certainly nothing wrong with that, especially if the result is a lightweight caravan with plenty of creature comforts!