AS A WELL ESTABLISHED camper trailer manufacturer, Adelaide's Desert Sky is accustomed to squeezing plenty of features into small packages. Last year the company dipped its toe in the caravan market for the first time with its compact Desert Tracker offroad van. But with the introduction of its new (and even smaller) Warrior, Desert Sky is now one of only a few companies blurring the lines between camper trailer and caravan. And this is not a bad thing.

You get the ease of towing and decent offroad ability that a lightweight camper trailer offers, and the convenience of no set-up accommodation offered by a hard-top caravan. It seems the ideal middle ground for those who may be too old or tired for camper trailering, but who also don't need a large caravan that won't be able to seek out the more far-flung camping spots.

You don't get an ensuite with such a compact van (although Desert Sky is working on it), but you do get two single beds, a decent-sized dining area, good kitchen, ample storage and solar power for self-sufficiency on those treks into the wild.

Desert Sky proprietor Rudi Vester is an active member of an SA 4WD club and proudly advertises his Adelaide-built offroad vans as "Designed by a 4WD driver for 4WD driving". Hitched up to our Nissan Patrol, we effortlessly negotiated the offroad inclines and descents of our Adelaide Hills location, suggesting it could handle a lot more than we could throw at it.

With a Tare of just 1340kg and an ATM of 1600kg, the Warrior also wouldn't need such a big vehicle to tow it with, opening compact caravanning to the vast majority of smaller 4WD owners. Towing is also helped by a width of slightly more than 2m (6ft 9in) - the same width as many large 4WDs - and with an overall length of 5.2m (17ft), it will prove far more amenable to tight parking than your larger options.

The Warrior not only needs the ability to go anywhere, but also to stay in one piece over harsh terrain. Its chassis is laser-cut galvanised steel and comes complete with a sealed galvanised floor to keep water out during creek and river crossings. Cruisemaster independent suspension with heavy-duty Gabriel shock absorbers is designed to perform over the rough stuff, while a set of 10in electric drum brakes will be welcome on those gradients.

It looks a solid little thing from the outside, too, and giving it a good once-over, I was satisfied it was tough enough to handle some major adventures. Its frame is standard meranti timber with an attractive aluminium-clad body. Checkerplating covers its lower sides nicely, extending necessarily high on the front and rear walls. Considering the good approach and departure angles, this checkerplate will be most appreciated out in the bush.

The Warrior's integrated front boot is different to the manufacturer's Desert Tracker, making it look more aerodynamic than its more slab-faced predecessor.

On the subject of aerodynamics, I asked whether the Warrior would have been better as a pop-top to lower its centre of gravity when on the road. Rudi told me that he did flirt with the idea, but concluded it was "nice to have the permanent hard roof", even if it was at the cost of it sitting higher than the tow vehicle.

The Warrior is a diminutive van, so it was never going to be roomy inside. The layout would be best described as "cosy", but there's no faulting the way Desert Sky has made good use of the available space. It would be a much appreciated step up in comfort, convenience and space for the average camper trailer owner.

Our test van had two single beds, making it ideal for couples who don't need to sleep at close quarters, two mates on a fishing trip or even a father and son expedition. In other words, it's a versatile setup.

However, Desert Sky can supply the van with an east-west double bed, which should, actually, lead to a bit more interior space.
The innerspring mattress beds lift to reveal good storage space, which is at a premium in a small van. There's no room for a full-height wardrobe, but a clothes cupboard that would suffice for most trips fits between the beds. Overhead storage is limited compared to most caravans but, again, it's pretty good and very accessible when compared to a camper trailer.

The lounge is the most successful aspect of the design, with comfortable seating for three adults around a swivelling dining table. There's a single seat just beside the door, facing a two-seat lounge, ensuring two people will have room to properly relax. There is a potential hazard of knocking your head on the corner of the control panel cupboard above the lounge, but this is (somewhat) understandable with the limited space.

At the front, the kitchen is another example of a step down from your usual caravan, but a step up from a camper trailer. A 110L Aircommand fridge is fitted into the kitchen, and a few drawers and under-sink storage (with pantry) will suffice for most of your food and crockery needs.

There's no space for an oven, but a Smev three-burner is fine for those not planning on roast dinners every night, and is part of a sink combo that is the best option for the space available. There is even a good area for food preparation (you can never have too much), and as with the dining table, it is finished in attractive faux marble effect that works with the wood veneer finish for the furniture to create a sense of quality.

With 240V wall sockets and a bit of bench space you could also get a microwave in here, while a small LCD TV on a swivelling bracket is a standard feature.

It feels quite light inside the Warrior, even though it's hardly awash with windows, which feature attractive Dometic blinds with built-in fly screens. There's LED lighting inside, and as with the other electrical items in this van, they are powered by 12V - twin 100Ah batteries, twin 60W solar panels and a Projecta battery charger also come with the van, and with 145L of fresh water capacity, you could stay self-sufficient in the Warrior for some time.

In terms of payload, there's only 260kg to play with (115kg if you fill the water tanks to capacity).

Caravan layouts are often about compromise, especially when you have a van with a body slightly more than 4m (13ft 1in) in length. There isn't much space for moving around inside the Warrior, but it is an excellent alternative featuring no set-up in order to have your bed for the night, enclosed cooking and eating facilities, and the luxury of a comfy lounge in front of an LCD TV.

Throw in the fact that the Warrior will follow your 4WD to places normally only suited to offroad camper trailers, and there is a definite market for this talented little offering. With a price tag of $38,000, it also pitches itself in the more upmarket camper trailer price range, not to mention anyone else who has battled setting up a camper on a wet and windy night. 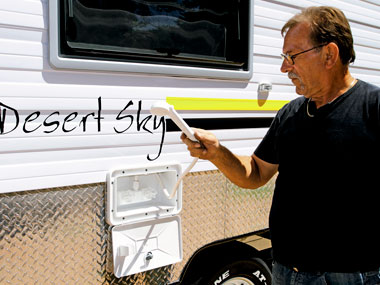